I have to admit the fact that 4 years ago I despised running with a passion that consumed me. I was overweight and under-motivated; my favorite meal consisted of a McDonald’s combo that would turn the stomachs of all but the most hardy teenagers. I had bad knees, a bad back, and slept poorly. My wife, a competitive runner throughout her earlier years, decided it was time for us to make a change. Like all dedicated couch potatoes, I resisted, and stubbornly. I liked my McDonalds, bags of Doritos, and gallons of Mountain Dew entirely too much to quit, until one race day. My wife ran a half marathon, and I agreed to run her and a friend in the last mile. They ended up running ME in, as I couldn’t even complete a full mile. She still PR’d despite my lagging behind. As I sat near the finish line, completely out of breath and close to hurling (the race was at 9,000+ feet), I knew it was time for a change, and a big one.

Don’t assume that I was a candidate for the biggest loser, although in the photo below I may have looked like one. I was average in nearly all respects according to our society. I wore size medium in all of my clothing, and I enjoyed snowboarding, mountain biking, and soccer. So what if the clothing was bit tight, and the soccer games usually wound up with me at the goalie position? I was finally forced to face the question – was I healthy? Decidedly not. I wanted to feel better. I wanted to walk up a flight of stairs in Colorado without stopping to rest. Remember being a kid, and everything was so important that you ran to get there? You didn’t arrive out of breath, weezing, and needing to hurl. I wanted that back. 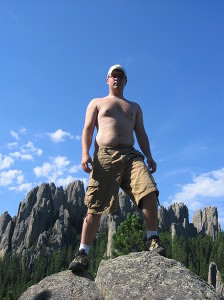 Since childlike wonderment at the site of a large (at the time) anthill, dog doo pile, or your friend’s cool new bike was largely out of the question (I still drool over brand new toys, they are just bigger in scope), I decided to start with food. I ate healthy, learned portion control, and started making a conscious effort to think of fruits and vegetables as a food group, rather than something picked off of a Whopper. After dropping several pounds over several months, I laced up a pair of old sneakers and cautiously stepped out the door. The rest, as they say, is history. That first year I completed over a dozen road races under ten miles, and four half marathons. I started small, with progressively harder training plans. I entered into races just to get the feel of crossing the finish line, and the excitement of the starting gun. I’ve now finished two full marathons as well. And I feel great. Just look at the photo below – that’s me (almost 50 pounds lighter) in the center with none other than the founder of AGR running me in. 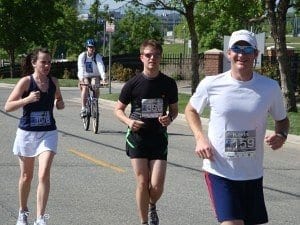 Last year was a year to scale back. I’d dealt with numerous small injuries over a period of 3 years, and wanted to ensure that running would become a life time enjoyment. I studied form, talked to coaches, and consulted my wife and other running vets. I became faster, and achieved several shorter PR’s, from 5k to 10k’s. I intend to keep progressing, as I’m attempting to lay a solid foundation for years of running to come. I’ve tested several different shoes, from road to trail, and even learned to run barefoot. What would this year bring?

For this year, I’m undertaking a different sort of journey. I’m not running to train for a race, not running to achieve a PR, and not running to change form. I’ve running to run. I’m taking a journey to see what discipline and dedication to running brings. I’ll be running on every single day of this year, and maybe beyond. There are no excuses, no days of being too tired, no days where work ran late. If the year shakes out as planned, I’ll run in 5 different states, 2 different continents, 3 different countries and all manner of weather. I’ll be too cold, too hot, and too stressed out to run, but I’ll do it anyway.

For some of you, this is your life. I’ve already talked to people who take only 2 or 3 days off of running a month – for the past decade. I’m not you. I’m not especially athletic, and I’ll never compete to be the best in anything. I’m your typical average guy with a wife and kid. I don’t own a minivan, but it’s really not out of the question. For me, this is a huge undertaking, and I’d like to take AGR along for the ride. So once a month, I’ll be updating you on my progress. If I fail and miss a day, that’s it. I won’t quit running, but it’s going to be all or nothing. I’m not going to feed you a line, or embellish my mileage.

I am laying out some ground rules, however. I won’t run with a serious injury. I’m familiar with aches and pains. I’ve run through shin splints and plantar fasciitis, but I cross trained through a stress fracture because it was the right thing to do. My minimum day is 30 minutes of continuous running, whether that be hill workouts, sprint training, or just plain old distance running. I will be running barefoot, usually one to two days a week, but only because I laid the foundation for it last year. I will run various road and trail races. Some days I’ll run at faster than a 7 minute pace (I did clock a mile at just under 6:30 last year, not a PR but an accomplishment – we’ll see if I can get there this year) and some days I’ll run at an 11 minute pace. I’m going to stay healthy, and have dedicated recovery days – usually running my minimum, and then walking, stretching, doing yoga, or hanging out in the sauna at the gym. Above all, I want to finish. At the end of every month, I’ll update you on my mileage, training notes, and how it felt. I’ll keep you in the loop on where in the world I was, and whether or not I’m feeling injured.

I’d like to take you along for the journey because I really believe that if I can do it, you can too. Just because you can’t qualify for the Boston Marathon doesn’t mean you should feel substandard. Running doesn’t belong to a select few. It should belong to all of us – so with that in mind, Happy New Year, and I’ll see you out on the road.