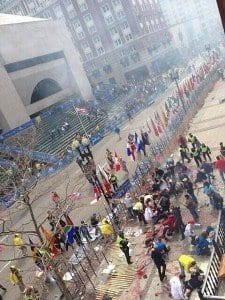 The 2013 Boston Marathon has experienced 2 explosions about 20 seconds apart at the finish line on Boylston Street.  The was a lot of bloodshed close to these explosions with reported 3 dead and at least 100 treated for injuries.  First reports say there were two bags sitting against the buildings where the explosions occurred.  Windows of buildings were blown out and it is said that these bombs had shrap metal in them.  After initial reports, the bombs were considered to be IED’s or improvised explosive devices that were remotely detonated.  The explosions happened at approximately 4:09 into the marathon.  Currently, the marathon has been temporarily suspended as officials want to focus on the injured from the 2 blast. 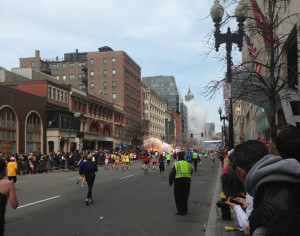 Observers say they saw a white cloud of smoke as people near the explosion fell to the ground. Emergency personnel rushed to the explosion within 30 seconds to check on the injured and clear the area.  Having covering the Boston Marathon in years past, police are often there for crowd control as that is typically the challenge during the day. 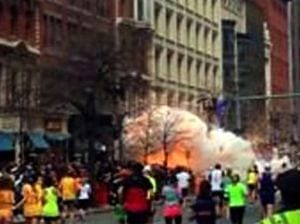 At a large marathon such as the Boston Marathon, there are millions of spectators and runners roaming the streets.  Since many of the people at the Boston Marathon aren’t Boston residents, they are scared and don’t know where to go except for away from the explosions.

Running a marathon is often one of peoples greatest life accomplishments.  Marathon events in general are typically loaded with positivity and this is a travesty in the running community.