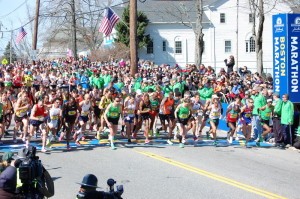 This year was the running of the 115th Boston Marathon.  In past years, I watched the Boston Marathon on TV, but it was just another event to me.  This year, I decided that it was time for me to see what all the talk is about, so I decided to book my plane ticket and head to Boston.  Given that I had never been to Boston, MA before, I thought it would be a great idea to see the city and experience the Boston Marathon. 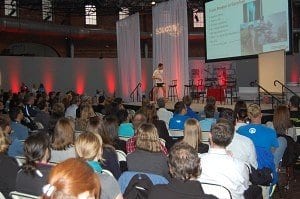 I got into Boston on Thursday before the race and went from the airport to a Saucony minimalist/barefoot event.  The event had a panel of speakers that was very impressive.  The line-up included:

The event was open to the public and was aimed and helping runners and non-runners better understand barefoot/minimalist running.  With barefoot and minimalist running in the spotlight these days, education about the transition is very important.  In my mind, the event was extremely informative because it wasn’t as much focused on Saucony showcasing its new running shoes, but it focused on the science of barefoot running.

It was great to come in on Thursday and see the build up for the race.  Living in Denver, I get to see a few of the local marathons including the Denver Rock & Roll Marathon.  The setup for the Boston Marathon seems to come a day earlier than other races I have seen in previous years.  This I found to be nice because it gets your blood flowing and thinking about the race. From Friday on, there was an electricity to the air.  Every turn I made, there were thousands of elite runners doing their thing to get ready for the race.  This can also be seen at other marathons, but since much of the race field has a stringent qualifying time, many of the runners are in tip top shape.  The race qualifications are as such:

While we are on the topic of qualifying times, I have to get on my soap box for a minute or so.  If you notice, the times for 2013 are going down.  I think it is awesome that with almost 28,000 entrants for the 2011 Boston Marathon and the race selling out in 8 hours, that they can lower the qualifying times.  It is definitely not a marathon that most people can qualify for, but for those that do, it is a great accomplishment.  My main issue with these qualifying times is in the women’s qualifying times for those that are 18-34.  I have been running for 20 years now and I run with a lot of women.  Most of the women are talented runners, but I would not consider them elite or “amazing” runners.  Sorry ladies!  These women can typically qualify for the Boston Marathon in the 18-34 age group.  Now it is few and far between that I run into a man that can run 3:10 or under in the same age group.  And while I don’t run into many male runners of this caliber, I am ok with the qualifying time.  But with the qualifying times going down in all groups, I feel that the women’s 18-34 group should be lowered to at least 3:30, if not lower to make it a little more balanced.  I have spoken with a number of runners both female and male and it seems that I am not alone in my view.  Take my opinion as you will.  If you do have a different view point or would like to support my view, I welcomed comments!

Being part of the media, I get to have special access to particular events and runners.  One of the events that I enjoyed was the introduction of the elite athlete field including American favorite, Ryan Hall.  It is amazing to see how humble the elite athletes act during these press events.  Now I have never talked with or interviewed athletes in other professional activities such as basketball and football, but I am going to go out on a limb and say that runners are much more grounded than many other athletes in other sports.  Being a runner myself, I think runners in general have a little more relaxed and humble attitude, especially during training season when the endorphins are kicking in.

While in Hopkinton, the pre-race rituals reminded me of many other marathons.  Before the start of the Boston Marathon, there is always a group of cyclist that ride the course, I would estimate about 50 cyclist.  The first group of people that start the Boston Marathon is the mobility impaired group.  The groups that started the race next were the push rim wheel chair and handcycle participants.  Following these groups were the elite women’s, elite men’s and rest of the runners.

The women’s race was an exciting race to watch.  To start off the race, American Kim Smith set a very aggressive pace for the women.  At the half way point, Smith had a time of 1:10.52.  Smith led until mile 18 when she started to pull up with leg cramps and the rest of the lead pack caught up.  Fast forward and with 800 meters to go, the race was down between 3 women; Caroline Kilel, Desiree  Davila, and Sharon Cherop.  Desiree started to push the pace and the race came down between Caroline and Desiree.  With 400 meters to go, the leaded switched back and forth and back and forth, but in the end Caroline Kilel edged out Desiree Davila by 2 seconds.  Caroline Kilel of Kenya finished in 2:22.36 and Desiree Davila of the USA finished in 2:22.38. Kara Goucher of the USA finished in 2:24.52 and placed 5th. 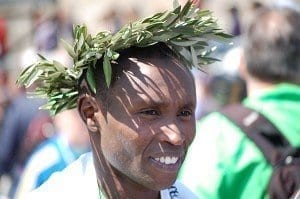 The men’s race started out with Ryan Hall of the USA setting a strong pace and was in and out of the lead until mile 18.  After Geoffrey Mutai and Moses Mosop of Kenya took the lead and not much changed after that point as far as the lead goes.  The race ended with  Mutai edging out Mosop by 4 seconds with a world and course record of 2:03.02.  Winning the race, Mutai wins $150,000.  Setting a course record and world record adds $25,000 and $50,000 respectively, totaling $225,000 for Mutai.  Not a bad days work… American runner Ryan Hall came in 4th with an American marathon record and what would have been a course record in a time of 2:04.58.

The Boston Marathon in 2011 had some amazing times, but not without controversy, at least from some of the press.  The race this year had a tail wind that had a lot of the press asking questions about legitimacy of the times runs.  For the people questioning the times run, I would like to offer my point of view.  Tail winds are great and I am sure they can prevent a little fatigue and maybe even push a runner along a tad.  When a runner signs up for a race, they do not sign up for a race with a tail wind and perfect temperature.  They sign up for a race that has a chance for warm or cold weather, a headwind or tailwind, sunny or cloudy, and rain, snow or sleet.  No runner knows what the weather will be like on race day; so to discredit a course record and a number of good times run in the 2011 Boston Marathon, it is a shame.

The Boston Marathon is an event to remember.  Between the amazing athletes and times they run, the thousands of fans lining the streets, the great food and culture of Boston, and the list goes on and on.   And while this was the first time I attended the Boston Marathon, I plan on attending for many years to come.

For more information on the Boston Marathon and finishing times, please visit BAA.ORG