This year I decided I would challenge myself and push beyond my thought up limits in running.  As somewhat of a last minute decision, I decided to run all 6 days of the Gore-Tex Trans Rockies Run.  Last year, I was invited to run one stage or all and due to time limitations, I ran one day.  After experiencing one day in 2010, I thought running all 6 days would be a good challenge and give me some insight to a breed of runners that like to push their limits. 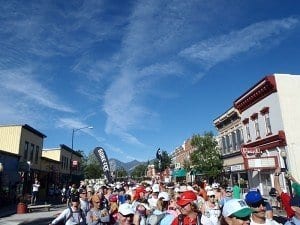 The race started in Buena Vista ( BV ), Colorado which is a small mountain town in Colorado.  With the ever popular Arkansas River running through the town, BV has often been a destination for kayaker’s and white water rafting adventure seekers.   When hundreds of skinny runners entered the town, BV was very happy.  These small mountain towns often survive on small events such as these for revenue, so I find it a nice way to support the small mountain communities.  The day before the race, most runners picked up their race bibs and their goodie bags.  Bags included a numbered Gore-Tex Trans Rockies Bag that was filled with people’s belongings and transported from destination to destination while the runners were out running.  After picking up my bag and going through registration, there was a dinner for all the runners in an elementary school gymnasium.  Here, the race director, Cynthia Amon from Gore, medical officials, course officials, and more explained their role in the race and what we needed to know for the upcoming week. This was nice because it helped calm the pre-race jitters and it gave us a glimpse as to what we would be eating for the next 6 days(good food!).

On the morning of day one, I had my bag packed and had it picked up by the logistics crew.  After that, it was me, my partner Billy Brown, my running gear, and about 300 other runners.  The first day of the run was 20.9 miles and 2,550 ft. of elevation gain with 3 aid stations spread throughout the course.  I packed up my camelback running vest with the required items (small med kit, emergency blanket, jacket, gloves, hat) and I also made sure I had salt tabs, 3 liters of Accelerade, a hat, body glide and sunscreen pre-applied, camera, and an energy gel by GU.  One thing that my teammate Billy and I realized early was the importance of replenishing salt that is lost through sweat. I took salt 30 minutes before the run and every 30 minutes during my run, my teammate did not take as much.  The difference was obvious after 17 miles.  My teammate started to cramp up and I felt ok.  The following days, both Billy and I made sure to take our salt tabs. 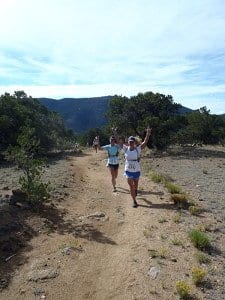 The course of day one was fairly exposed to the sun, so it was important to stay hydrated for all the runners running.  Since the course had some hilly sections and there were 5 days of running to come, many runners would fast hike on the steep portions and keep a little energy stored in the tank.  The elite runners typically run all sections.  While out on the course, my partner Billy Brown was cramping up and who better to help answer questions was the one and only Dean Karnazas.

After speaking with Dean at the aid station, Billy and I continued on running stage 1.  After finishing in a time of 4:24:11, we went to the river which was 100 ft away from the finish line.  Since the water was cold, it was a great way to cool down and allow our legs to recover a little.  This was common practice after every stage and many runners found it to be a nice way to rest, relax, and recover.  When our legs were numbed up, we decided to take the shuttle back to camp where there were about 30o tents set up.  There is also a portable shower truck that travels with the race allowing all runners 5 minute warm showers.  After showering, myself and many other runners had to the chance to talk about the days course and eat a few snacks.  A few hours later was followed up by a catered dinner and the days course awards.  After the awards, the course crew talked about the following days course and showed us a Google earth fly-over of the course which was great because it gave you some insight as to what you were getting into the following day. 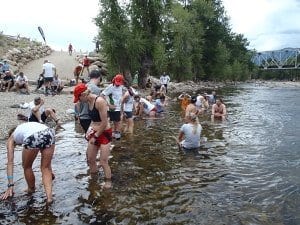 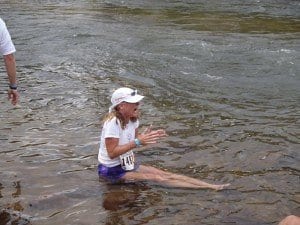