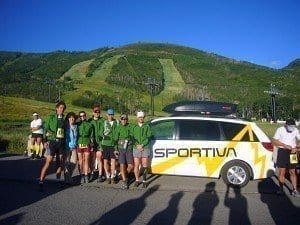 Continuing to deepen its roots in the trail running scene, La Sportiva continues its efforts with the Mountain Cup trail running series.  I recently ran the Jupiter Peak Steeplechase on August 7th, 2010, a 16 mile trail race in Park City, UT.  The race started out with about a 1/2 mile fire road to allow runners to organize themselves by their set pace.  It then transitioned to a single track for the majority of the race up the mountain.

The surface of the trail was primarily hard packed dirt, with occasional sections of rocks and roots.  The hardest part of the race was the ascent up Jupiter Peak, which had many people begging and pleading for mercy.  Though it was nice to summit Jupiter Peak, the race director decided to play the devil as there was another uphill climb a half mile after running down Jupiter Peak.  After, it was pretty much all downhill though. The scenery throughout the race was absolutely gorgeous as the mountain wildflowers were in bloom and we had a blue bird sky above to keep us smiling.  It is hard to beat Park City, UT in the summer time.  The weather is usually between 50-80, perfect running weather. 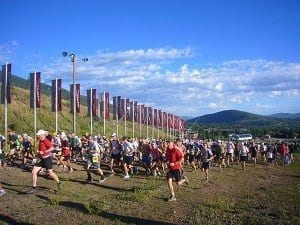 To keep the trail in good condition, the race director put a cap on the amount of runners to minimize wear and tear on the trail.  This is very important because if a race has too many runners, permanent damage can sometimes be cause to the trails.  After the race, Gore-Tex had their mobile van there that you could take a cold shower.  The shower was the perfect complement to a hard run in the sun where sweating was not hard to come by.  And although Gore-Tex would have preferred it to be windy and rainy so the participants could put their product to the test, all the runners were just as happy to use their mobile shower. 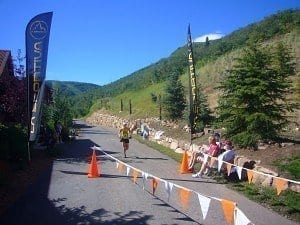 Now we have to admit, the Jupiter Peak Steeplechase is not for the faint of heart, but if you are looking for a run that is a little milder to suit your taste, there are plenty of other runs that will require less effort.  For all you out there that are super competitive and are looking to pay the bills, the Mountain Cup Series has $25,000 in prize money.  This is big money for the trail running scene, but you will have to keep your day job until next year.  The race series has concluded for the season, but if you are one of those people that like to plan out your race schedule far in advance, this race series is a must, even if it is only running one of the races.  For more information, please visit  MountainRunning.com/mc

* All photos courtesy of Giulia Delladio of La Sportiva