When many of you think about Steamboat Springs, CO you think about the world class ski area pictured below.  However, Steamboat Springs, also known as simply Steamboat or the ‘boat by many Coloradans, is also incredibly gorgeous in the summer.  Wildflowers sprinkle the valley and open fields on the ski slopes. The area is also surrounded by National Forest land and has tons of beautiful trails for hiking, mountain biking, and of course trail running.

Steamboat has its’ very own trail running series, now in its’ 14th season.  The trail running series has races for all different abilities, covering as little as 400 yds during the 4th of July Steamboat Sprint and up to 50 miles during the Run Rabbit Run 50 mile ultra. The series kicks off in late May and finishes with the 50 miler as its’ grand finale in September, just before the snow starts to fly.

Last weekend I made the drive to the ‘boat, about 3 hours from Denver, to run the Mt Werner Classic.  When I read about the trail race I was totally pumped:  just under 5,000 ft of elevation gain in a little over 12 miles, getting the chance to run on the ski resort on the same runs that I am usually taking wide turns on with my skis, and entering my first zero waste race.  Yep, that’s right, the aim of the race director, Emily Conjura, was to have a zero waste event and remain as environmentally friendly as possible.  So how did Emily do it? For starters, the race was completely cup-less. Every runner had either a hand bottle or hydration pack, which leveled the playing field because everyone with a hand bottle would have to stop and fill up at the aid stations or people with packs would have the extra weight of hauling a race worth of water. If you didn’t own a hand bottle, there were Ultimate Direction bottles for sale before the race for a mere $5, a great deal! I went with a hand-held and only filled up once at the 6 mile water stop; there were ample supplies at each at station (plus some much needed cheering) which were at approximately mile 2, 4, 6 and 9. 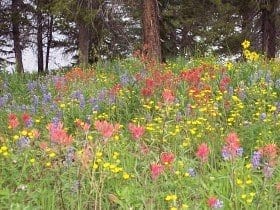 The race course was absolutely beautiful.  I have done my fair share of trail runs in CO and this one is my favorite so far.  Despite having to keep my head down for some of the many twists and turns, I looked out over the valley and at the wildflowers every chance I got.  The view from the top of Storm Peak was spectacular and the guys at the aid station were very encouraging as well.  I would say that most of the trail was winding single track on the way up, minus a mile or so around mile 5-6.  The run down to the finish line was fortunately a fire road and runners, myself included, were able to let there legs really go on the decent.  Overall, this was a very tough and rewarding race.  It wasn’t until today that I realized the elevation gain was 4770 ft, I kept telling myself that it was only 3000 ft.  I now feel a bit better about my time:)

There are a few other races left on the Steamboat Springs Running Series, so please check out their site and register ASAP.  The race series is becoming more popular each year and the Mt Werner classic sold out this year for the first time in history!

Here are a few other ways that the Mt Werner Classic stayed true to its’ goals. The race was also capped at 125 runners for both the 5 mile and 12 mile option to prevent overuse of the trails.  After the race, runners were given the opportunity to recycle their shoes with Soles4Souls.  The schwag included a visor by HeadSweats, pictured below, which is made from Cocona or coconut fiber which is produced using sustainable methods.  And last but not least, all of the food was organic and local, when possible. The race director, her family, and local eateries teamed up to provide a nutritious and delicious offering of salad, pasta, fresh fruit, homemade humus, and breads. Eating post run is not usually my thing, but I made a point this time to enjoy the food while stretching out on the grass near the gondola. Did I forget to mention that all left overs were composted, reusable dishes and silverware were used, and the amount of trash generated by the entire race was equivalent to one small plastic shopping bag?  Truly and awesome sign that more and more events can start to eliminate the amount of waste produced by an event, which will help keep our trails beautiful for the years to come! 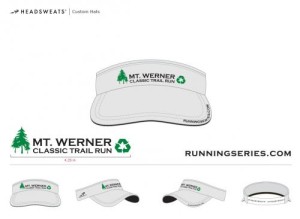 After the event, there was a large raffle, with up to 30 or so prizes from the Series’ sponsors: Montrail, Mountain Hardwear, Big Agnes, and Smartwool.  While Honey Stinger provided gels and energy cubes at the start line. Montrail had a tent with their line up of shoes at the race start and up top near the finish line; 2 lucky winners in the raffle got to select a brand new pair of Montrails!

Next year, I hope to add a few more races from this series to my summer race schedule.  The trail, people schwag, food, and concept were all worth the extra drive from Denver!