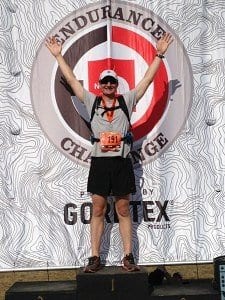 In it’s 8th year of operations, The North Face is putting on another great year of the for the Endurance Challenge.  This is a series that I have heard of over the years, but for one reason or another, I never made it a point to run one of the races.  This past year, I decided that I wanted to step up to a 50 miler from the typical marathon and 50k distances.  For me, this was a big step and I wasn’t sure how I would handle it.  After looking at time in relation to training, I found that The North Face Endurance Challenge Wisconsin was the race to run.  For me, it allowed enough time for me to get in sufficient training and the course seemed mild enough for me where there was a ton of vertical.  I live in Colorado and I am used to a lot of vertical because almost any run you do in the mountains, you have to go uphill at some point.  That said, vertical something that I am used to, but for my first 50 miler I wanted a course without a ton of vertical gain.

When I first signed up for The North Face Endurance Challenge, I thought to myself, ok here goes another company slapping it’s brand on a race and letting the race director do all the work.  It is true that it is incredibly important to have a good race director for a race, but the sponsorship support is a close second.  When a sponsor like TNF steps up to the plate for the Endurance Challenge, they do it right.  From race registration and packet pickup, to the end of the race, everything in the race in Wisconsin was spot on.  The packet pickup was super easy and well organized, not to mention you get some pretty cool schwag such as Smartwool socks, Clif Bar goodies, and a bunch of other stuff.  The morning of the race, it was a little chilly and the race was setup with warm drinks, heat lamps, and all the food that you want to eat. 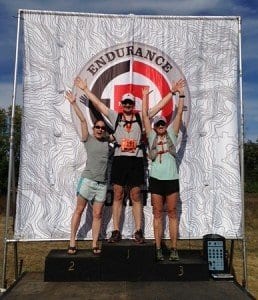 Thank you to my pacers!

During the race, the aid stations were very well organized, stocked, and the volunteers were super friendly and rocked!  The aid stations were spread out perfectly, so I was never at a point where I was dying of thirst or food.  I also kept enough food and drink in my pack just in case I needed more energy.  The course was very well marked which is incredibly important when running a trail race, or road race for that matter. At the end of the race, they had plenty of vendor booths to check out including a big TNF booth where you could buy some goodies. They also had plenty of ice baths which I am a big fan of after long runs, I highly recommend these if you haven’t tried them after your long runs. Overall, I had a very good experience at The North Face Endurance Challenge Wisconsin. 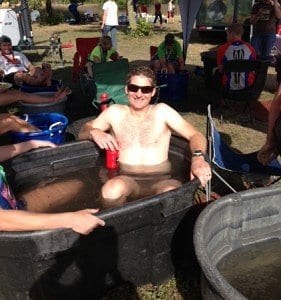 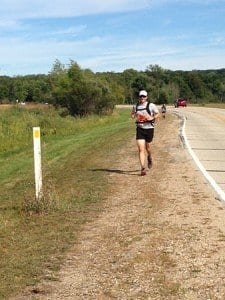 When choosing a 50 miler to run, whether it’s your first 50 miler or not, finding a good course for your goals is important.  The course for the TNF Endurance Challenge Wisconson is what I consider to be be mellow and rolling.  The majority of the course is mellow rolling single track. One of the downsides to this single track is that it is a mountain bike single track, so it can feel a little narrow at times for trail running. This should not be a deal breaker, but I think it is worth noting.  Between miles 30-40, there is a section on the course that has some steep uphills and steep downhills.  This goes on for about a mile or so and if you are feeling any fatigue setting in, these hills will eat you alive.  I ended up walking up these hills and going slower than normal on the downhills since they were pretty steep. 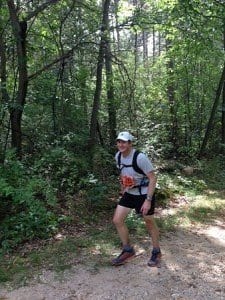 Walking up the steeps

There are definitely other hills on the course, but nothing that was too extreme in my opinion.  As for sun coverage, you are typically running under tree cover for most of the race which is nice to help in dehydration as well as getting sunburned.  Either way, I recommend wearing sunscreen or wearing a apparel that has SPF built into it.

For those worried about running on the road, I think I ran a total of 100 yards on pavement, so fear not you pavement haters. 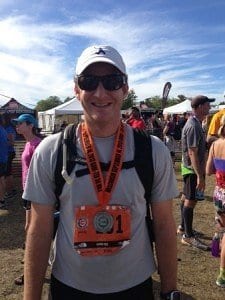 After the TNF Endurace Challenge Wisconsin – All Smiles

Overall, I thought The North Face Endurance Challenge Wisconsin course was a fun course to run and I would highly suggest this course to others.  If you end up flying in, fly into Milwaukee because that is a lot closer than Madison, generally cheaper too.

For racing, there a number of options outside of a 50 miler to run.  The North Face Endurance Challenge also offers distances including 5k, 10k, half marathon, marathon, and 50k.  The highlight of the race is the Gore-Tex 50 Miler, but I think that any of the race distances should be fun.  To sign up and learn more about The North Face Endurance Challenge series, please visit TheNorthFace.com/en_US/endurance-challenge