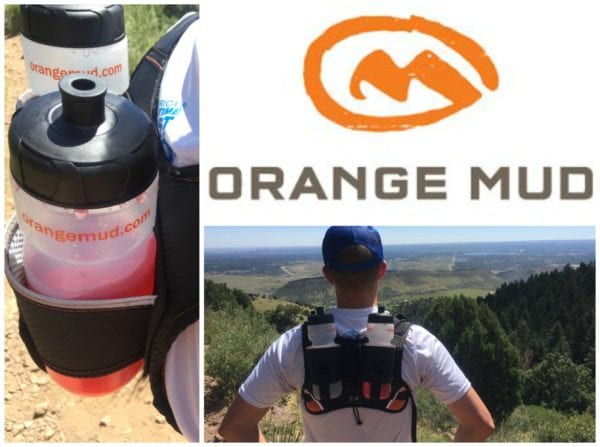 Lately here in Colorful Colorado, we’ve had some crazy weather – my last trail race just 3 days ago was in two feet of snow, and yet I found myself sitting outside Fika Coffee House in Parker, CO enjoying a spectacularly beautiful day. I was waiting (somewhat nervously, I might add) to meet the founder of Orange Mud, a company that’s lately been polarizing the running community. I’m not sure if I’ll ever be able to do these types of interviews with more than a small modicum of confidence, but I find learning about innovative companies who have a passion for making good gear intensely satisfying. All of my online research had pointed to the fact that Orange Mud was going to be one of these companies. I like to meet people because behind great companies are great people – people like all of us who simply had a dream and followed it through to completion. I’d had no contact with Josh prior to requesting this meeting, and was a bit surprised when he took me up on it. It’s not often that a company allows us this kind of access; typically you have to go through a PR agency, who may or may not even forward your request over. When Josh answered my email quickly and pleasantly, it set the stage for the type of company he likes to run – an authentic and genuine company that wants to make gear that just works right.

As you can probably tell from my lead in, I shouldn’t have worried about meeting up with Josh.  He’s quick to smile, quick to share his life story, loves coffee (ask him to tell you about his fancy coffee machine, and you’ll get a laugh – trust me), and loves to talk about gear. And not just gear – Josh loves to discuss ideas behind what makes gear great, and what makes you grab that same favorite pack/towel/piece of gear time and time again off the ‘ol gear pile. And trust me when I say this – Josh has PILES of gear. You name the activity, Josh has done it. He loves to race (practically any type of race – his stories ranged from crazy adventure races to triathlon to cycling and beyond), and this love of tackling any challenge is what set him on the path to making great products (we’ll be reviewing a few items from Orange Mud in the near future, I’ve actually had more than a few hours running in the HydraQuiver Vest Pack 2 – so yes, I can say they make great product). I had questions planned out for Josh after doing my own research on the company (Orange Mud does 70% of it’s business online) – but I quickly got sidetracked during our conversation ’cause Josh is just a real guy. It was refreshing to talk to a company founder who doesn’t want to regale you with sales numbers, a slide show, and increasing “market research” to show you why you should buy their ( and only their) product. Josh believes in his product because he creates it, he tests it, and he lives in it. And he’s excited to share that with other people – “I’m designing things to fix things that suck” he says, with that same smile on his face that I saw when shaking his hand.  The smile was to be a fixture of the interview, in fact – another indicator that Josh just loves what he does.

So, I asked him – why Orange Mud? Not just the namesake story which you can find on his website (we also all know by now the success of names like “Moosejaw”), but why the company in general? Josh is quick to say that he actually founded the company as a way to help his wife get out of the daily grind. “I wanted a company for her to run.” It was a simple enough statement, but to me it spoke volumes about his character – Josh is a family guy, and this is a big part of why he approaches the outdoor industry the way he does. Among his myriad of funny stories, I found this to resonate most strongly with me, as I frequently am in the quest for the perfect balance between training and family life – and more often than not get it wrong. Josh knows this balance, which is why he walked away from an exec level job at an extremely successful company to found Orange Mud. “The product just took off. It came to the point where I was working 100 hours a week.” Oh, and by the way – if you ever get the chance to meet Josh, just comes to terms right now with the fact that he’s probably smarter than you. Just because he’s passionate about gear and getting dirty on the trail doesn’t mean he doesn’t have great business insight, and he’s got a lot going on ‘between the ears’. I immediately understood that Josh didn’t get to exec level based purely on passion. How many of you, for instance, have a background in engineering and can talk intelligently about CAD? Didn’t think so – but if that’s what you want to talk about, Josh can do more than just walk you through it.

This helped several pieces of my puzzle about Orange Mud fall into place – namely, the seeming randomness of the product line, and the attention to detail that marks each and every product. How could any one company offer products of this variety with any degree of confidence in said product? The answer is simple and genius – they are all products that Josh uses day in and out. He puts hours and hours into each product design based on one mantra – “If my name is on it, it better work.” (His middle name, by the way, is the inspiration for the company name of Orange Mud.) His line up of products fits together because he simply entertains that one thought that we’ve all had – this [insert favorite product] could work so much better if I did “x” to it. Here’s the difference between us and him – Josh actually does the X. “Innovation from Frustration” is the motto he works under, and as our conversation unfolded it was clear that he has lots more ideas on tap, just waiting for some attention from him. He takes inspiration from anywhere, and even shared a slightly embarrassing story about how the Orange Mud Transition Wrap came to be. “I was changing in a parking lot after a long, muddy [mountain bike] ride,” he said, obviously thinking back to the day “and I turned around to see that I’d been totally busted standing there buck naked – I was pretty sure someone was going to call the cops.” This led to a rather quick design process in which he actually patented the Transition Wrap the night before The Running Event, which takes place in Austin TX every year. “It just took off immediately – I knew that it was winner at that first show.”


I could  regale you with more stories about Josh and Orange Mud’s product development (yes, he’s serious about using a gun holster, duct tape, and ratchet straps to make his first prototype), but you’re probably looking forward to just why Orange Mud is polarizing people in the running community. One, he stands behind his product to the point where he tells each and every customer to go out and try it at least three times. Because he’s an internet based organization, he’ll gladly rectify any issue an athlete has, as long as said athlete has actually used the product. “People feel bad sometimes returning things – they’re like ‘I’ve sweated all over this’ – I don’t care, I want them to be as happy with the product as I am.” He tells them “my product wasn’t designed to worn in your living room – go out and get it dirty. Once you’ve used the product, tell me what’s wrong and I’ll try to make it better.” He points to this as a foundation of his company. “It’s actually sad that people are so happy that I just reached out to them when they had an issue. To me, that’s just [customer service] 101.” This is a key factor in spending money on Orange Mud above competitors in the industry – have an issue, and often times it’s Josh himself who will reach out to you. Second, Josh is an innovator. Don’t expect his hydration solutions, wraps, and bags to fit the common mold for these products. Take, for instance, the distribution of weight on his hydration packs – they are designed to carry weight on a portion of your body that’s highly stable while moving, unlike the lower lumbar or hand. The bottle strategy is designed to allow you to carry different types of fluid, and refill quickly while on the move. As with any innovator, there will be detractors – but on this one, pay them no mind. Take a look around at your next race, whether it’s a marathon, triathlon, trail race – etc. You’ll see Orange Mud is now being repped by people galore. More and more people have tuned into the Orange Mud wave; in fact, at races across the nation Orange Mud represents in the top three of all hydration packs/solutions. Not bad for a guy who started with ratchet straps and a gun holster in his garage, eh?

Let me just sum it up for you by saying this – if it’s important to you at all where you spend your money, Orange Mud is a great choice. The products are innovative, useful, and designed to last the long haul. The company is founded by good people who are passionate not only about the gear designed, but about the fact that their consumers like the product. They receive constant feedback from a group of users (on a closed Facebook group) who are just like you and me – I’m not a pro, and I’m not first to the finish. Josh isn’t interested in pros – he’s interested in you and me. When he says he’s based his company on “consistency, quality, and ingenuity” he means it. And now that he’s relocated Orange Mud to Colorful Colorado, I’ll be taking him up on his offer to grab a beer some time – I’m sure he’s got more stories to tell. Cheers.