Patagonia Provisions yesterday announced the release of Unbroken Ground – a 25-minute film that explores the critical role food plays in finding solutions to the environmental crisis. The vast majority of our food is produced using methods that reduce biodiversity, decimate soil and contribute to climate change. Patagonia Provisions believes that food can and should be grown, harvested and produced in ways that restore the land, water, wildlife and human health. Directed by Chris Malloy of Farm League, Unbroken Ground tells the story of four pioneering groups – and the people behind them – leading the way with regenerative agriculture, restorative grazing, new crop development and selective-harvest fishing.

The film starts with Wes Jackson, founder of The Land Institute, who through the development of perennial-grain crops is working on a new type of agriculture that will save soil from being lost or poisoned. In the words of Yvon Chouinard, “Wes is doing the most important thing in agriculture in the last 10,000 years.”

Moving to the Great Plains of South Dakota, Dan & Jill O’Brien of Cheyenne River Ranch are working at the forefront of restorative grazing. Having witnessed the environmental degradation that comes with cattle ranching for so many years, the O’Briens decided to bring the free-roaming buffalo back to their native homeland, offering an alternative to the industrialized food system while also preserving the Great Plains.

In Washington State’s fertile Skagit Valley, Stephen Jones, director of The Bread Lab, is focused on diversified crop development. Jones is developing diversity in locally grown organic grains to determine which perform well for farmers and which are most suitable for craft baking, malting, brewing and distilling. Jones’ work was profiled in a highly-acclaimed New York Times Magazine piece in 2015.

Lastly, selective-harvest salmon fishing is highlighted through the work being done by Ian Kirouac, Keith Carpenter and Riley Starks of Lummi Island Wild. Through a process called reef-netting, fishermen are able to harvest the targeted fish species while allowing non-targeted species to be released unharmed. This technique has been used for thousands of years by the First Nations people of Lummi Island. Lummi Island Wild Cooperative’s mission is to promote the respectful and responsible harvesting of wild salmon and to protect the environment for future generations of fish and people. 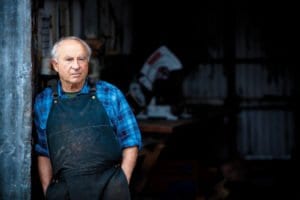 “Revolutions start from the bottom. They never start from the top,” notes Patagonia founder Yvon Chouinard in the film. “At the bottom are these people who are willing to break the paradigm. Putting a small group together, all believing in the same thing, all going in the same direction… you can’t believe what we could accomplish with that.”

“We believe in the work and passion the people in Unbroken Ground bring to changing how food is produced,” said Birgit Cameron, director of Patagonia Provisions. “As our business grows, we’re committed to developing partnerships with like minded farmers, ranchers, fishermen, scientists and chefs to create delicious food that’s good for both people and planet.”