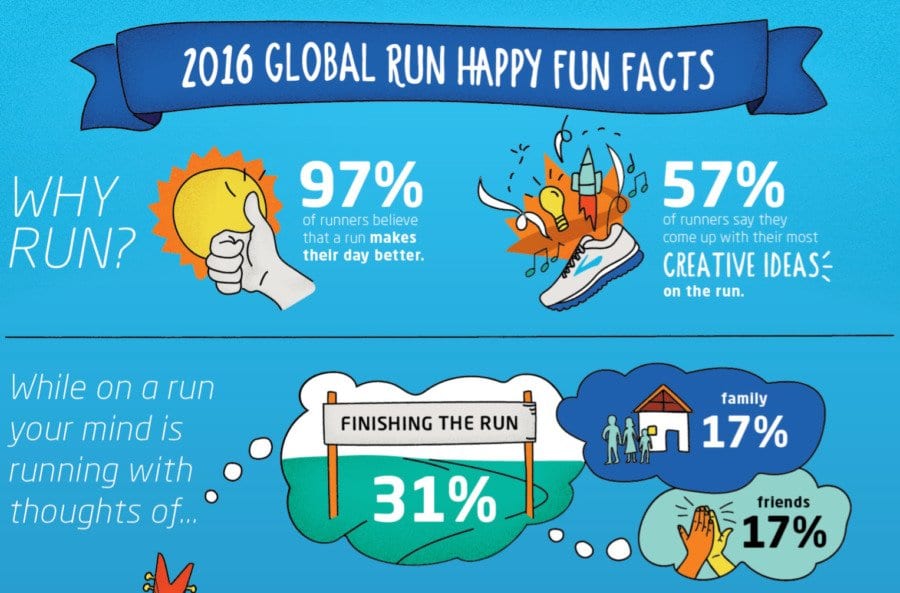 Searching for a breakthrough idea? Looking to add pep to your step? Head out for a run. According to the fourth annual Brooks Global Run Happy Report, running rejuvenates your creative juices and improves your mood. In celebration of Global Running Day, Brooks is sharing eye-opening revelations about runners—from their source of inspiration to how they take advantage of post-run endorphins.

The survey results clearly reveal that the power of running is fierce and goes far beyond the time you start and stop your watch. For nearly all runners (97%), running makes their day better. In addition to sculpted legs and a healthy heart, the miles offer a blank canvas for new, creative ideas. Fifty seven percent of runners reported they’re most likely to come up with their most creative ideas on the run versus in the shower (18%) or in the car (13%). But not all run-induced ideas are life altering. In fact, on-the-run thoughts range from accomplishing the run (31%) to sex (8%).

“Every year I look forward to the results of our Global Run Happy Report because they bring to life the transformational power of the run,” said Anne Cavassa, Chief Customer Experience Officer at Brooks Running. “I couldn’t agree more that the miles I spend on the running trails are where I do my best thinking. Whether it’s thoughts about work, friends or family, I always return refreshed and ready to tackle the day.”

Other juicy revelations about how bedroom workouts translate to the road, dream celebrity relay squads, sweaty selfies and much more were also uncovered:

STOP AND TAKE A SELFIE

If you didn’t share it did it really happen?

Marathons, mud runs, intervals and rest days can translate into the bedroom:

From sports bras to make-up, women have their own unique running language:

For more information about the survey including what tunes runners like to rock out to and how they run the world, visit Brook’s blog. Inspired to hit the ground running? Visit https://www.brooksrunning.com/ for ways you can celebrate Global Running Day 2016.