Realistically the first month of my endeavor would’ve been far less painful had I anticipated the fact that ALL of my appendages were subject to extreme cold. I’d taken care to shield my feet, my hands, my head, my arms, my legs, and even my face. Why hadn’t I anticipated the evil cold gripping my most sensitive appendage in an excruciatingly painful judo grip of death? I suppose because I’d never had to run in negative temperatures before. Running every day, as I’d quickly found out on my run of the year, didn’t mean running only when the gym was open. On the first day of the New Year, Denver was a balmy 10 degrees, and I felt it to the *Ahem* core of my being. After a few blocks, though, I found it to be a fairly invigorating experience. Really, running outdoors in January was to become like any other running endeavor I’d undertaken – you just had to get out the door and take the first steps. Yes, people think you’re crazy. Yes, it’s tough to run on ice packed, snow crusted, steeply pitched sidewalks. But it’s actually tougher to get off your butt and out the door when it’s -4.

True, to run outside in this kind of weather requires the right gear. Just as I wouldn’t attempt to ride backcountry at Loveland pass on a snowboard from Wal-Mart (although I’m sure someone has done it), I didn’t hit the road outdoors without making sure I had tights, a warm baselayer, thick socks, and the assortment of odds and ends listed above. After some thinking (and brainstorming with a few vets of cold weather running) a nice, soft sock – strategically placed, of course – solved my embarrassing predicament. Sorry, Brooks, I won’t be dropping $40 on your thermo-underwear, not when a tube sock will do the trick. All in all, I became quite comfortable running outside during the colder temperatures, and even learned to like it – except when it hits the negative side of the equation. Then it just hurts.

I didn’t sign on for this gig, however, to be comfortable all the time. And believe me, when reviewing my the first couple of weeks in the running journal, the words “twinge” and “pain” leapt out at me like a slap in the face. My first week of running every day was replete with thoughts of quitting, second guesses, and stumbles. My stress fracture started hurting, my right knee twinged, and forget about barefoot running –  my December of rest had left me off balance and rusty. Running is just like riding a bike, though… it comes back. In my first week, I hurt almost all the time, but it was well worth it. Throughout the first week, I came as close to quitting this whole thing as I hope I ever come.

Only to end up at 40 degrees. I love Colorado.

And I’m not quitting, by the way, even though I can see now that quite a few people think it may be inevitable. The most frequent question I get is as follows: why the hell would you want to do that? When I cheerfully reply that perhaps it’s because I haven’t done it yet, I usually receive a sarcastic response about a “magic pill” or some other motivational technique. Here in lies my greatest secret – I actually travel once a year to the Amazon basin to seek out an ancient tribe of human beings. They have a recipe for a mystical powder made from snake anus and warthog tongue. True, you do have to snort it off the back of a pissed off puma while letting fire ants bite the inside of your left nostril, but at the end you achieve total enlightenment – this is only a side effect. It’s actual goal is to make you run every day.  I usually fly down there, and then run back. It’s amazing.

There is no magic pill. Like anything else in life, it’s hard work. The real secret is in the running itself. Exercise vets all know the trick, and so do Olympic athletes. You get hooked. I’m not saying I’ll ever have the athletic prowess of a world-class athlete, but I am capable of feeling that rush of adrenaline that only comes from a personal record in the 5k, or the completion of a new, uncharted distance. The motivation to continue comes from the fact that you just feel better. When I’m training for a race or attempting something like running every day of the year, I sleep better. I handle stress better. I eat better, drink better, and even hold court on the porcelain throne better. For those looking for a magic pill, look no further. Just get out there and pound some pavement.

What I hadn’t anticipated was the backlash from those closest to me. To undertake something like this, running has to become a priority. The first week or so, it’s not really a big deal, because you’ve planned to do it. But soon enough you run into those days (and we all have them) where it seems as if you don’t even have time to breathe, much less go running. And what about snowboarding, or those after work beers with the guys, or Riley’s (my absolutely adorable 10 month old son – as I write this, he’s happily tearing up this weeks junk mail and throwing it around the living room) bath time? I’d love to tell you that I planned perfectly for every day, and that I ALWAYS ran at my perfect time, and then my day went just peachy. Well guess what – life isn’t perfect, and some days you just have to be flexible.

While this endeavor is important, I definitely had to learn that I couldn’t do it without the support of those closest to me. My wife (whom I’ve known for over a decade, and has always been my number 1 fan) was the first to turn. An avid runner herself, she quickly felt cheated out of running time, and was left wondering why my running goals were more important than hers. The hard answer here is that they absolutely aren’t. In order to undertake this, I had to not only clear time in my schedule for me, I had to make time to be with Riley so she could run. In theory, this is simple. In practice, it wasn’t – or isn’t, I should say. We’ve now managed to work out a fairly comfortable routine, but it wasn’t easy. Life is definitely all about balance, and no clearer is that demonstrated when you tell your wife that you can’t help change that nasty diaper because you need to get a quick run in. 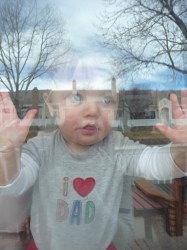 Somewhat ironically, though, the constant running day in and day out makes you all the more appreciative of life’s little moments that have nothing to do with running. When I’m out there, whether it’s on the road, on the trail, or even on the treadmill, I can’t help but think of home. Running is a great way to clear your head, work some stress out, and get away from yourself for awhile; it’s also a great way to put things back in perspective – really bring to the forefront what’s most important in life. I’ll have further installments focusing on training techniques, my adventures as a gym rat, and the importance of recovery days. I’ve now run a variety of paces, a variety of ways (I love trail running in barefoot shoes – but unfortunately it’s only been warm enough for three outings) and a variety of distances. I haven’t missed a day yet. But right now I’ve already done my run today, and Riley’s hungry. I sure do love watching him eat spaghetti, so my adventures with naked sauna dude will have to wait till next month. See you out on the road.