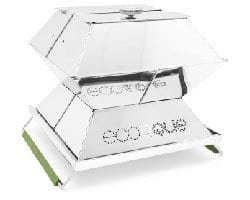 Now that it’s getting into grilling season, I thought I’d check out what was new in the grilling world.  The Eco-Que portable grill is a compact grill, but don’t let the size fool you.  While the Eco Que portable grill can fold down and fit in a brief-case, it still has plenty of oomph to cook anything you need to throw on the grill. 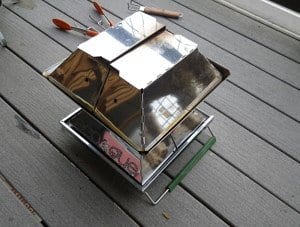 The setup of the Eco-Que portable grill was a little different from the normal grill setup that we come to expect.  For starters, there was no square or circular molded formations that you just have to attach legs and a top to.  All of the components of this grill fold into a flat formation, so it is easy to store.  It was not all that challenging to setup, but it was different and could take a little getting used to for some.  I personally like my little Webber grill where I can pick up the lid, throw my meat and veggies on the grill and put the top on.  With the Eco-Que portable grill, there is a little more setup involved. 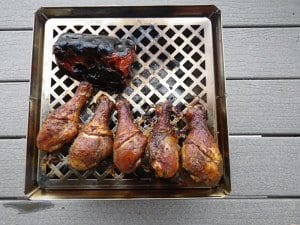 For cooking, I was able to cook with some oak charcoals that lasted a long time with little reinforcement.  I found that it was pretty easy to regulate the heat based on amount of charcoal used.  I used the Eco-Que portable grill to smoke some chicken wings and grill up some vegetables and it worked just fine.  As to the efficiency claims, I was not able to tell the difference between my small Weber charcoal grill and the Eco-Que Portable grill.

One of the downsides that I found from the Eco-Que portable grill was the sharp edges of the grill grate. The cuts to make the grill were not rounded off which makes handling the grilling grate very difficult. While washing off the grate in the kitchen sink, I ended up cutting my hand(and I was trying to be careful not to cut myself!).  This is definitely something I would suggest changing for future models.  Another thing that makes me question this grill is the up to 75% more fuel efficient claim.  That’s a big number, but when you stick the word “up to”, I become very skeptical.  I personally think this gets into the category of green washing, which I am not a big fan of.  Just give me what I would get with a typical bag of charcoal. The last gripe of this grill is the price.  For the 12″ grill, the MSRP is $129.99.  For a similar sized grill with a reputable name as Weber or others, you can get a grill for about $30-$50 dollars.

Overall, I would pass on the Eco-Que portable grill as I find the price is too high, it is difficult to wash and handle due to the sharp edges, and the efficiency is too hard to measure to be able to trust the claimed up to 75%.