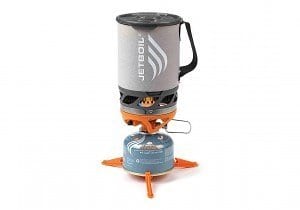 I’ve been a big proponent of the Jetboil butane canister hiking stove system since it’s inception. It’s fuel stingy yet drag racing quick heating is still dazzling after many years of trouble free use., and I’ve used in on multiple trips from the 8,000 ft. + snow covered Marble Mountains to the drenched in fog Lost Coast. from the 8,000 ft.. snow draped The original Jetboil promised, and still is,a wonder of a stove. But the new Titanium Jetboil is significantly slimming down to try and appeal to the growing group of ultra light/fastpack hikers. 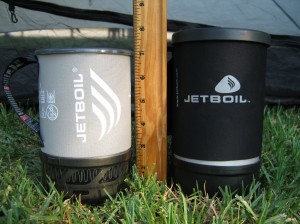 When I got he new Jetboil Titantium I noted several design improvements with significant weight savings There is a new pot supporter which allows you to cook with other cooking containers like pots and pans that are up to 9 inches in diameter and 6 ½ pounds in weight. The new Jetboil also includes a tripod stabilizer which makes it more solid and easier to find a stable cooking surface. It’s similar to the old Jetboil in that it uses the Jetboil proprietary fuel canister and has the same instant start system that is so convenient and it functions identically to the original as far as fuel usage and heat production but is significantly lighter and although more compact hold the same volume of recommended liquids (2 cups.) for heating. At sea level it boils those 2 cups of water in two minutes.

The only minor gripe I have with the new system and what I’d salvage from the old Jetboil is the sturdy handle. I doubt the minor shavings of weight there is worth the trade-off of the steady and secure feel that the old handle gives.. 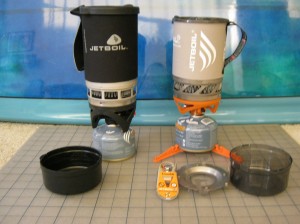 Not specific to the new Titanium Jetboil is the new Crunch It, a Butane Cannister Recycling tool , that allows you to safely recycle your butane canisters in your home recycling program saving you a trip to the hazardous chemical disposal site.

There are a plethora of stove options some both lighter and far less expensive than the new Jetboil Titanium, but with some offset in functional flaws such as notably longer cooking time and not as stable or as wind resistant. And though I shade toward the ultra-light/fast packing end of the spectrum, not to sound too sacrilegious, but weight isn’t the only consideration in choosing hiking equipment, convenience and reliability have their place and it’s hard to beat Jetboil when those factors are thrown into the mix.
A more pertinent question might be whether the titanium version is worth twice the price for the 3.5 oz of weight savings over their Zip system. That’s a calculation of value only each individual (maybe combined with their significant other or other hiking companions) can decide. But there’s no doubt that the new Jetboil is more versatile and sturdy yet lighter and smaller than the ground breaking original.

When it comes down to it, on trips where I’m likely to carry a stove, Jetboil has never let me down and the new Titanium version, with the same functionality and almost half the weight of the original, is a new welcomed svelte yet muscular companion

Zip cooking system (closest to the old in the Jetboil line up).