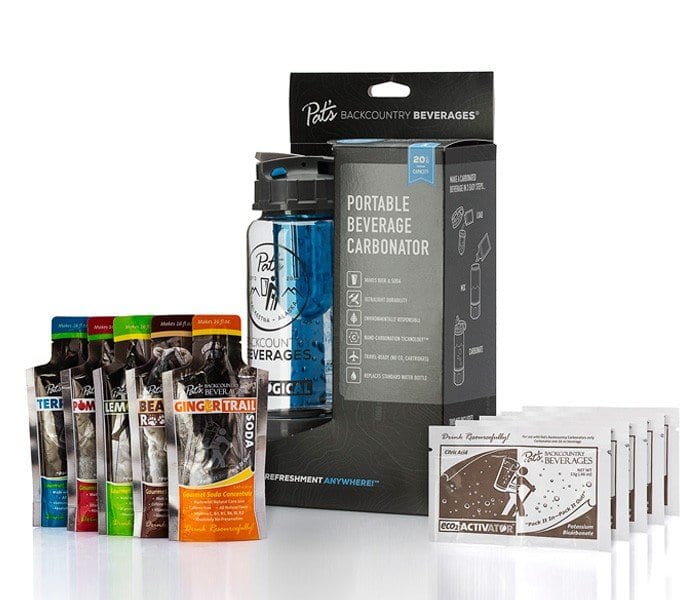 For the beer and beverage connoisseur who wants to have a beverage no matter where they go, Pat’s Backcountry Beverage has the answer.  After telling my friends that I was testing out a beer you can make in the backcountry, they all told me I would crazy and it wasn’t possible.  Well, they were right on half of it, but it is true that you can make you’re beer in under 10 minutes in the backcountry and drink it too. 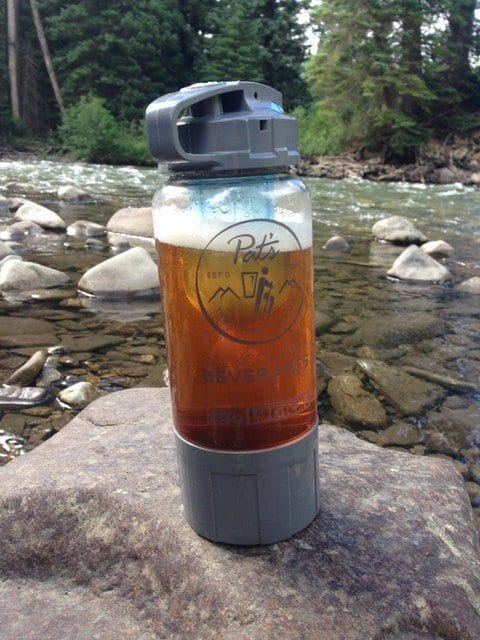 If you have ever been on a backpacking or hut trip and carried a 6 or 12 pack of beer with you, you understand those drinks can get heavy over the long haul.  The kind people at Pat’s Backcountry Beverage recently came up with a solution to having to lug heavy bottles or cans of beer in your pack and instead came up with a solution that weighs about a pound.  The general concept is that you find a cold water source such as a mountain stream and run that water through a filter into their carbonator bottle. Next, you mix in a few ingredients, do a little shaking, and BAM, you have cold beer and soda!  Yes, there are more details than that when getting the drinks right which is why I ask you to watch the video provided here. 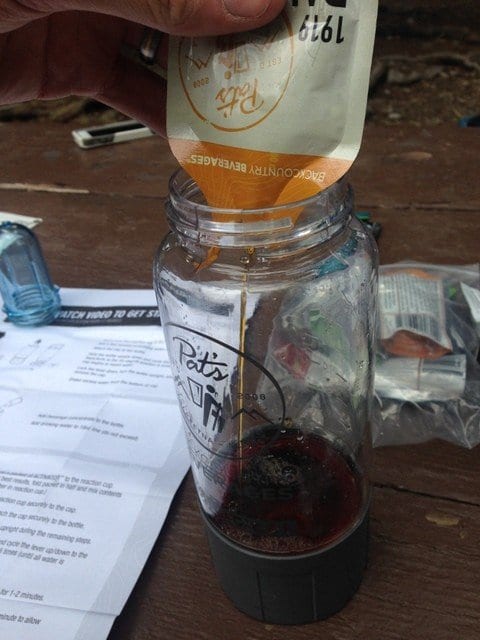 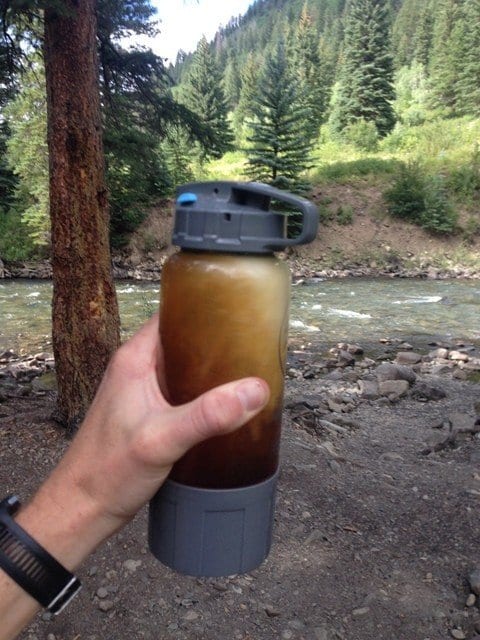 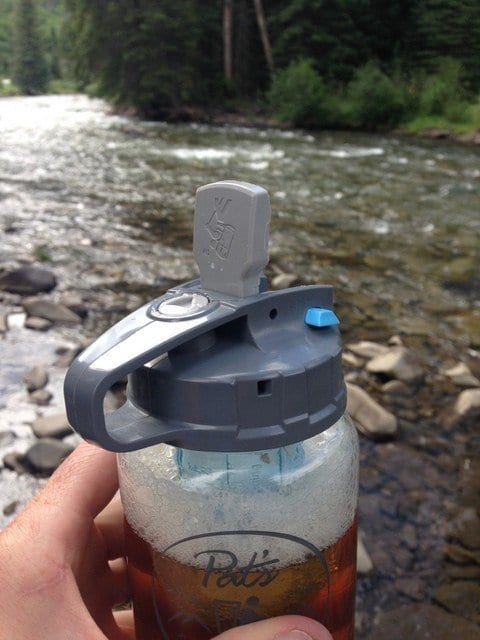 If you’ve made your own beer before, you understand how important it is to follow steps exactly as outlined in the instructions and that even the smallest mis-step can throw off the batch.  If you’ve never made your own beer, I highly recommend you giving it a try.  It has taken me a few tries to get the process right with making Pat’s Backcountry Beverage to work for me.   The videos above should give you some good insight into how to go about perfecting the process.  I have to admit, I followed the paper instructions that came with the kit and my beer didn’t exactly turn out perfect.  The good thing is that you can do your trials at home before you head out to the backcountry. 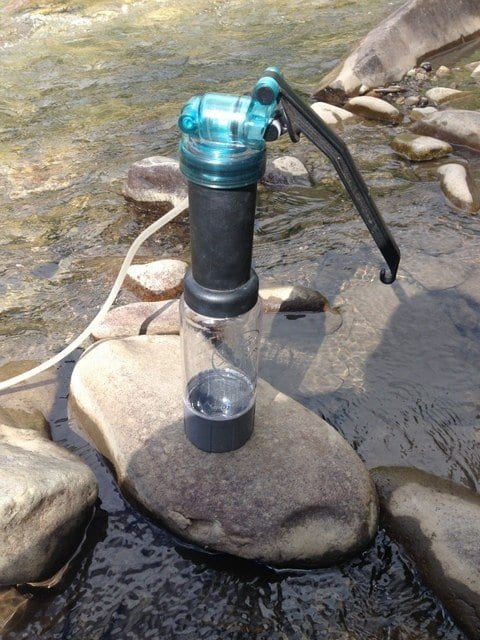 If you’re like me, you enjoy a COLD beverage whether it be a soda or beer.  The one thing that is important to consider is that the temperature of water you use will be the same temperature of the beer or soda you will be drinking.  If you live in a warm climate and are making your beverage in the summer, keep in mind your drink may be a little warmer than preferred.  Living in Colorado, just like the Coors commercials say, I get to Tap into the Rockies and my water is almost always icy cold.  If you are fortunate to live or camp near the high mountains where the water source is coming from snow melt, the water will generally be cold.  It won’t be the same temperature of the tap of your local brewery, but it is cold enough to drink and it won’t be like you’re in Europe drinking beer where beer temperature is not as important.

I love Bubbles and Fiz, do you? 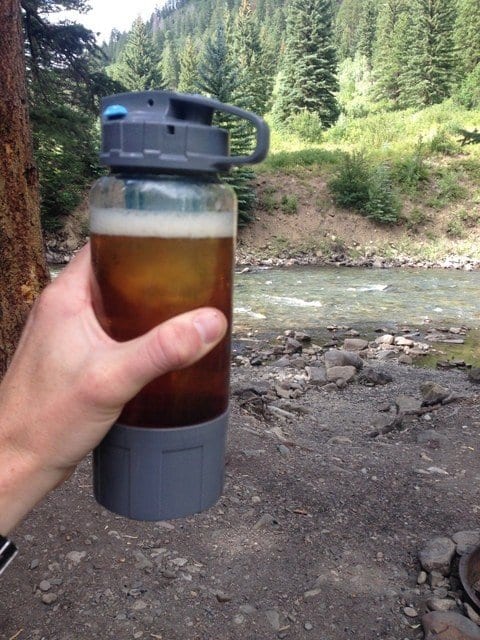 One of the challenges I have come across when making my beer and soda is that Pat’s Backcountry Beverages don’t have the bubbles or fiz that your regular can or bottle of beer.   One thing that I have found is that you really have to make sure you don’t get any water when in the activator solution.  If you get water in the activor solution before before you start shaking, the fiz will go into the air and not your beverage.  I learned the hard way and I can see from time to time that this may happen in the future.  That said, when purchasing from Pat’s Backcountry Beverage, I would buy some extra activator packets. 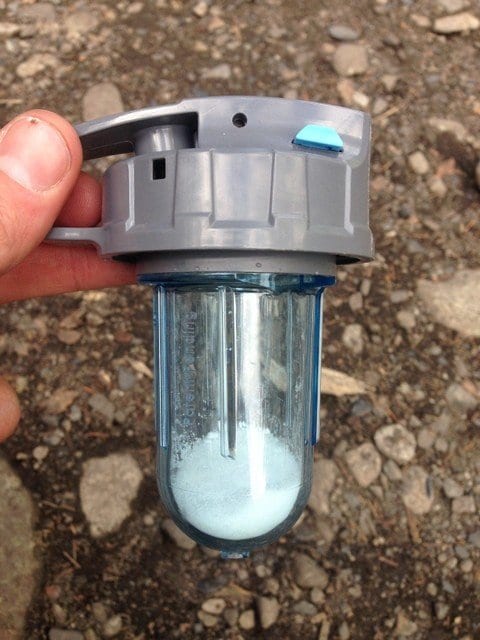 How Does Pat’s Backcountry Beverage Beer and Soda Taste??

I haven’t really mentioned this, but I like beer.  I have moved into the beer snob category in the last few years where I turn my nose up to the cheep and light beers such as Bud Light.  For beer these days, I like pale ales, blondes, wheat beers, and a few others.  Yes, these are not super fancy beers, but they are a step up from the typical light beers.  I still haven’t made my way up to liking the dark beers all that much.  I know you don’t really care what I like to drink, but I think it is good to give you a reference because individual taste vary so much.  So, the beer I tested was the Rail Ale and as far as flavor goes, I found that it is comparable to other Pale Ale micro-brews which is pretty tasty.  Keep in mind, it is very important to get the exact amount of water in the bottle.  Too much water and you guessed it, your beer taste watered down… The Soda is good and is similar to other soda’s on the grocery store shelves, but if I had to choose between a Coke and the cola mixture and I was at home, I would go with a Coke.  One of the reason’s I love beer and soda is the bubbles and fiz and I feel that they add to the flavor in a drink.  In the future, I hope to perfect getting the max amount of fix out of every beer or soda making.

If you find yourself heading out to remote lands or just far from your local beer shop, Pat’s Backcountry Beverage is an excellent choice.  It won’t replace home brewing or buying one of your favorite six packs, but for what this was made for, it provides a great solution to wanting a beer when you’re out in the wilderness.  While I haven’t tried this yet, but if you are traveling to places where they don’t have beer or soda, Pat’s Backcountry Beverage is allowed on planes and carry-on luggage. Each packet is less than the TSA Rule of 3.4 oz.  For more information, please visit PatsBCB.com