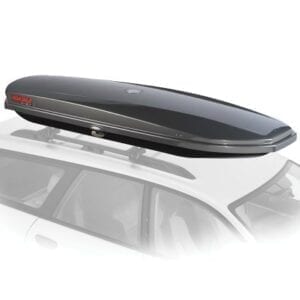 Recently, we have been testing out the Yakima SkyBox LoPro Titanium on various skiing, camping, and road trips.  Since we usually have a lot of gear, dogs, and people crammed into our vehicles, we found this cargo box to be super handy. The SkyBox LoPro comes with a low profile sleek design to reduce wind noise and drag so you can listen to your favorite radio station and save on gas.  On the topic of gas cost, we found that by loading up the SkyBox LoPro Titanium, we were able to fit an extra two people in the vehicle, which is nice when trying to save on gas and help the environment. The top of the LoPro opens from both sides of the vehicle and is very sturdy which makes it easy to open and close. The LoPro is easy to install and remove;  it took all of about 5-10 minutes to install it on our SUV and remove it when we didn’t need the extra storage space. Here at ActiveGearReview.com, we are always on the road testing out gear and we tend to leave the SkyBox LoPro Titanium on the roof to store gear that we use every week.

One of the features we liked most about this cargo box, is that it comes with a solar powered LED lighting system that lights up the inside of the box when it’s dark out. This proved to be useful on the many occasions, especially when we arrived late to the camp spot and had to rummage inside the box to find pieces of gear. Aside from camping, the LoPro is great for storing skis and snowboards as it protects them from salt and rocks which can damage your equipment over time.

The Yakima SkyBox LoPro Titanium has a total of 15 cubic feet storage capacity and the box is made with 50% recycled material.  Aside from this particular box being green, we also want to commend Yakima for being extremely active in helping reduce waste and saving our planet. If we had three thumbs, we would give this box all three!  But for now, the Yakima SkyBox LoPro Titanium gets two big thumbs up and is a receives KEEPER status! For more information, please visit Yakima.com