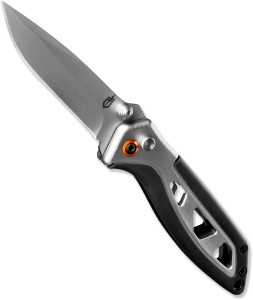 Beginning back in the 30’s, Gerber began as a small company who produced fine knives as holiday gifts. Almost an entire century later, Gerber is still around making the quality product that made them legendary in the first place. From multi-tools to hatchets, if it has a blade, there’s a chance that Gerber has made one. It’s only fitting that the latest offering from Gerber draws back to it’s roots – and yes, the outrigger is a lot more than your standard “holiday” gift. 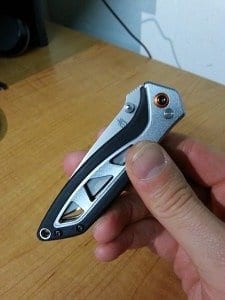 The outrigger is essentially a pocketknife or folding knife. For those unfamiliar with the term, a pocketknife will typically have a clip, be large enough to be actually useful (think bigger than a key chain knife) and yet smaller than a belt knife. Rather than use this term (or go old school and call it a jack-knife), Gerber chooses to refer to it by dubbing it a clip knife – although, it’s not quite clear whether they mean clip style (meaning it has a clip on it) or clip point (referring to the clip point blade). Either way, it has both of those characteristics, and an open framed design. Other features include a rubberized handle, Assisted Opening 2.0 (a spring loaded opening mechanism), and a 7cr17 stainless steel blade. 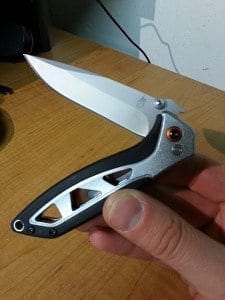 Partially open to show the studded thumb grip on the back of the blade.

The Outrigger comes in three different sizes – the outrigger (which we tested), the outrigger mini, and the XL. The outrigger looks a bit larger that it actually is; in reality, some of the three inch blade is taken up by the mounting point, and the handle itself is just shy of fitting fully into an average sized hand. Those with larger hands may wish to order the XL. Although I like the rubberized grip, I felt that just a bit more length would’ve come in handy, especially when using the knife to cut through tougher materials like leather or brush. 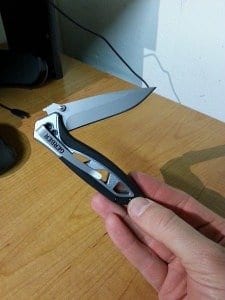 Backside with the pocket clip.

The blade itself is exactly what you’d expect from Gerber. Sharp, durable, and able to tackle just about anything that life throws your way. I’ve had several Gerber knives in the past, and none of them disappointed me. Knife culture is an odd thing, so purists won’t be happy with the offering, but for your average camper/hiker/outdoorsman, this knife will exceed your expectations. I carried it with me daily for two weeks, and I had the need in my normal line of work to cut through the following materials: seat belts, cardboard, duct tape, vehicle airbags, leather, and just for fun a few branches and sticks. It performed excellently with all materials.

The opening mechanism does take a bit of getting used to. Whether or not you like this is sheer personal preference – some camping enthusiasts love an assisted knife (for ease when opening one-handed) and others don’t seem to prefer it. This mechanism is a bit stiffer than your average spring assisted opening knife, and has a bit of a trick to it. If pushed in a direction parallel to the knife (perpendicular to the opening direction), it shoots open with a satisfying “click” at the lock point. If pushed perpendicular to the knife (parallel the opening direction) it doesn’t budge. Once I got used to it, I was a fan – at first, I didn’t like it at all, as all it gave me was a sore thumb. 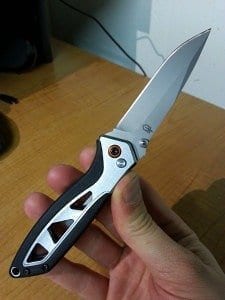 Fully opened, and securely locked. There’s no budging from this lock mechanism.

In conclusion, the outrigger is just what you should know and love about Gerber – solidly built, dependable, and just what you need to carry in your pocket. It’s just now available as of the date of this review, so you don’t even have to wait to get your hands on one. Read about the history of Gerber in the meantime at www.gerbergear.com.