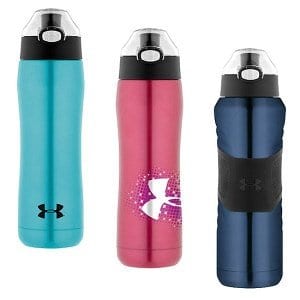 As consumers and athletes are bombarded by hundreds of water bottle manufactures, it can be a little tricky to find out which one is right for you and which one is worth buying.  When Under Armour and Thermos first reached out to me about a new water bottle, I thought to myself, here we go again… Typically, I don’t always test out all the water bottles as we get so many requests.  With Under Amour putting its name on the bottle and charging $12.99-$29.99 for a water bottle, I thought I would take a look and see how it performs.

For starters, the Under Armour-Thermos water bottle is fairly big.  It holds 24 oz. and since it is a double walled water bottle, it adds a little bulk for insulation.  While testing this bottle, I wanted to see if it would keep my drinks cold over an extended period of time.  After using the bottle in 90 degree temperatures, I found the bottle to perform well over extended periods of time.  For warm summer temperatures, I really like to have my liquids cold for both around town and for sports.  The part that I liked best about the bottle is the cap.  This bottle is truly a one handed bottle that is easy to open and close with one hand. This isn’t always a big deal, but while driving in traffic, having a bottle that you can use with one hand is nice. Another feature that often gets overlooked, but is super important is whether the bottle leaks or not.  Over the month and a half of testing, I am happy to report back that I found NO leaking.

In the end, I thought this bottle was a little bulky, but it did a great job at keeping my water and liquids cold and is super easy to drink out of.  These water bottles can be purchased at Sports Authority, Dicks, Thermos.com, and UnderArmour.com.