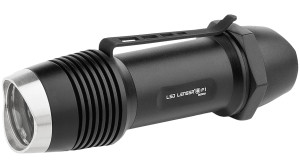 I hate to admit this, but I didn’t know the name LED LENSER (pronounced “led” lenser, not “L-E-D” lenser) before testing this product; now that I do know the name, I think everyone should. I have a passion for gadgets and tools that not only work well, but are rugged enough to take a beating no matter what activity I’m doing. Not only does the F1 have both of these attributes, it also looks cool. Bonus.

Perhaps I should tell you a little bit about LED LENSER. They make use of German engineering to create some of the finest flashlights in the world, and have been doing so since 1994. They quickly became a world leader in flashlight manufacturing, largely due to their ability to focus light effectively. This sounds simple in theory, but in practice, it’s extremely difficult due to the properties of light itself. Simply put? LED LENSER flashlights may have the same lumen rating as other flashlights on the market (the F1 puts out 400 lumens, and it’s only slightly bigger than my thumb), but they actually look brighter than the competition – which is a great way to sell a lot of flashlights. 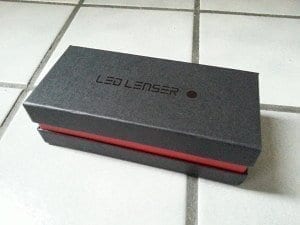 Speaking of selling flashlights, the packaging for the F1 is slick.

In 2011, they were acquired by Leatherman Tool Group, Inc. Check out the press release on it here: (https://www.leatherman.com/home). Essentially, the tool group is now the parent company to both LED LENSER and Leatherman – each maintain their own separate website. This acquisition allowed LED LENSER to reach much deeper into the US market – their flashlights can be purchased on a variety of outdoor retailer sites. You have to move quick, though – a scroll through the message boards on the LED LENSER site reveals that these flashlights tend to move quick, so buy first and ask questions later.

I don’t put such an obvious stamp of approval on all products I review, but with the F1, it was hard to find any flaws. My testing consisted of roughly three weeks of carrying the flashlight with me each and every day. Not only did I use the flashlight daily to illuminate engine compartments (topside and underside) in all conditions (indoors, outdoors, garaged, low light, high light), but also on a fly fishing excursion, a couple of hikes, and in rain, snow/sleet, and dry conditions. That’s what is really great about the size of the F1 – it packs a powerful light capacity into such a small object that it’s easy to take it with you everywhere you go. 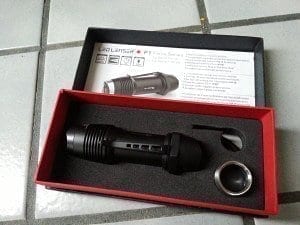 As you can see, the flashlight itself is small enough to slip comfortable into your front pants pocket.

Despite the small size, the F1 packs a number of really useful features as well. To begin with, I found out (by accident) that the light is waterproof. On the above-mentioned fly fishing expedition, I accidentally dropped it in about 10 inches of stream water, while lit. It was only in the stream for a few seconds (it’s really easy to find a lit flashlight at dusk in a low running stream), but it suffered no ill side effects, and continued working well. Supposedly, it’s waterproof down to 2.5m – sorry LED LENSER, the streams are just too cold for swimming this time of year, so my (accidental) water test will just have to do. I’d say it’s a safe bet that they are on the money, though. A couple of other neat features are the three light functions (full light, 15% light, and strobe), temp controlled protection against overheating, and AFS optic technology. For a run down on the three features, check out a quick video review I did here – https://www.youtube.com/watch?v=vxxdNSvbWSw.

As mentioned above, the AFS optics are what really sells LED LENSER. It has to do with the shape of the lens the light goes through; I don’t have any other 400 lumen flashlights just laying around, but the light coming from the F1 is notable whiter and more brilliant than just about any other flashlight I’ve seen. The multi-function lights are also a great touch – I like having a dimmer light setting to both preserve the battery, and also for being able to read maps/materials at night (400 lumens is way, way too much for anything up close). As for the overheating, I was never able to reproduce the overheating alarm (the light will automatically adjust to a dimmer setting if it reaches a certain temperature) even though I’ve used the light for up to 20 minutes at a time – it grew hot in my hand, but not uncomfortably so. 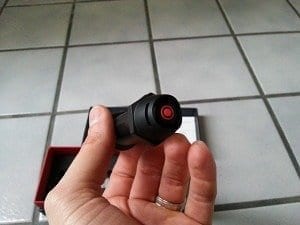 The on/off switch is rubberized in order to allow for a sure grip in all conditions.

While there are no color variations for this flashlight, they do include a black and chrome bezel, as well as a detachable clip (which I’ve left on, since it’s really handy for putting on your pocket), and a lanyard. Retail on the light is $80.00, but it appears that several websites (which you can access directly from their website – they have no direct sales that I could find) have the F1 for slightly less. Check out the press release I mentioned above, and the head over to www.ledlenser.com to check out the wide variety of flashlights they have available.