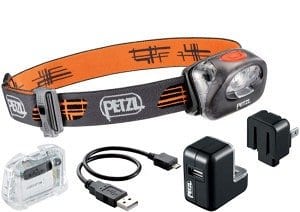 As many companies look to reduce the carbon footprint of their products, rechargeable batteries are making their way into more and more outdoor technologies.  The Petzl Tikka XP2 CORE headlamp takes an already great headlamp and adds Petzl’s CORE USB-rechargeable battery pack providing excellent battery life and eliminates the wasteful use of disposable alkaline batteries. 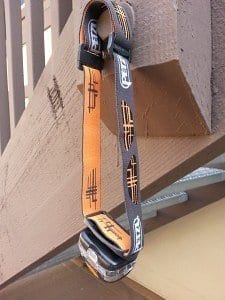 Headlamps are one of those products that you just want to work without fuss or hassle and the Petzl Tikka XP2 CORE hits the mark in this.  As a headlamp, the Tikka XP2 falls into the more basic category with 1 main light and a red, low intensity reading/cooking light.  A simple and straightforward headband keeps the light on your head in a stable and perfectly comfortable fashion.  Adjustment is easy with a typical sliding tensioner that has a little bit of contouring to it on the inside to keep it from digging in to your head.  A nice bonus feature comes in the form of an emergency whistle integrated into the sliding adjuster.  The headlamp slides smoothly on the band so that you can center the adjustment pieces so they are evenly distributed on the back of your head.  I also like how the Tikka XP2 CORE lamp doesn’t easily come off of the band like some headlamps. 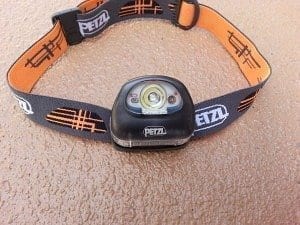 The Petzl Tikka XP2 CORE headlamp does present some trade-offs when compared to the version that uses standard AAA alkaline batteries.  In its standard (non-regulated default) mode, the rechargeable CORE battery gives the Tikka XP2 17 hours of usable life at maximum brightness and 85 hours in the reduced brightness setting.  By comparison, the Tikka XP2 (non-CORE version) will get 80 hours and 190 hours respectively.  While this may seem like a drastic difference, consider the fact that the average night is about 8 hours and you’d get 2+ full nights of use out of the Tikka XP2 CORE if used at maximum and there are very few situations I can imagine this being the case.  For the average camper/backpacker, you might use your headlamp 2-3 hours a day, giving you 5-8 days of use at maximum brightness.  When you factor in the amount of time you will be using the headlamp in lower brightness settings, the Tikka XP2 CORE should get you through almost any trip without needing a recharge.  Furthermore, because it can be recharged via USB, you can top it off using one of the many portable battery packs that are on the market these days. 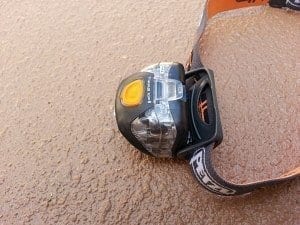 A large, easy to use single button is the only control you have to deal with. The lamp swivels downwards for directing the light in a more effective position for different activities.

Light output is obviously of paramount importance for and headlamp and the Petzl Tikka XP2 CORE performs admirably for its intended use.  The Tikka XP2 CORE sits at the top of Petzl’s ‘Versatile’ range, which is designed for the average headlamp user.  This means someone who is looking for a good light to use in situations such as cooking at the campsite, light, night time exploring, and walking a dog in the dark.  Petzl gives the Tikka XP2 CORE two white light modes and a red light mode to accomplish your tasks as well as a flashing white and flashing red mode for emergency signal use.  Additionally, a slide up diffuser allows you to broaden the width of the main light when appropriate.  Where the Tikka XP2 CORE distinguishes itself from the Tikka XP2 (non-CORE) is in the ability to customize the light output with the OS by Petzl software.  By default, the light output is set to work in a non regulated fashion like most standard headlamps and will decline in intensity as the battery drains.  In this mode, the light distance will decline from 55 meters to 16 meters by 10 hours of use.  Fire up the OS by Petzl software and connect your computer to the usb port of the Tikka XP2 CORE and you can change to the regulated light output mode.  What this gives you is 4 hours and 30 minutes of perfectly consistent 55 meter light distance without a decline.  This is great for times when you know the length of time that your activity is going to take and want to maintain stable light output. Obviously there is a substantial trade-off in battery life but it is a great feature to have available for the right scenario. 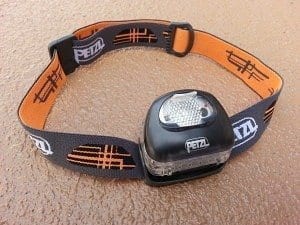 A slide up diffuser broadens the light pattern. 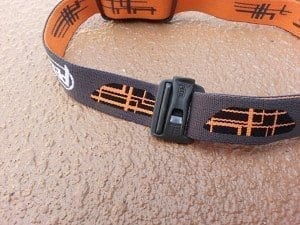 An emergency signal whistle is built into the sliding head band adjuster. 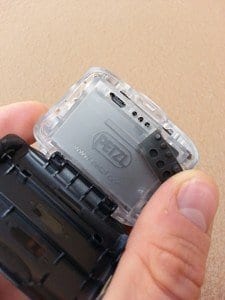 The USB charging and computer connection port is behind a waterproof cover.

The Petzl Tikka XP2 CORE is reliable, functional, versatile, and simple; all of these attributes make it a great headlamp option.  The light output and battery life suits the needs of most headlamp users very well.  The optional light regulation is a great feature and offers something that many lights can’t provide.  If maximum battery life is necessary, consider the Tikka XP2 (non-CORE) as a great alternative with the same form factor.  The Petzl XP2 CORE is available for $110.