Prior to last week, I don’t think I’d considered the need for a top-loading camera bag. Sure, I backpack and hike, and yes I know I’d appreciate the convenience of having ready access to my camera while still keeping it safe. I just don’t think I envisioned that product actually existing. As luck would have it, I was assisting a documentary film crew in the Utah desert, and the director was carrying one on his front pack strap during a 6-hour technical hike. Ever so often he’d stop, snap a still or shoot some video, and stuff it pack in its case. Two days later, after I made it home, a box with the newly revamped Lowepro Toploader Zoom AW II camera bag was waiting for me. 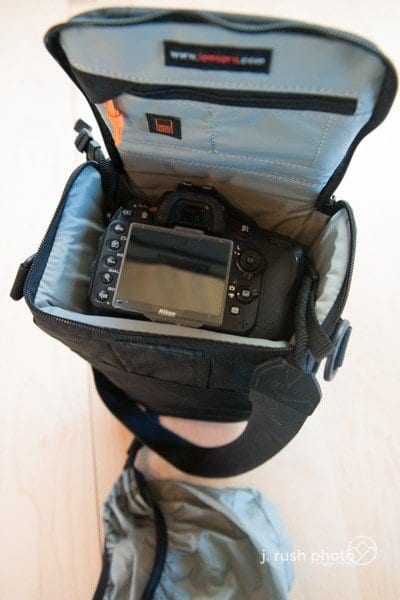 The bag I received is the equivalent of the current series Lowepro Toploader Pro AW 70, designed to carry a full sized professional DSLR and a 24-70mm lens or similar. A first impression of the bag is that it fulfills its basic requirement, which is to carry and provide easy access to my camera. I visualize this bag as the perfect utility for a birdwatcher or tourist in the middle of a nature hike,  but that’s a disservice to the function of the Lowepro Toploader Zoom AW II; in any circumstance where you would otherwise have to stuff your camera in a backpack or back in the car, this bag keeps it close. How many times have I missed “the shot” simply because I got tired of lugging the camera around on the trail, or needed both hands?

The exterior is a black nylon with minimal access points, namely the top (thus Toploader), and the front accessory pocket. The front pocket can fit a couple of batteries, an ND or graduated filter, and perhaps a remote and lenscloth. The toploader is basic awesome, a made-up phrase used to describe something that works as it should. Plenty of padding lines the contour of the bag to protect your many thousands of dollars worth of camera and lens. There’s a an adjustable “basement” that seats snugly on the velcro tracks at the bottom, allowing you to house a smaller lens than the 24-70 if necessary. Feel free to stash a couple of memory cards in the icon-labeled velcro pocket at the top of the interior. 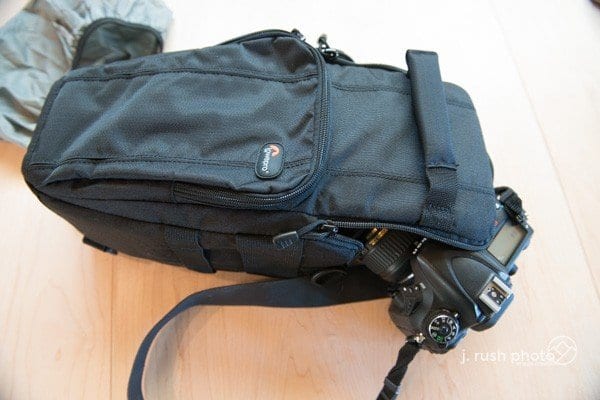 Every feature of the Lowepro Toploader Zoom AW II is sturdy, so I won’t say it again. The grab handle at the top is reassuring, making a pass to the photographer or transport simple. The side straps are designed to allow backpack webbing in order to carry the bag on the outside of your high volume backpack, but the coolest feature, and likely most relevant for a real trekker, are the utility rings on all four corners. Using either cheap plastic clips or lightweight carabiners to clip to the straps of your main pack, you can rig the bag to sit on your chest like a baby. Numerous times I looked over to see the director on our shoot easily pulling the camera out for a quick snap, but also using the bag as an arm rest!

There’s a rudimentary shoulder strap, perhaps a bit too simple as it lacks a cushioned pad. The coup de grace of the AW series though is the All Weather rain cover attached and secured via a small compression pocket at the bottom of the bag. An image of some National Geographic explorer weathering a monsoon in the heart of the Congo comes to mind and if put to the test, this bag would shine in those conditions. 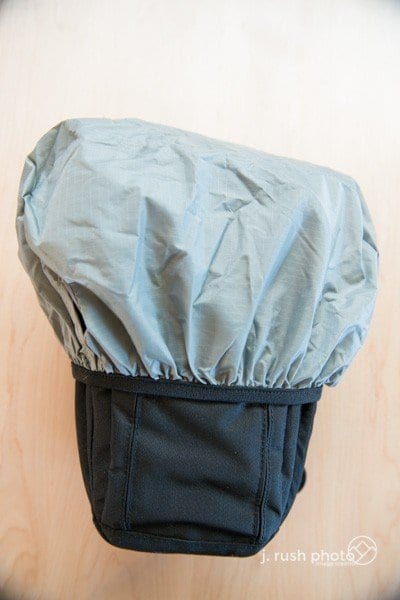 Borrowing from Lowepro’s own PR team, the Lowepro Toploader Zoom AW II is “Designed specifically for active photo enthusiasts, these bags provide solid protection and feature a fast-access, body-facing, and compact design.” But that’s a limiting description as I’ve said any enthusiast or pro-level shooter with a need will find this pack makes life easier and keeps their bacon-maker safe and secure.

MSRP for the Lowepro Toploader Zoom AW II should be the same as the current series at $79.99. Based off of the previous series, the bag will come in three sizes, to accommodate short and long (200mm) lenses.

Jay moved to Colorado in 1993 after working the ski lifts at Crystal Mountain, Washington following high school. He has split the last 20 years as a snowboarder, telemark, cross-country and alpine skier. Jay is a freelance photographer specializing in adventure sports and portaiture. His summer passions include surfing, mountain bike and cyclocross racing, hiking, and yoga to heal his battered body. He lives in Vail with his wife, herself a former professional snowboarder, and two dogs. Jay's photography can be viewed at www.jayrushphoto.com