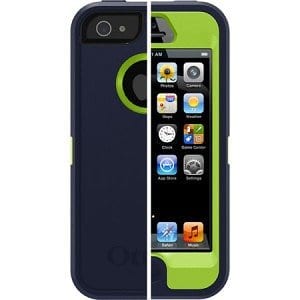 As someone who takes their phone with them on all their adventures including hiking, mountain running, skiing, snowshoeing, and trips to the city, protecting my phone has become more and more important.  I say this as my past two phones I have owned went unprotected as I thought cracking my phone wouldn’t happen to me.  Well I broke 2 phones in the span of 2 months and I swore it would not happen again. When I switched from the Droid platform to the new iPhone 5, I wanted to be sure that my phone was going to be protected because replacing it would be extremely expensive.  The Otterbox Defender Series is for those who want the maximum protection for their electronic devices such as the iPhone 5. 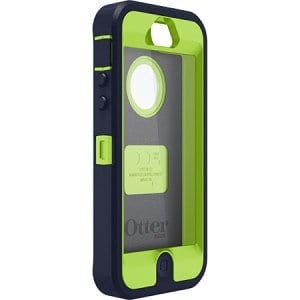 Having used to the Otterbox Defender Series for my iPad and loving it’s hardcore protection and practical functionality, I was very interested in testing out the Defender Series for the iPhone 5.  To start, the Defender Series for the iPhone 5 has 3 layers of defense, or protection.  On the outermost layer, there is a grippy beefy rubber that absorbs the shock in the event of a fall.  This rubber has held up very well after testing it for 3 months.  I am constantly removing the outer rubber layer to see if it holds its shape and it is like the day I got it out of the box.  The outer layer of rubber does a nice job of gripping onto any surface it is on as well, which helps it from slipping off a desk, car dash, etc.  The one downside to the rubber being so sticky as when you put it in your pocket as it even grips the inside of your pants pockets as well.  There are 3 adjustable areas in the outer layer of rubber.  One to turn the ringer button on or off, one that covers the ear phone jack, and one to cover the charging port.  The charging port gets the most action and it has stayed well in tact over a 3 month period.  I have seen previous iPhone Defender Series case where the rubber would break down over time, but I am not seeing that with the iPhone 5 series.

Under the outer rubber layer, there is a hard plastic casing that comes in two pieces that snap together.  This is the layer that is best at taking the hard impact accidents and drops.  Connected to front of this casing is the 3rd layer of protection which is a clear layer to protect the screen from getting scratched.  As I mentioned, it is a thin film so it will not do a whole lot to protect the screen from cracking if something falls direction on the screen. 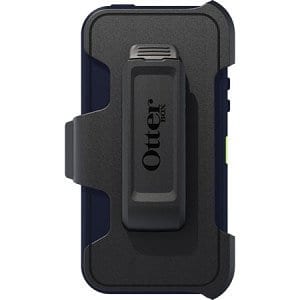 One important feature of a good case is that it allows you to use the product as it was intended.  For me, this means being able to use all the buttons for their intended use.  One the iPhone 5, there is a button to turn the screen and phone on and off, 2 buttons to adjust the volume, and the center button near the bottom of the phone.  All buttons work just fine with no obstructions from the case.  And while it’s not a button, the speaker for the phone is on the bottom of the phone.  This part of the case is open to allow for maximum sound quality.  The camera on the front and back of the phone are also unobstructed to allow for the best picture quality while taking photos or videos.

For those that like to clip your phone to your belt buckle, there is a hard case holster that comes with this case.  I personally don’t use holsters, but I know some people like them so if that is your thing, you’re in luck!

While the Otterbox iPhone 5 Defender case does an amazing job at protecting your precious iPhone 5, it is not for everyone.  This case tends to be a little too bulky for many people.  I feel that this case is best for people that are either extremely clumsy or for people that take life to the next level which endangers the health of the phone.  This is not the only iPhone 5 case by Otterbox, so it is good to look at other cases by them if you want a smaller case.  My one wish for the Defender Series case is that it was waterproof.  While it is not a big issue for me, it would be great if I didn’t have to worry about that.

If you decide to purchase the Otterbox iPhone 5 Defender Series Case, placing your phone in the case can be a little tricky.  You will need to remove the rubber from the hard plastic case.  From there, you will need to separate the hard plastic into two pieces and place your phone in the case.  For a first time user, it can be a little challenging, but after you do it once, it’s pretty easy to take in and out of the case.