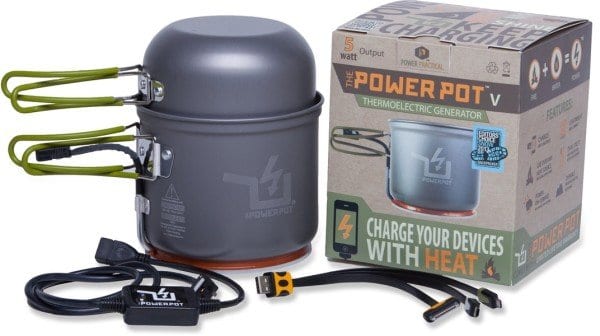 Ever been at a campsite or a mountain hut warming up by a fire, and wishing you had some juice to power your electronic device?  While many might think solar panels from companies like Goal Zero are a solid solution; a company named Power Practical offers a product that captures thermoelectric power by introducing the PowerPot 5.

Solar panels are light, compact and can easily be deployed just about anywhere, but they have a profound limitation. Mainly  sunlight.  Depending on a traveler’s locale, the chances of having cloud cover or being stuck under rainfall can be greater than clear skies.  And some might even be traveling in regions where tree canopies shade you from the sun.  In these instances, solar panels are going to be less effective and result in unnecessary pounds to your pack.

We all eat multiple times a day, and cooking a simple meal provides the perfect solution  The PowerPot 5 is a clever product and is basically a mess kit item.  It’s a pot, but with a thermoelectric generator mounted to the bottom of the vessel.  This light, compact and practical item works on open flames, electrical coil stoves (if you’re wondering), and can even capture energy atop an iron stove.  As long as there’s heat, the PowerPot 5 will capture the thermal energy. 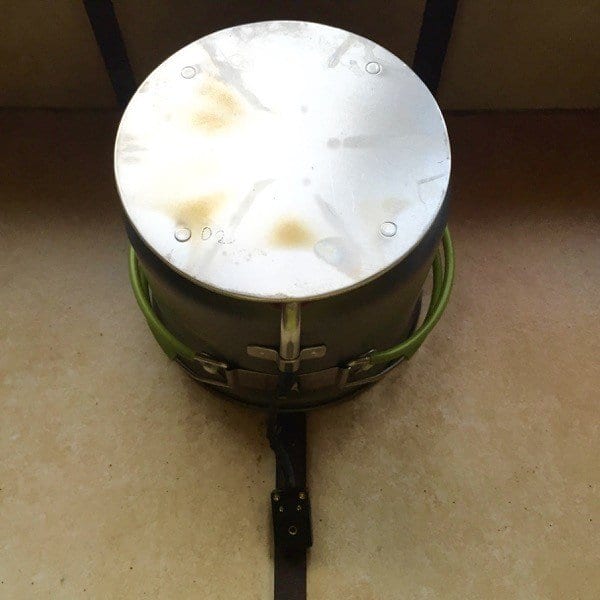 The PowerPot 5 that was tested is a 1.2L pot that comes with a combination lid/serving bowl. All nicely packaged in a mesh bag to keep both halves and the electric cabling all together.

The cabling provided is a two-piece kit.  The first piece is a USB charging cable that connects to the PowerPot base.  The second is a cable that includes three charging adapters with an in-line LED indicator showing the charging strength.

For reference, the adapters included are three styles of mini-USB.  Together the three will power common devices such as Bluetooth speakers, most Samsung and Motorola phones, and the wide adapter used on the iPhone 4.

This system will work with most electrical devices, with the exception of the newest Apple products that utilize the lightning adapter seen on the iPhone 6. 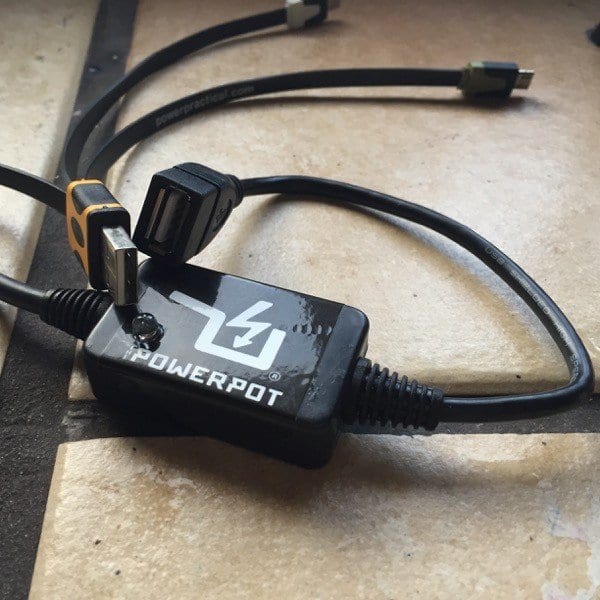 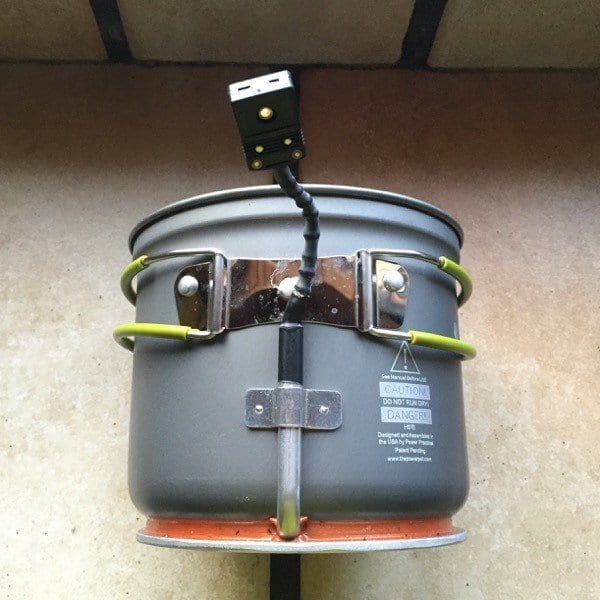 Depending on the trip planned ahead, users may look to strip the lid/serving bowl and simply utilize the pot on its own.  In either configuration, the weight difference is only a few ounces (11oz without lid, 14oz with lid). The pot itself doesn’t takes up much pack volume either, especially if you utilize the pot’s space to pack some small items.

To use the kit for charging is just as easy.  Simply connect the desired cabling for device use and place the pot over a heating source with some liquid content you plan to warm.

I note the need for content in the pot because the manufacturer states the PowerPot 5 cannot be operated without any content in the pot.  If ignored it may result in the pot base burning and damaging its integrity.  So while a few may find this requirement an inconvenience, I would think most can wait a few hours until meal time to get a good charge and be efficient.  And if not, simply add water to the pot for quick deployment.  But beware, make sure to not let the liquid boil dry.

After use, the PowerPot 5 cleans up easily with its non-stick liner and if all the content were kept tidy.  If there’s any spillover, users may find it a bit challenging to clean around the handle and main charging cable due to the tight spacing and need for special attention around the electrical components. 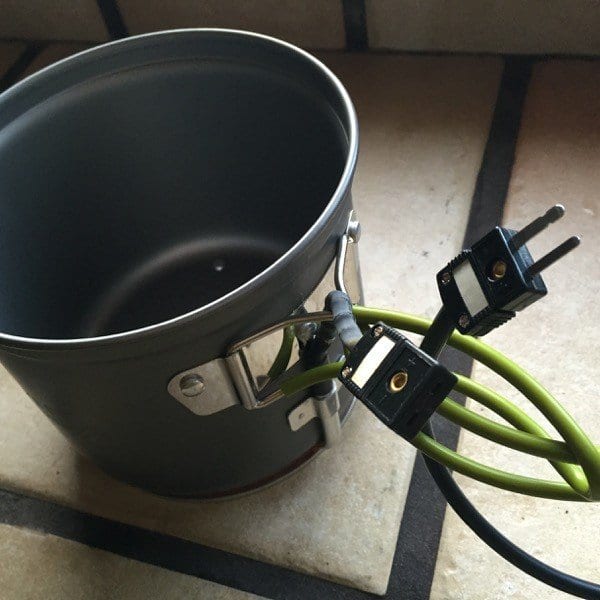 Depending on the device being charged, it may take several hours before achieving a solid charge.  In my test environment, the PowerPot 5 was used over a propane stove at Francie’s Cabin while boiling a few rounds of cold water.  During this session I was charging a SteriPen Ultra from half-charge and it took just over an hour to reach full charge.  According to the manufacturer, the PowerPot 5 is capable of pushing 5 watts.  To put things in perspective, this level of output is about the same as a smartphone charger.

The SteriPen Ultra is small with a low capacity battery, so for those looking to charge a Bluetooth speaker, GPS device, a storage battery, or something like an iPad Mini; it may take several hours before you see the battery percentage increase several points.

Regardless, the PowerPot 5 works simple and does what its supposed to do without issue. Convert thermal energy into electrical energy. 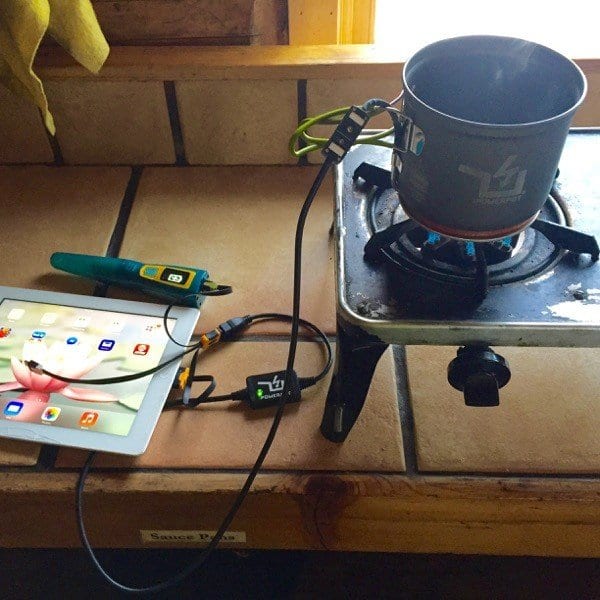 Depending on the trip length and the need for electrical support, a remote charging device like the PowerPot can be a necessity or a luxury.  In either respect, this kit is efficient at satisfying the charging need for most users.  It may not be as minimalist as a solar panel setup, but it does the job with ease and works as a functional piece of a mess kit.

At an MSRP of $99 the PowerPot 5 is a good value, especially when compared to solar kits that can exceed the $170 price point.

With time I would like to see the PowerPot 5 evolve into its second generation and cleanup some of the wiring and stability issues I noted.  It would also be exciting to see an extended product lineup beyond the PowerPot 5 and the big brother PowerPot 10.

Perhaps we’ll see a smaller vessel that has a charging element wrapped around the exterior, in return increasing the chargeable surface area and pack more punch. Think of a JetBoil with its insulating sleeve protecting the charging element, and absorbing more heat…  Maybe thats just wishful thinking for now.

I'm a New York transplant, now a Colorado resident for over 6 years and living in the Vail Valley; life isn't too shabby with rivers in my backyard bursting with trout, winter steeps that balance the resort access, and high-alpines huts to escape to on the weekends. While tackling marketing efforts behind a desk on a typical weekday, once the hand strikes 5PM I'm out on the river casting my 5wt landing trout (brookies, cut-throats, or rainbows) or exploring the trails between Vail Pass and Eagle on my bike. Sometimes the weekend offers the opportunity for a new adventure, cruising as far as Moab to ride the Whole Enchilada or backpacking to Vestal Peak.