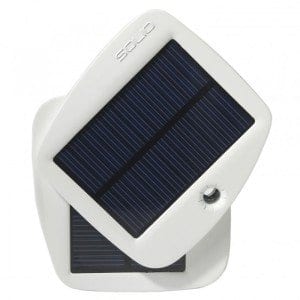 The Solio Bolt is a simple device that seeks to do a simple job; provide a backup energy source for your electronics when you are away from an outlet. This wide bar-of-soap-sized plastic object combines a 2000 mAh lithium ion battery with a pair of small solar panels.  I tested the Solio Bolt primarily with an iPhone 4s to see how it would fair.

The Bolt’s internal battery can be charged up in one of two ways.  By plugging the included USB cord into a powered USB port, it takes about 4.5 hours to reach a full charge.  This method ensures you start out with a full battery when you leave outlets behind, and don’t want to rely on the sun to get you started.  The other method of charging the Solio Bolt is obviously the built in solar panels.  As with all solar charging methods, charging times are largely dependent upon the availability and location of the sun.  In optimum conditions (i.e. panels pointed directly at the sun with no clouds), the Solio Bolt will reach a full charge in 8-10 hours.  According to the Solio website, optimum charging times are between 10am and 2pm, so a full charge will take at least two days of sun exposure.  While this is a limitation, remember that you can still charge a device without fully charging the Bolt first.   I brought the battery outside and pointed towards a cloudy sky and sure enough, the little red LED lit up, indicating a solar charge coming in.  The design of the device is such that you flip it open to reveal the two solar panels and I found this to be a smart way to keep it compact when not charging.

To test the Solio Bolt’s ability to charge devices, I plugged a completely dead iPhone 4S into the battery and started a timer.  After 2 hours, the Bolt was out of juice and the phone was at about 90%.  This is a little out of line with what Solio claims, but an important note is that I used the phone multiple times while it was recharging.  I would expect the Bolt to meet the company’s claims of charging an iPhone 4S in 1.5 hours if I had not used it during this time.  Given the size of the Bolt, I am quite happy with its charging capabilities and capacity.

A few suggestions for improvement:   1)  I would like a method of connecting the charger to the outside of pack for collecting sun when hiking – perhaps a hole for a small carabiner or similar would work perfectly.  2) The rubber cover to the USB ports is frustratingly difficult to remove, and could be redesigned.  3) the fold-out hinge does not give a very durable first-impression (not sure if it actually is), and may ultimately require some reinforcement.  These small quibbles aside, I would recommend the Solio Bolt to anyone looking for a convenient and simple method of having some extra juice when away from power for extended periods of time.  At $70, the Bolt is a solid value when compared to some of the more expensive options available.