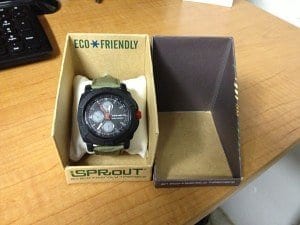 Eco-friendly manufacturing was all the rage a few years ago, as social consciousness and eco awareness stepped into the spotlight as a hallmark of a younger generation. Unlike other fads of the past, the eco-friendly movement has gained steam over the past few years. Consumers are becoming more knowledgeable with their purchases, making educated decisions concerning every facet of the product. Organic cotton, biodegradable fibers, and materials that minimize waste are the new gold standard of manufacturing. Sprout, after 50 years of manufacturing watches, decided to give those savvy consumers yet another choice – offering watches that are “an alternative to the status quo.”

While their website offers numerous styles of watches, they are primarily fashion pieces, with a few “active” attributes thrown in. A large portion of the lineup is water resistant up to 165 feet, which is a new feature for them. Per the website, they “put so much R&D into making a watch out of corn that we literally passed out from exhaustion.” So the first offerings from Sprout concentrated largely on the eco-friendly attributes (which we will discuss later in the review), while the latter efforts added water resistance in order to attract a larger market share. These watches are paired with straps made from either rubber or Tyvek, which is the band material we tested. 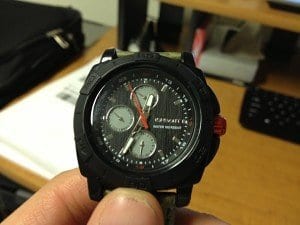 Note, Sprout’s watches will say if they are water resistant or not – this model does.

My first impression in the box was highly favorable; the picture on the website doesn’t do the dial/face justice. The face has a subtle wood grain texture in the underlying colors that requires a second glance, and the crown/dial (made from corn resin to be biodegradable) has a slightly textured look. Overall, the effect is striking. The green on the band, however, was definitely not the shade pictured on the site. It’s much brighter, and somewhat obtrusive in person. Much like rubber, the Tyvek band can be dyed to match any color, so the bands come in a multitude of colors. I was surprised when I took the watch off the cotton pillow (another not so subtle eco-friendly nod) at the extremely light weight feel of the time piece. At first glance, it’s easy to assume that light equals cheaply made; not so – simply taking a closer look at the face, crown, and band show a sturdy, neatly made product. 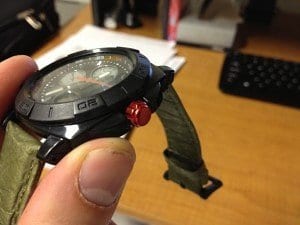 The dial on the side is framed by two corn resin “horns” so as not to stick into your wrist uncomfortably.

The model I tested, as previously mentioned, is part of a new lineup from Sprout, consisting of three small dials on the face (date, day of the week, and 24 hr indicator) three hands (second, minute and hour – the minute and hour hands are luminescent), and a small winder on the side for adjustments. Right out of the box, the watch was set correctly to my time zone (either by accident or by the friendly people at Sprout – if so, thanks!), but since this is for review purposes, I immediately began to fiddle with it to see how it works. It’s intuitive if you’ve ever adjusted a watch before, as the winder pulls out to two separate stops; one of the stops adjusts the date, the other adjusts the time/day of the week. Simple enough, but yet I still felt the urge to read the instruction manual. In another eco friendly nod, Sprout does not package an instruction manual. They request instead that you view their website. I wholeheartedly agree with this decision, as I always get a little peeved at the sheer amount of space instruction manuals take up, to mention nothing of the waste they generate.  I’d always much rather assume the consumer has access to digital media of some sort, and proceed accordingly. Well done Sprout.

Next came for the wearing of the watch itself. As for testing, I wore the watch 24 hrs/day, 7 days a week for just under 10 days. I performed all of my normal routines, including working out, working, showering, and sleeping with the watch on. I much prefer a leather band for everyday wear, metal for dress up/evening activities, and some sort of rubber/poly-resin construction for working out. As mentioned before, the watch is intended much more as a fashion piece than a true active watch, so this was a bit out of range for the watch itself. Sprout does advertise the watch for the “active” person, though, so I wanted to give it a chance. At first, I do have to admit I felt that the tyvek band was a bit stiff and awkward. It didn’t seem to flex right on my wrist, and it seemed that the fit was awkward, which was a disappointment. After a days wear, however, it was much more comfortable, and seemed to soften up a bit. I was skeptical of the Tyvek material in and underwater, though, as it feels much more similar to leather than rubber. I definitely should not have been concerned, as the band dried immediately, and after repeated exposure to water, did not have any negative effects. The band did seem to swell a bit after being submerged in water for a longer length of time, so I’m not sure if long term exposure to salt water (it’s advertised as being able to surf) would be the greatest idea. 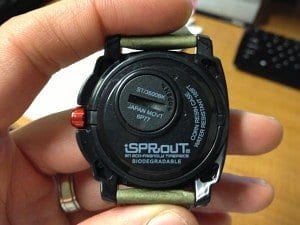 I thought the back of the battery casing would be uncomfortable – it wasn’t noticeable.

In terms of running, though, I didn’t like the feel of the watch when I worked up a really good sweat. The reason I like a different type of band than this for truly active pursuits is that I don’t like that sticky feeling that results from repeated exposure to sweat. Once again, this is outside the advertised usage of the watch, so it’s not really a big deal. To the credit of the people at Sprout, though, the stickiness quickly washed off with water. The function of the watch was great over the days that I tested it, and didn’t seem to lose any time at all – only a few seconds, if that. The only real complaint I had about the watch is that the luminescent material is not nearly bright enough in the dark; when compared to other watch brands, it was lackluster at best. 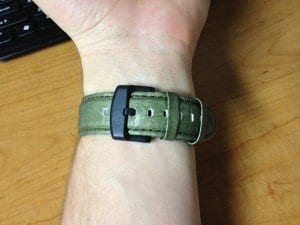 That band is really, really green. Corn resin clasp on the underside; Sprout certainly has attention to detail.

To give credit where credit is due, Sprout has a great concept – we think of the environment in nearly every endeavor these days, so why would we not buy timepieces that reflect this as well? They married this concept with a product that functions well, and is aesthetically pleasing. The best part? The price point for almost every product they sell is well below $100. Read about their impact on the environment, their company goals, and check out their instruction manuals at www.sproutwatches.com.