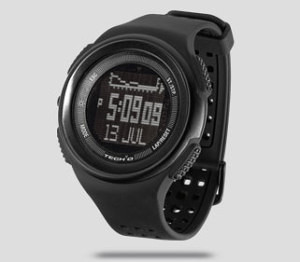 If you’re even considering an ABC (altimeter, barometer, compass) watch, you have something slightly wrong with you. By that I mean you really, really love pain too much. Something inside you not only wants to suffer through gut bending outdoor adventures, but wants to know how best to repeat and quantify said adventure; here at AGR, we just happen to have that same masochistic tendency. Of course, you could make a case that these watches are simply too complicated (and you’d be right if you’ve never worn a heart rate monitor – let’s be real about it), but tech4o sets this watch up to be easy to use, and kinda fun.

The basic set up of the watch consists of two separate menus to access. Toggling between them sets you for two “modes” – trail menu and time menu. The cool thing is they keep working simultaneously. For instance, if you want to set a countdown timer, chronograph, and then flip over to trail and set up the distance you traveled while tracking changes in altitude, you can actually do it all at the same time. And I did, multiple times, just ‘cause it felt cool. The best part of this was that I was easily able to manipulate all four features while running.

Like any ABC watch, there are slight drawbacks. First up, the speed/distance function. This is not accurate AT ALL unless you calibrate it. The reason? It’s essentially a pedometer. Once calibrated? Spot on, if you are a good pace runner. The trick is that you have to always use the same stride length. It was really cool on casual hikes to know how far you’d gone, and on long runs, for that matter. The Tech4o website has a stride length calibrater, if you can’t figure it out yourself. As for altimeter and barometer, these worked surprisingly well for a self contained unit (meaning it has no GPS or satellite communication). We tested this not only on runs and hikes, but over longer distances, such as frequent drives over mountain passes. It works by measuring barometric pressure, and it was fairly accurate, except when storms move in quickly. This is not a problem specific to this watch, however – it happens w/ all ABC units. The biggest drawback to this system is this if you are constantly at differing altitudes, it has no way to monitor changes in barometric pressure, and can not accurately calculate the weather patterns. So for a week, we kept it at a constant altitude to see if was accurate in it’s weather assessment – it was once again spot on.

Two more features worth mentioning – a digital compass and calorie counter. The digital compass was fairly sensitive to electrical signals, and wasn’t too accurate in the city; since we have these handy things called “street signs” it really didn’t bother us too much. It was very accurate on the trail, telling you the exact degree from North. While the calorie counter DOES function off of the pedometer and is therefore hopelessly lost if you don’t program your weight in and stride length (remember – calories are merely a function of mass moved through space), it wasn’t too far off when compared against a heart rate unit. Yes, I was that guy running down the street with two watches, a heart rate monitor, and an IPod. The result? You know this watch makes the grade. Would you like an added bonus, AGRer’s? It looks cool as hell, and only retails for around $160, making it the most cost effective watch WITH the most features that actually work. Slam dunk, Tech4o.

# Onboard accelerometer measures speed and distance