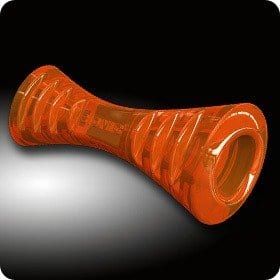 For the dog lover in all of us, keeping our pets entertained and happy is often at or near the top of our priority list.  Having 2 Airedale Terriers who are often looking for something to do, I am always on the lookout for the next great dog toy that can entertain my dogs to keep them happy and busy.

The challenging thing with many dog toys is that so many of them last for a day or two and then they are shredded or destroyed.  Over the last few years, there have been a few dog toy companies that have come out with more durable rubber dog toys including Bionic, who’s products we’ve recently tested.  In specific, we tested out the Bionic Urban Stick which is a mix between a throw toy and a chew toy. 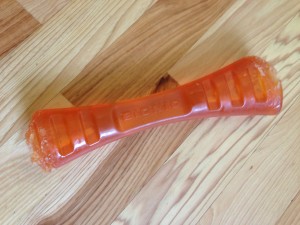 Bionic uses an incredibly durably rubber in their toys that can withstand most dogs chompers.  As both of my dogs tend to falsify many indestructible dog toy claims, I was interested to see how this rubber would fair against others we’ve tested in the past. Through our testing, the two dogs liked the Bionic Urban Stick best for chewing instead of throwing and I have to agree with them.  Throwing a Frisbee or ball is much easier and they go a lot further.  For chewing, my one male Airedale Terrier named Aspen likes to chew on this much more than the other dog Suki which is typically the case.  As many of us know, you can buy a dog toy for your dog and he or she will lose interest in it after an hour or two and never play with it again.  In the case of the Bionic Urban Stick, Aspen typically picks up his urban stick to play with ever few days which is pretty good in my mind.  This bone/stick gets much more chew action that his other bone toys. 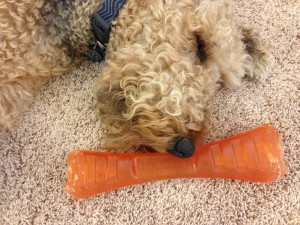 After 2 months of play, I have found the bone to get chewed down a bit, but it still has plenty of life on it.  My guess is another year and a half.

What’s nice about this dog toy is it’s hollow in the middle allowing Aspen’s mouth to chomp down and it springs right back into shape.  He generally chews on it for about 15 minutes and his jaw is pretty tired at that point.  After that, he tries to chew it apart and he has had some success, but still has a long ways to go. 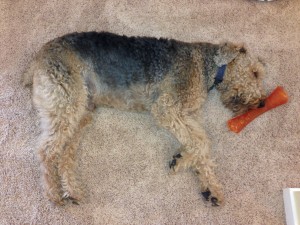 Aspen and my other Airedale Suki tested out a size XL which was plenty big for their liking.  The Bionic Urban Stick is pretty big and I feel with their sizing that you can even go down a size and it would still be fine.  To give you a reference, Aspen weighs 78 and Suki weighs 58.

For more information on the Bionic Urban Stick and other dog toys made by Bionic, please visit https://outwardhound.com/