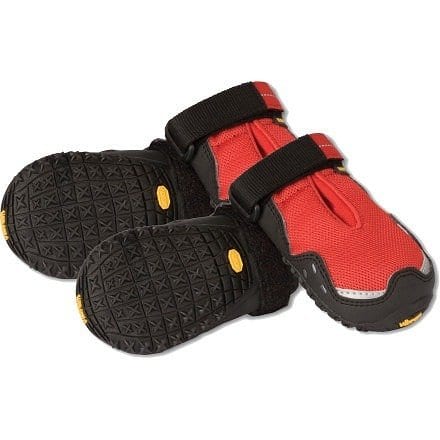 A few years ago, we headed down to Great National Sand Dunes National Park in early May. We figured we could get out early in the morning with the dogs and hike around, before the dunes got too hot. Boy, were we wrong! By about 9:30 in the morning, the dunes were so hot that the dogs were refusing to walk, and sat down while lifting their paws in alternating manner in the air. We then carried the dogs (60lbs and 70lbs each) down the dunes, taking frequent stops to rest, holding them on-top of us. This was the first time that I thought about our planned adventure’s impact on our dogs paws.

Thankfully, companies like Ruff Wear exist to help meet the needs of dogs that go out into the wilderness. The Bark’n Boots are a prime example, and offer excellent protection for your dog in a variety of conditions. Suki, our fabulous female dog tester, had the opportunity to test-drive these boots over the past few months in Colorado.

Regarding size and fit:  Ruff Wear provides a detailed size guide and instructions on how to measure your dog’s paws. I felt that the boots ran true to size, however, I wished that I would have measured all four paws. Some dogs, my Suki included, have different sized paws. She could wear a smaller size up front and size up for the back. Each boot is identical to the next; no boot is specific to right, left, front, or back.  Therefore, I always recommend measuring and giving them a trial run, if possible, in the store. In the future, I would buy a package of each size and combine them (mixing sizes) to make a primary and a back-up set.

The boots are relatively easy to slip on once your dog is familiar with the process; after a while, Suki would sit and hold out her front paws in anticipation of an outing. Simply slip the boot on, adjust the velcro closure strap, and you are done. I recommend letting your dog run around for a bit, and re-checking the boots to ensure they are tight enough. In the beginning, it is challenging to know how tight is too tight, especially if you have a furry dog. So, when you first get going, you will find yourself glancing at your dog’s paws quite a lot. After multiple hikes in the mud, and even in deep snow, I still have all 4 boots. The boots are sold in sets of four, but there is a small note on Ruff Wear’s website that says the boots ARE available as a single boot. So if you happen to lose one, which you shouldn’t with proper fit and micro-adjustments, you don’t have to replace it with an entire set. 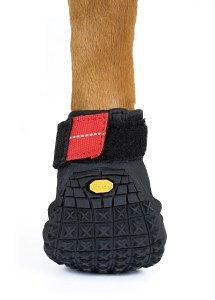 The Bark’n Boots feature a non-marking Vibram® outsole with lugs designed to maintain grip and control while your dog is on the move. Dogs are built with innate crampons, or claws, that grab and adapt to the changing conditions. Fortunately, with the Bark’n Boots, Suki’s ability to frolic in mud, dry dirt, scree, ice, and snow, was not compromised. When comparing her traction with boots to Aspen (our other dog testers) sans boots, she could hang right with him.  The difference, however, was that her paws didn’t have any cracks, sores, excess mud, or snow-balls wedged between her pads. Aspen on the other hand, had to take more breaks to chew out snow between his paws.  The boot upper is composed of air mesh, which kept dirt and small rocks out of Suki’s paws (her paws remained slightly drier as well).  The mesh is designed to ventilate, and unfortunately Suki can’t tell me if she had a swampy sensation in her feet on our last hike.  I used them also during day-hikes on dry ground, and her paws at the end were dry and clean.  The non-marking outsole may also work nicely for those who take their dog boating; the Bark’n Boots deliver good traction without the surface scratches.

The Bark’n Boots require a little bit of break-in, just like a human’s new pair of shoes. Ruff Wear offers some easy tips on their website. I simply kept the boots in a warm part of the house (not stored in the garage in winter) and worked the soles with my hands back and forth for a few minutes before each wear. I did this for about two weeks. Suki, the primary boot tester, didn’t complain about initial stiffness (despite doing the “boot dance”), but I felt that a more pliable outsole must equate to a more comfortable foot strike. As for storage, the boots come with a nice little stuff sack that helps keep them all in one place. 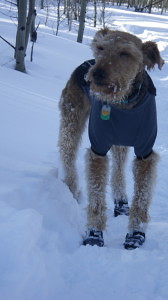 Suki testing out the boots; note the snow on the outside of the boot that would otherwise be stuck to her fur

The Bark’n Boots are the do-all boot for your dog, with an emphasis on hiking and paw protection. We found, however, that the boots cross over well to winter pursuits, stayed put, and eliminated pesky snowballs. If you are questioning which kind of boot to purchase for your pooch, please read Ruff Wear’s article on “Selecting the Right Boot”.

The boots are available in 6 sizes, based on paw width (not length), and two colors: gray and red. 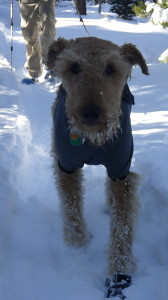