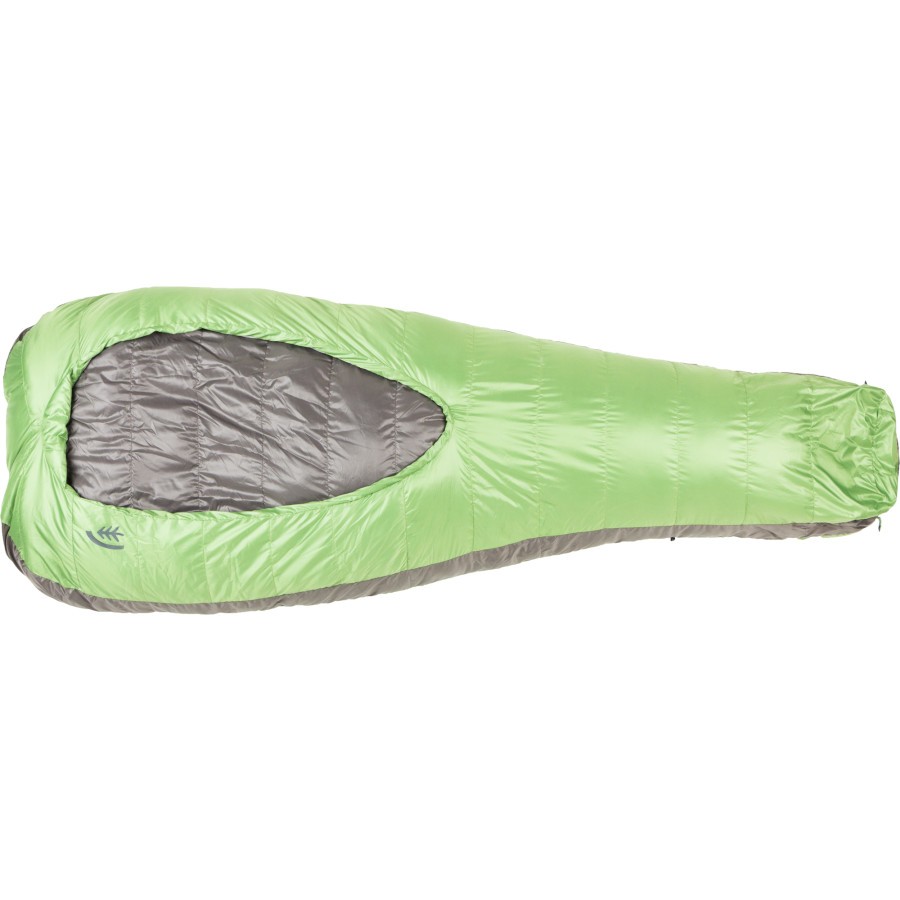 Sierra Designs  makes gear as innovative as it is useful.  If you’ve ever used any Sierra Designs product you’ll know what I mean – they practically live outside. Actually, I should probably fact check that, as some of their staff may actually live outside all year round. As we test out quite a bit of product here at active gear review, it’s saying something when gear becomes part of your “go to” lineup. I can confidently say that when (and if) I wear this bag out, I’m getting another one. Period.

To begin with, Sierra Designs upped the ante by creating not one, but two lineups of non-traditional sleeping bags for camping and backpacking use. Backpackers tend to be picky, and Sierra Designs does a good job (not just here, but throughout the lineup) of satisfying that pickiness – but car campers and casual campers will really appreciate the comfort and versatility of the Sierra Designs Backcountry Bed as well. Whether you are a casual camper, or love to disappear into the wilderness for days at a time with no life line to the outside world, you still want to be comfortable when you sleep at night. The Sierra Designs Backcountry Bed allows for multiple sleeping positions, and perhaps most importantly multiple sleeping styles. Throughout the testing period, I let several people get in and out of the bag, and even swapped bags (a mistake) with a friend one night – not a single person had a bad thing to say about it. Enough with the fanboy mentality, though – let’s take an actual hard look at it. 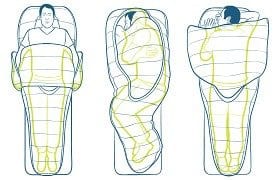 Over the summer, we were able to put the Sierra Designs Backcountry Bed to good use on multiple camping trips. No back packing for us this summer, as the two little guys tend to prefer car camping (children are a bit harder to pack in and out with than dogs), and let’s face it – it’s nice to have a quick exit handy in case of emergency. I used the bag in temps ranging from just above freezing at night to fairly warm in the evenings, and in conjuction with the Kelty Mach 4 tent we reviewed last year. Interestingly enough, I got to not only test the bag out in a traditional tent style setting, but also in the ENO one link sleep system. In both situations, the bag performed great. This is my first outing in a non-traditional sleeping bag, so I wasn’t actually sure what to expect. All of my bags have been mummy style with zippers/drawcords, and while they weren’t bad bags, they also were just that – bags. You’d have a decent nights sleep, get poked by the zippers, get the zipper caught on the side when having to take a leak in the middle of the night, lose your sock, get the cord wound around neck, and so on and so forth. They were comfortable, but still left me wanting to crawl into my own bed at home just to be able to sleep on my side during the night. Also, I’m a mover when I sleep – I typically roll from side to side frequently throughout the night, and don’t stay in one place. This makes for a bit of a hassle in your typical mummy style bag. Also, after several years of wrestling with sleeping pads, I finally settled on a Big Agnes Air Core  pad – this was the only pad I used in all my outings with the Sierra Designs Backcountry Bed. This doesn’t fit with the Sierra Designs Backcountry Bed pad sleeve, so remember when purchasing to check out pad compatibility. I didn’t have a problem not using the sleeve, so it was an issue with me. 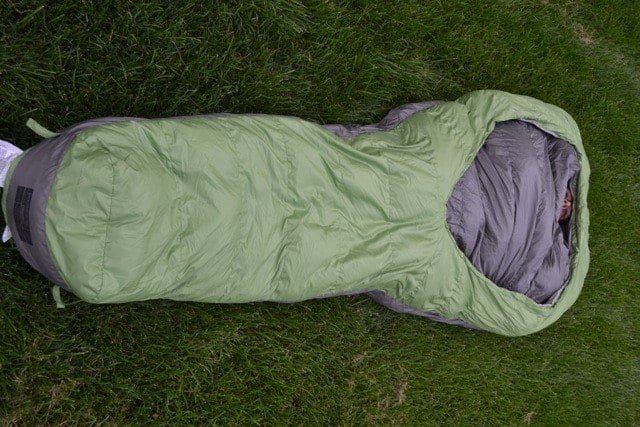 The first thing I noticed when pulling it out of the packaging was the above-mentioned lack of hardware. The Sierra Designs Backcountry Bed feels more like your favorite comforter than an actual sleeping bag, which is very much part of it’s appeal. This is why I say it’s really just a great product for all types of campers – who doesn’t want to be more comfortable when they sleep. I love the seamless feel I get from the bag due to this, and how it eliminates the feel of metal and zippers becoming lodged in awkward places during the night. If you’re like me, and sleep in as little as possible at all times, you’ll love the feel you get when you leave all those cords and zippers behind. This also helps to contribute to the weight of the bag itself. Those looking for drawstrings can check out something from the Garment-Style or the Mummy style line up – don’t fret camping purists (oh, I can hear the scorn already), you’ll always have your traditional bag from Sierra Designs as well, because there are times when it makes sense to have one. 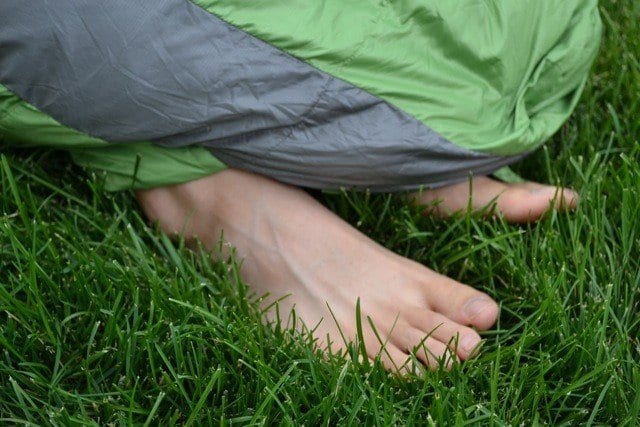 The feet vents on the Sierra Designs Backcountry Bed are double overlapped to prevent heat leakage.

The overall design of the Sierra Designs Backcountry Bed doesn’t stop changing right there. It’s essentially an oval (see the drawings below) with a comforter/flap built into the front. Oh, and they added foot vents (my feet ALWAYS get sweaty on warm nights) and hand pockets as well (finally, someone who gets me) to fully round out the fact that it’s a backcountry bed, not just a bag. I’ll admit, I was a bit worried about the warmth factor at first. I needn’t have been, as it was very comfortable within the advertised range. I certainly was never too cold in the Sierra Designs Backcountry Bed – and I was also never too hot, given the vents/structure of the bag. Just like Goldilocks, I guess. Working from the bottom up, I really appreciate the foot vents. This is not a new idea (it’s integrated into the garment Style bag as well, but for different purpose), but it’s one that just gives you the right amount of choice and freedom for those who like to go snorkeling during the night. (Snorkeling – if you aren’t one us, don’t worry about it. Those who do know what I mean.) The opening is big enough to get both feet out, but small enough that you aren’t losing a ton of heat. Granted, this is a three season bag – I wouldn’t really take it in the ice cave, but for those cold spring nights I didn’t mind the slit, either. 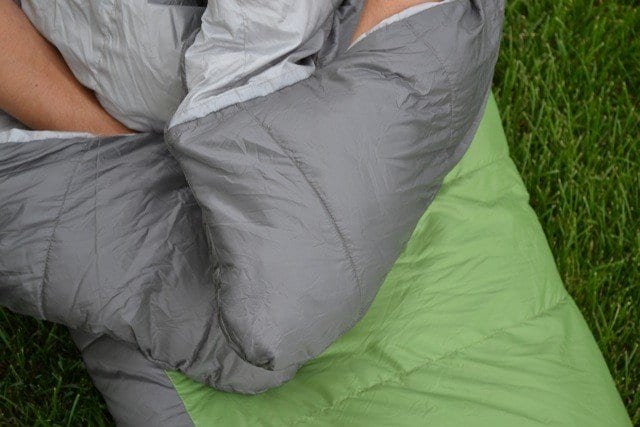 The comforter and hand warmers on the Sierra Designs Backcountry Bed were roundly applauded as ingenious by not only myself, but everyone I had the pleasure of camping with this summer (you know who you are). This also was a bit concerning, as it looked at first glance like it’d let a ton of heat out. Really, it doesn’t, and especially for a side sleeper such as myself, it tucks itself around you very comfortable in the middle of the night. There are a couple of ways to sleep with this – one, if it’s particularly chilly, you can tuck the whole flap in with you. This is the closest you’ll get to the feeling of a traditional bag. I myself didn’t have problems with it coming untucked during the night, but I suppose an extremely active sleeper could experience a chill. On most nights, I slept with the flap out, just like you would with any blanket. I’m not particular cold or hot when I sleep – just as mentioned above, it was a Goldilocks type of feeling for me on every outing. I also really enjoyed the hand warmer pockets – this allowed me not only to (duh) keep my hands warm, but also kept the flap in place securely. 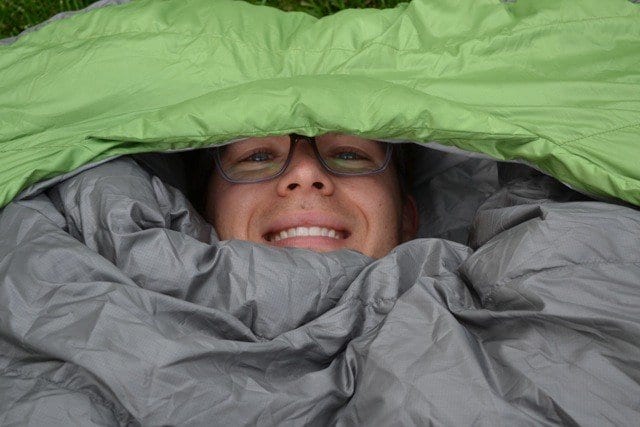 Full “mummy” is still achievable in the Sierra Designs Backcountry Bed – and much more comfortable without all the hardware.