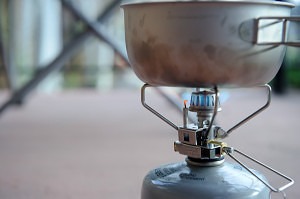 I have always wanted an ultralight and portable backpacking stove that doesn’t sacrifice on cooking performance and the snow peak Gigapower Auto Stove might be the answer.  The Gigapower is a canister-fuel powered camp stove that packs down to about as small as you could possibly get away with while still offering strong heating ability.  Snow peak is known for their high-quality, lightweight cook wear and the Gigapower Auto Stove keeps up the tradition. 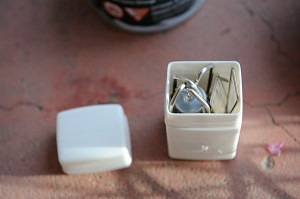 As mentioned before, you’d be hard pressed to make a stove that could pack down smaller than the Gigapower.  Every part of the little stove serves a purpose and superfluous materials have been stripped out.  The stove weighs an impressive 3.75 oz, which is great for anyone trying to keep their load light.  The four pot holder trivets fold up directly over the heating element and allow the stove to fit into an included storage case that is amazingly tiny and can slip into just about any little space you can find in your pack.  I love that I can store it easily in a small pot set and still have plenty of room for some dry food.  The build quality of the unit is top notch and I don’t foresee anything breaking easily during normal use. 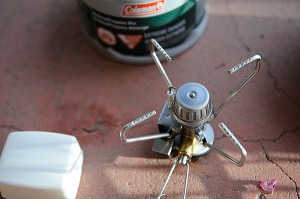 A seemingly simple but awesome feature of the Gigapower Auto Stove is the automatic igniter that lights the unit with a simple button push.  The igniter is a piezo-electric type so it does not require batteries and should last a very long time unless the crystal breaks.  I found the starter to be reliable but it’s always smart to have matches as a backup; they should be in your emergency kit when backpacking anyways.  The flame control consists of a spring loaded wire handle that drops down when the stove is removed from its case.  To ignite, you open the flame control a little bit and push the starter. 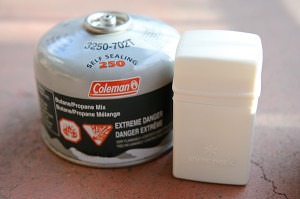 Snow peak claims a boil time of 4 min. 48 seconds for 1 liter of water and I wanted to test out the numbers for myself.  Because I also wanted to test out snow peak’s titanium pot I had, I didn’t use a liter but used 25 oz’s instead.  The stove sounds like a rocket engine on full power so I expected speedy results.  I was not disappointed as the 25 oz’s of water hit boiling at 3 min. 28 seconds, which is perfectly fast for my needs.  This test was performed at 5280 feet and remember that elevation will have a big impact on stove performance so take that in to consideration when comparing boiling times.

My next test was to cook up a couple pieces of bacon and I wanted to see how the flame control handled lower temperatures.  I like to cook my bacon at a lower heat and let it crisp up slowly. Here is one area where the Gigapower has trouble matching its larger competitors.  To get a lower flame, I basically had to turn the control to the point right before shutting off the gas. Even there, I wasn’t able to get a great simmer so I wouldn’t recommend this stove if you rely on really low heat in your camp cooking.  On the bright side, I did find the stove to provide an even heat dispersion, given the small heating element.  One other positive note is that I found the use of 4 pot supports to be superior to the 3 you find on a lot of backpacking stoves.  I found they made me less nervous about my cookware sliding off.

I would definitely recommend the Gigapower Auto Stove from snow peak to anyone in the market for an ultralight backpacking stove.  I have already placed it inside my backpacking cookset, where I expect it to stay for some time.  One final thing I would like to note is that, although I didn’t get to try it out, snow peak makes a $10 optional wind screen that is custom fit to the Gigapower and would be great for high wind environments.  For more information on the Snow Peak Gigapower Auto Stove, please visit SnowPeak.com