Over the last decade, Solo Stove has grown to become one of the top names in backyard fire pits and have developed a devoted and passionate following for the company’s ingenious and sleek fire focused product lines. So, we figured it was about time to see what all the fuss was about and decided to pickup Solo Stove’s largest outdoor fire pit, the Yukon 2.0 to get a hands on with it. 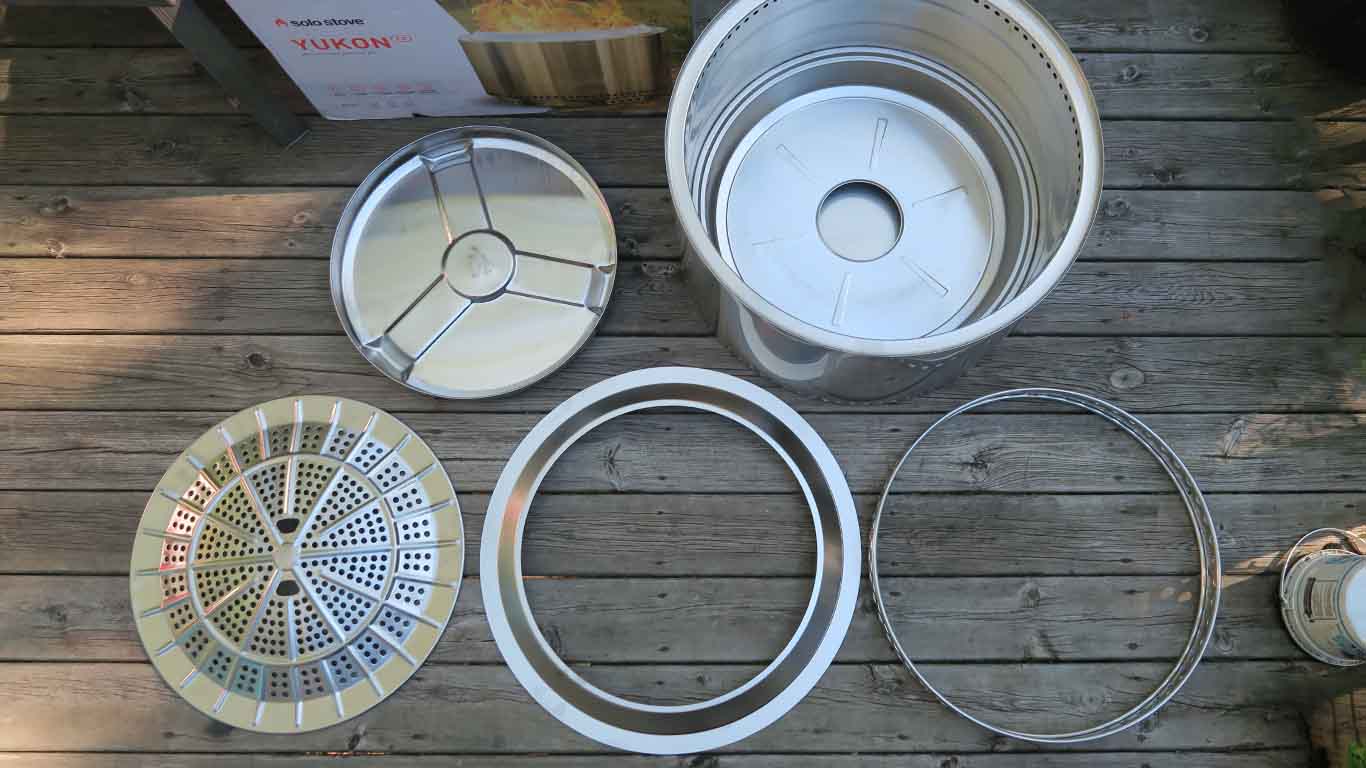 Included in the Solo Stove Yukon + Stand 2.0 Box is:

This Signature 360° Airflow feeds oxygen to the fire and super heats the air to burn off smoke before it has a chance to escape, resulting in a smokeless fire that means no more musical chairs running from the smoke and no more campfire smells on clothes and hair. If you want to take a deep dive on exactly how the 360° Airflow works, Solo Stove breaks it down really well here. 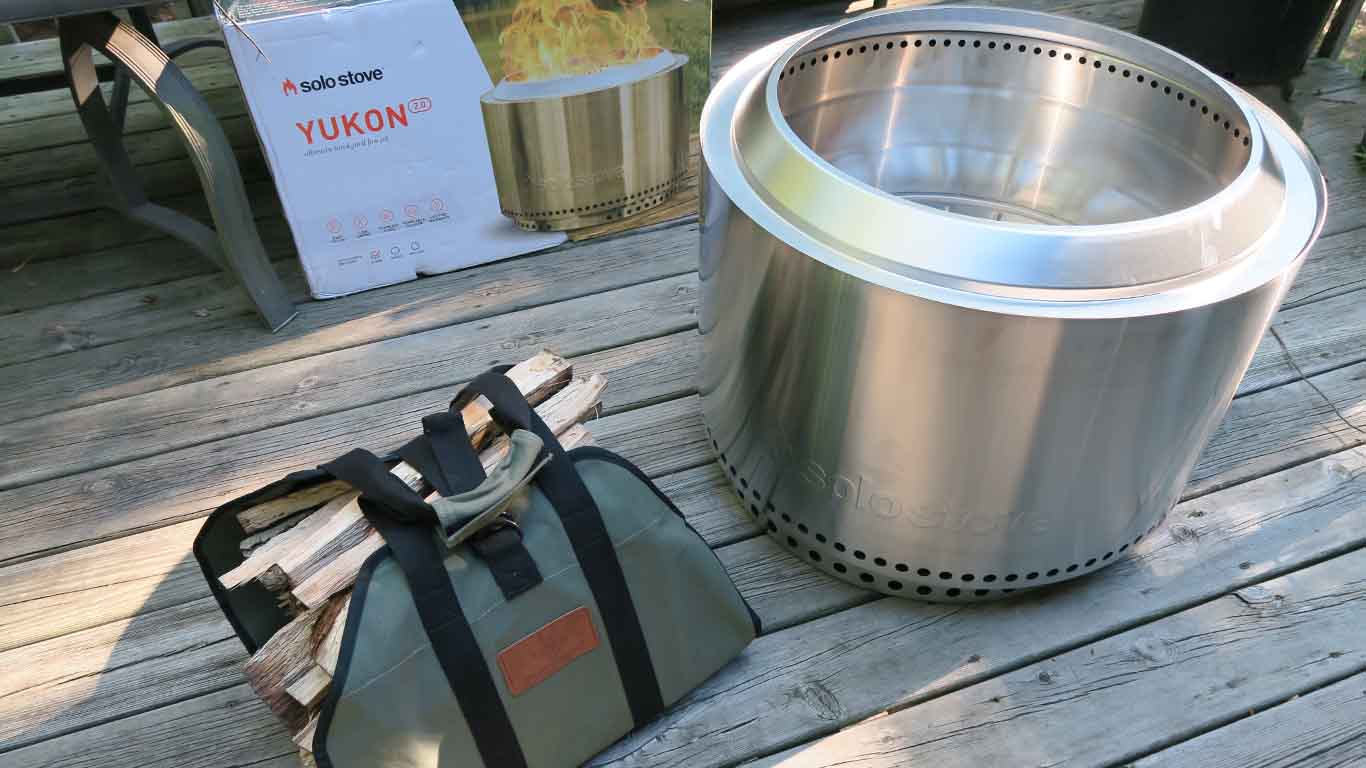 Assembly for the Solo Stove Yukon 2.0 is beyond easy, as it only consists of the five pieces mentioned above – no tools required here, just place the Yukon fire pit on the stand, insert the ash pan, the base plate and top it off with the fire ring.

When the Yukon is used with the stand, it can be lit on almost any surface, from wood and composite decks, to grass, gravel, concrete, and more. The stand does remain cool to the touch below the fire pit, while the sides of the Yukon reach extremely high temperatures. For planned fires that are going to last well beyond a couple of hours, I think I would recommend adding some concrete blocks or some other fire resistant platform under the stand just for that little bit of extra safety. 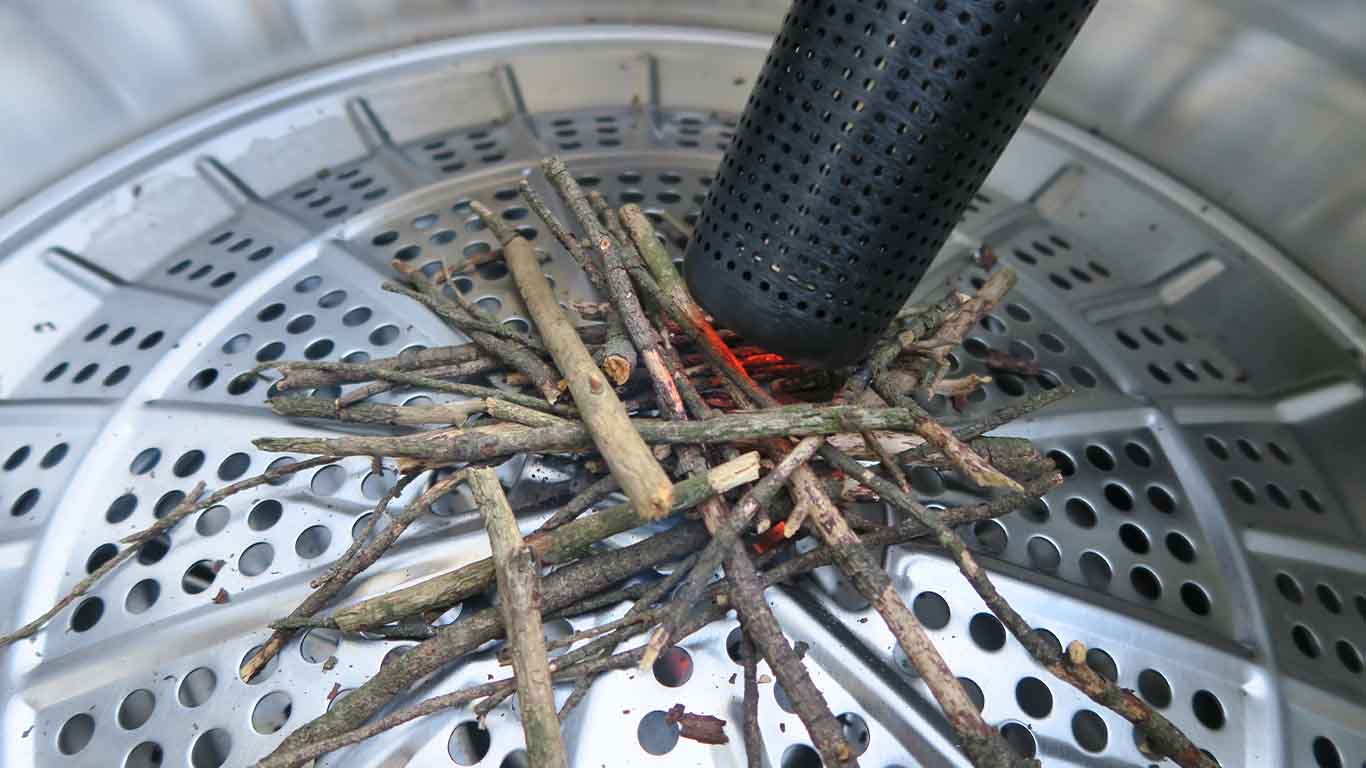 When making a fire I always start small and once the small stuff is lit, I work my way up with kindling until I get to small logs or split wood. The kindling ignited super easy in the Yukon, as the deep well blocks any wind and it started to burn very efficiently from the start, all thanks to the 360° Airflow that provides an abundant amount of air to help stoke the fire. 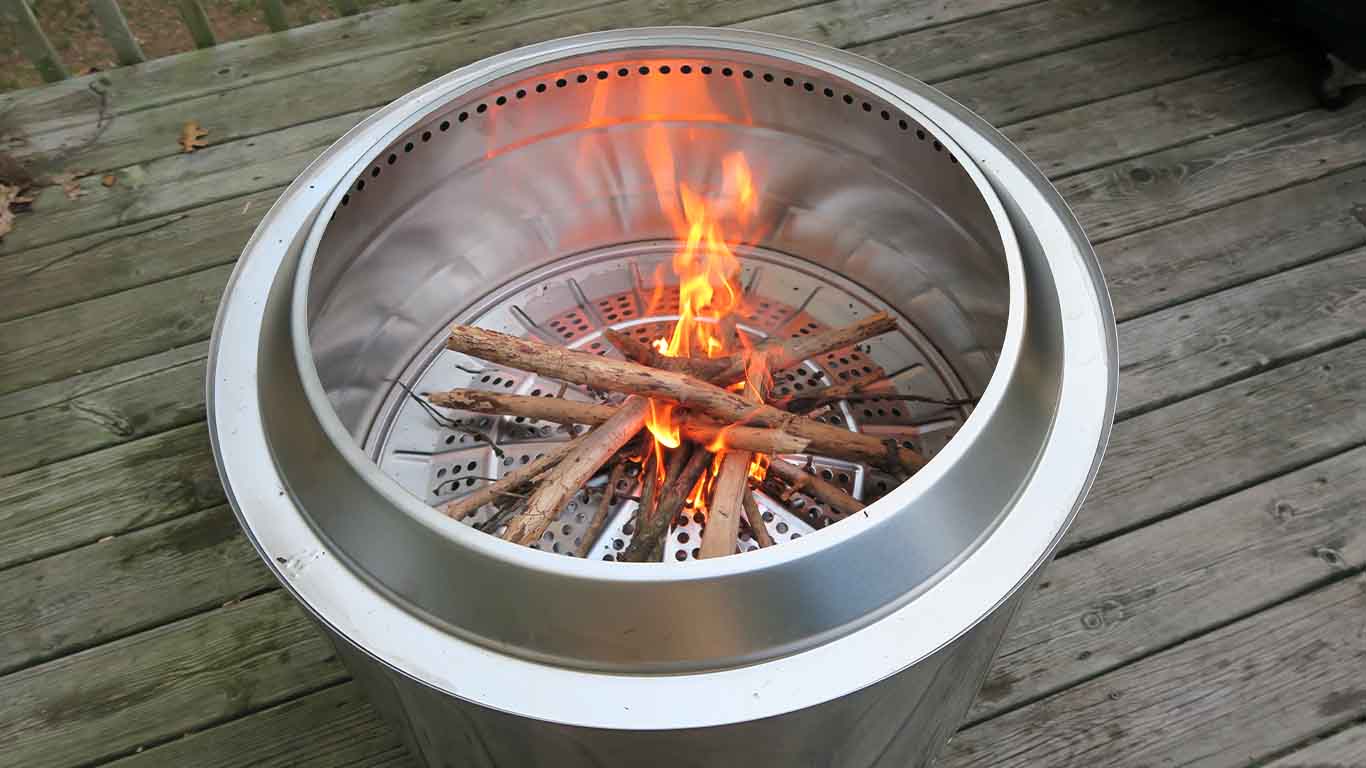 Adding some thicker sticks and eventually split wood, the fire was off to the races. It is an odd sight, but smoke was almost non existent from the start of the fire. 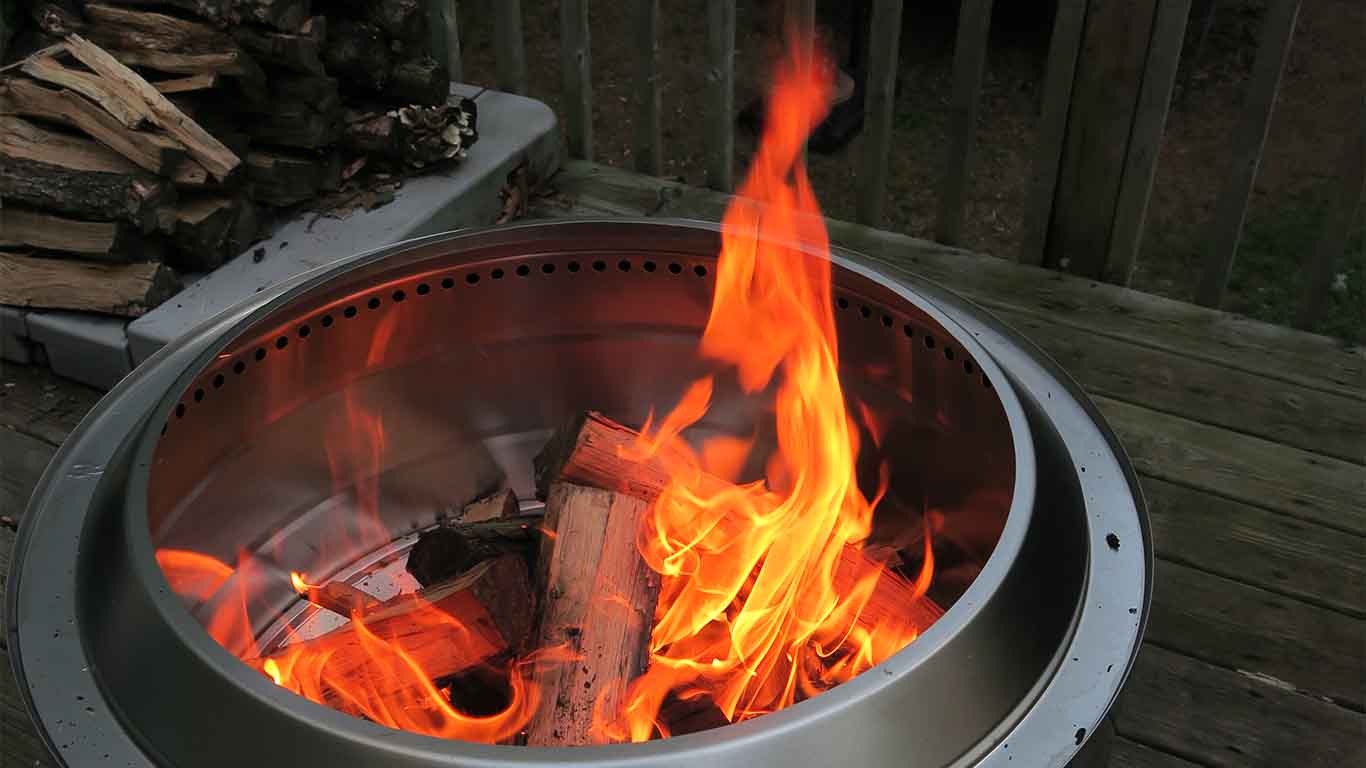 A bit of smoke at the start is to be expected as the air in the fire pit needs to heat up enough so it shoots out of the fire pit’s upper vent holes, effectively burning off any smoke. And once it does that is where the magic happens. 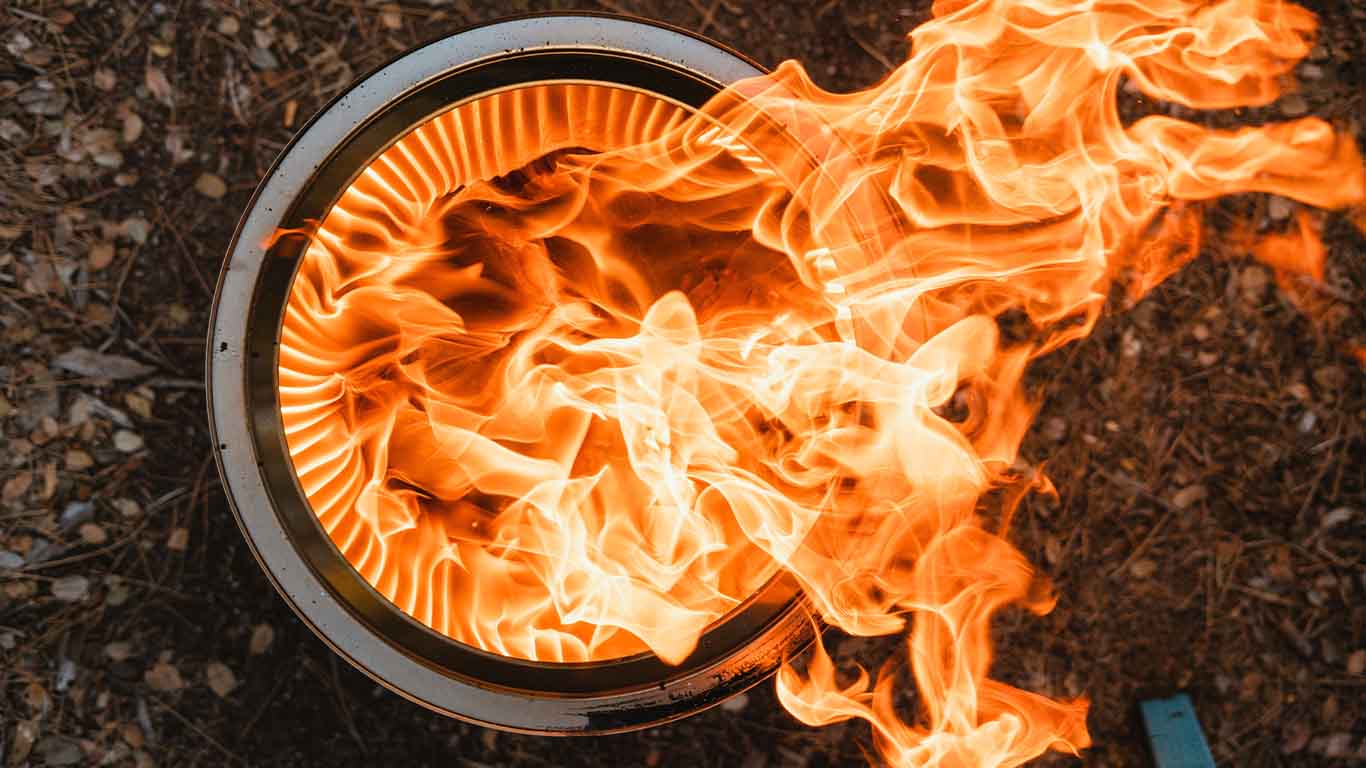 Air silently vents and circulates throughout the fire pit, sustaining an ever growing, hot flame, that eliminates smoke and helps create fine ashes. This efficient airflow means that you don’t have to tend to the fire the way you would in a traditional fire pit. As soon as the logs are lit, they keep burning until they are incinerated into fine ash. On the other hand, this efficiency also means that you will be going through a lot more wood. To help offset those fast burn times, it is good to choose a harder wood as fuel, such as oak which gives longer burn times and eliminates the need to constantly feed the fire. 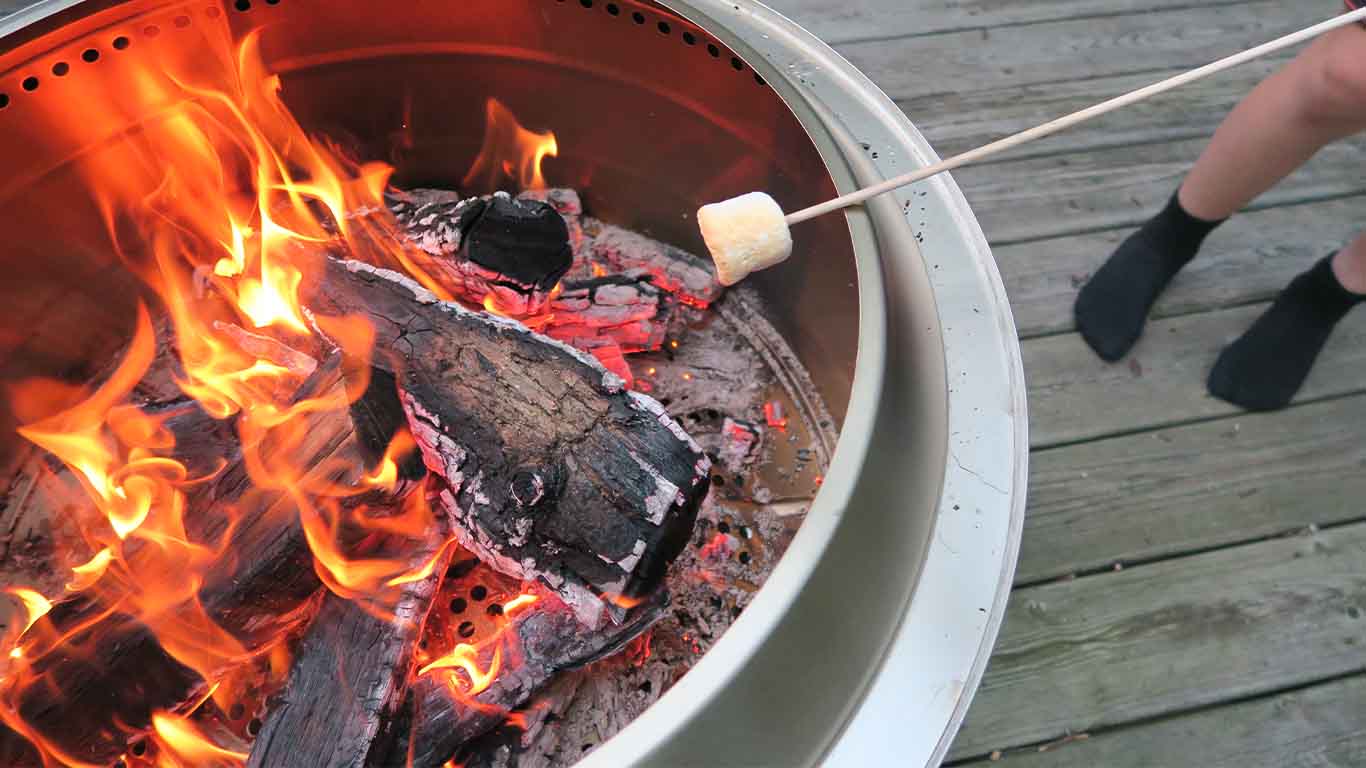 One very cool thing that we discovered is the Yukon roasts the perfect marshmallow almost every time without having to search for that optimal red hot coal pile. And this due to the heat that the stainless steal retains, it easily browns all sides of the marshmallow in just a few rotations of the marshmallow roasting stick, resulting in a wonderfully tanned treat that is perfect for smores.

A few things to keep in mind if you are considering a Solo Stove. A smokeless fire requires an ultra hot environment to thrive in, so logs need to be added to keep the heat up. And remember the upper burn holes I mentioned above, the burning wood needs to be packed below those holes in order to promote optimal airflow to achieve that smoke free fire. If there are logs stick above the rim of the Yukon, there will be smoke.

Cleaning Out the Solo Stove Yukon 2.0

Cleaning the Solo Stove Yukon 2.0 takes just a few minutes and is truly made easy thanks to the new removable base plate and ash pan. Again no tools required, just lift out the base plate and set aside, grab the ash pan and dispose of the ashes as you see fit or check out these five uses for wood ash. 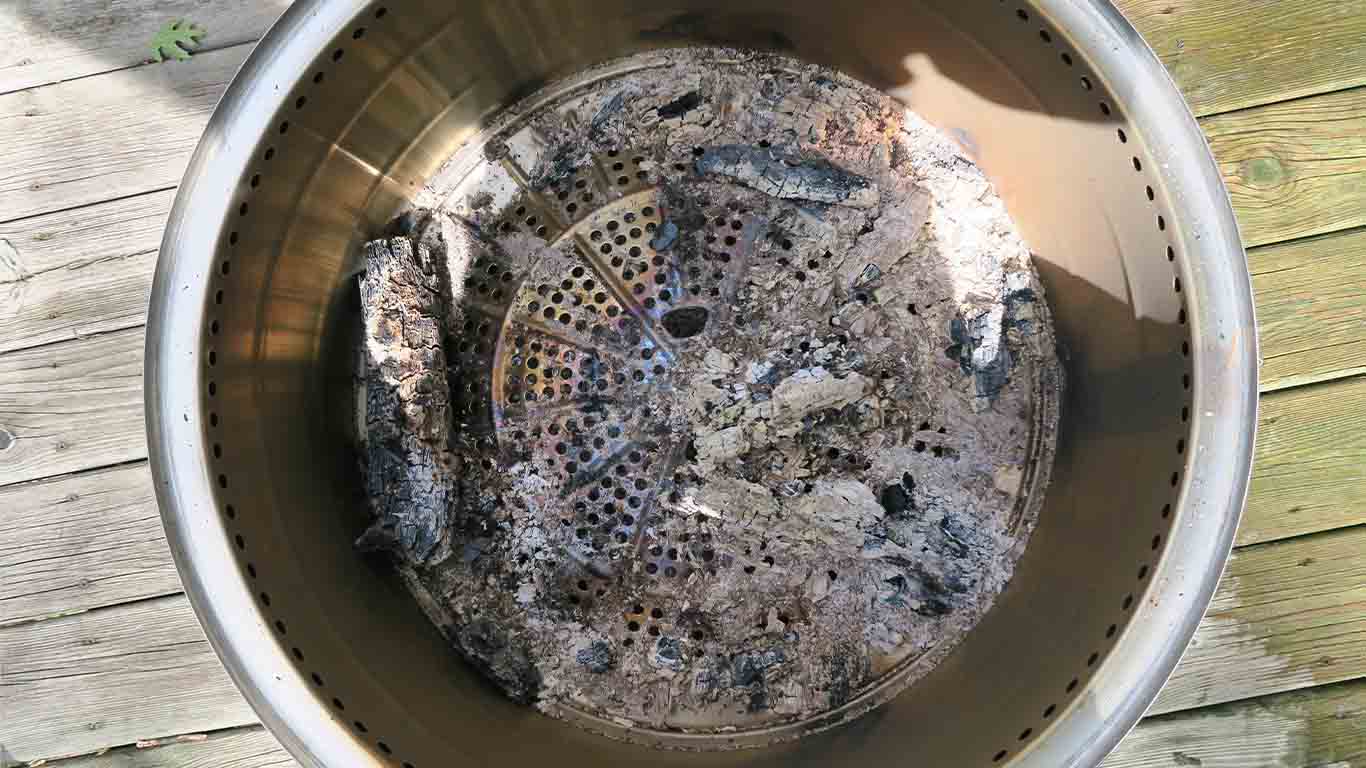 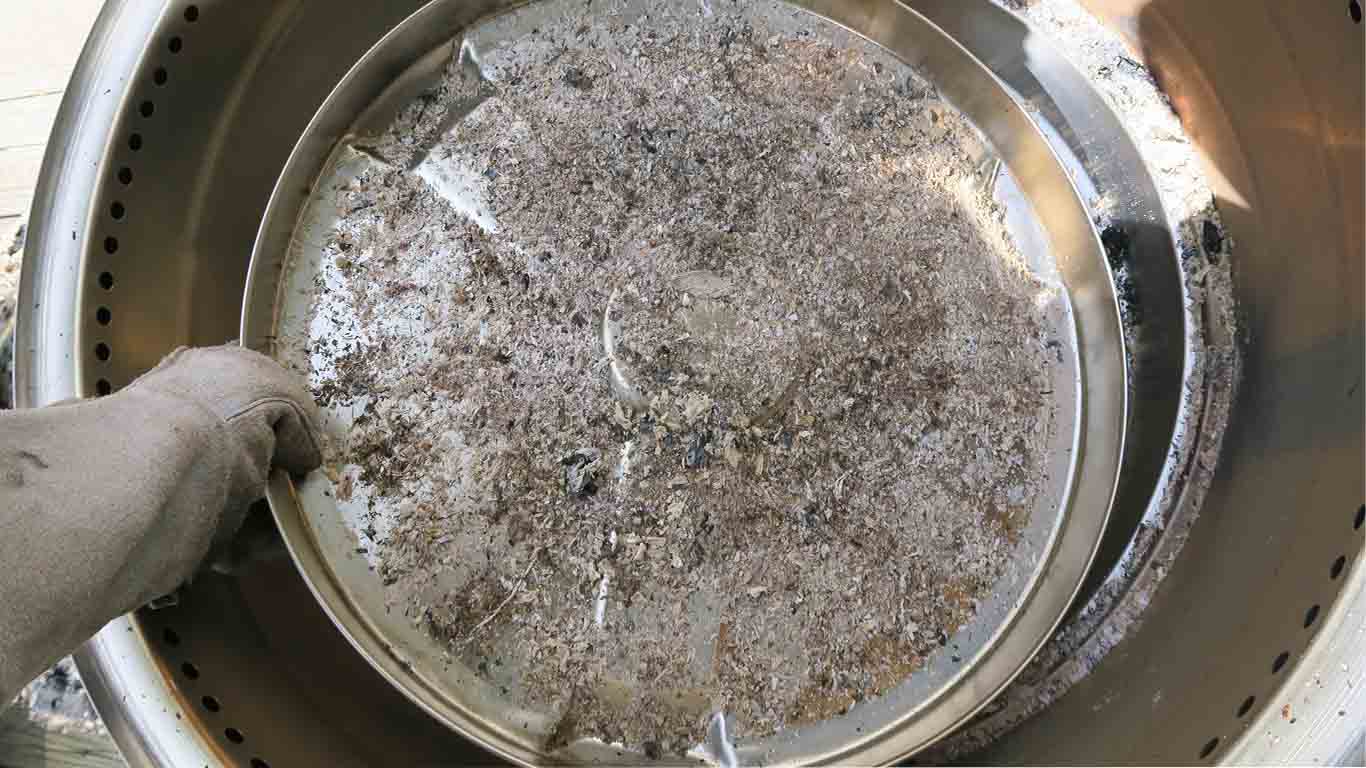 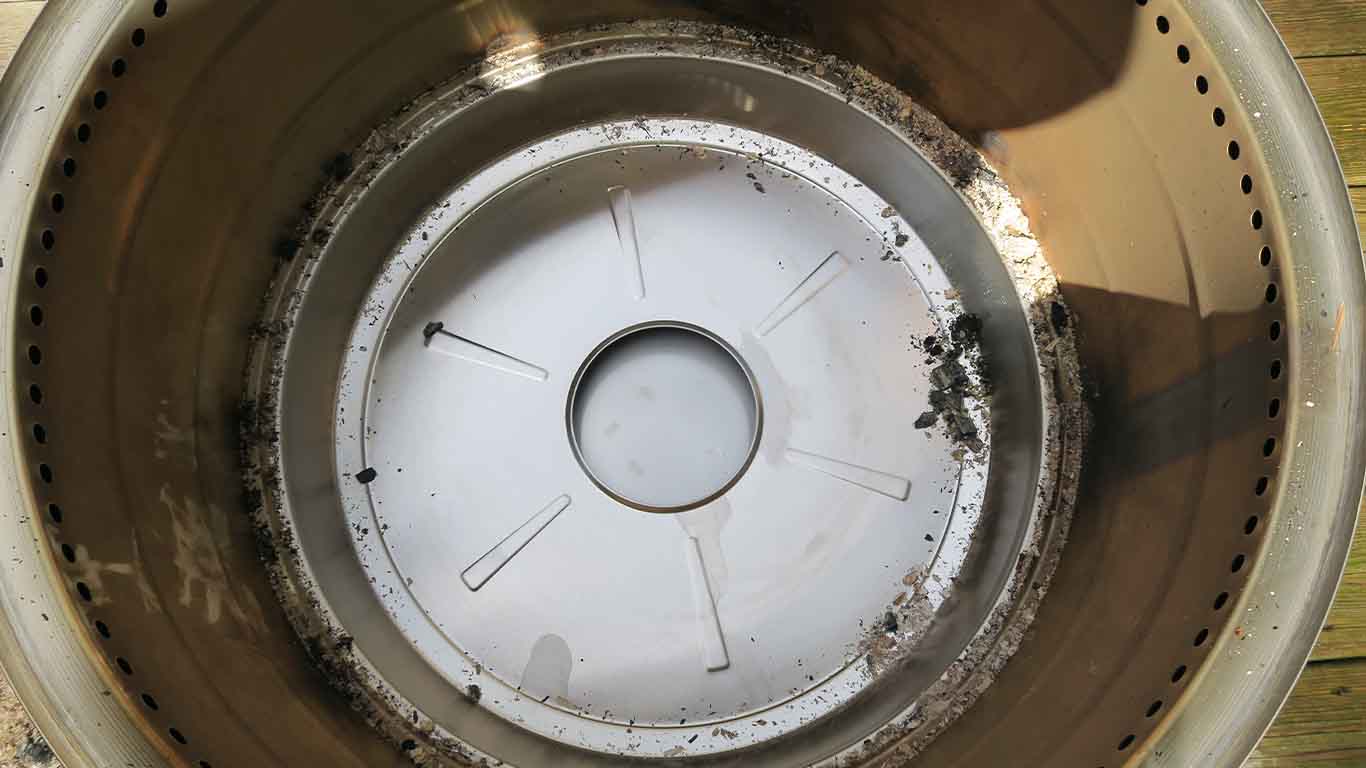 Replace both pieces and you are ready for your next fire. It is recommended to empty the ash pan after every 2-3 burns so that the optimal airflow remains inside the fire pit.

Portability of the Solo Stove Yukon 2.0 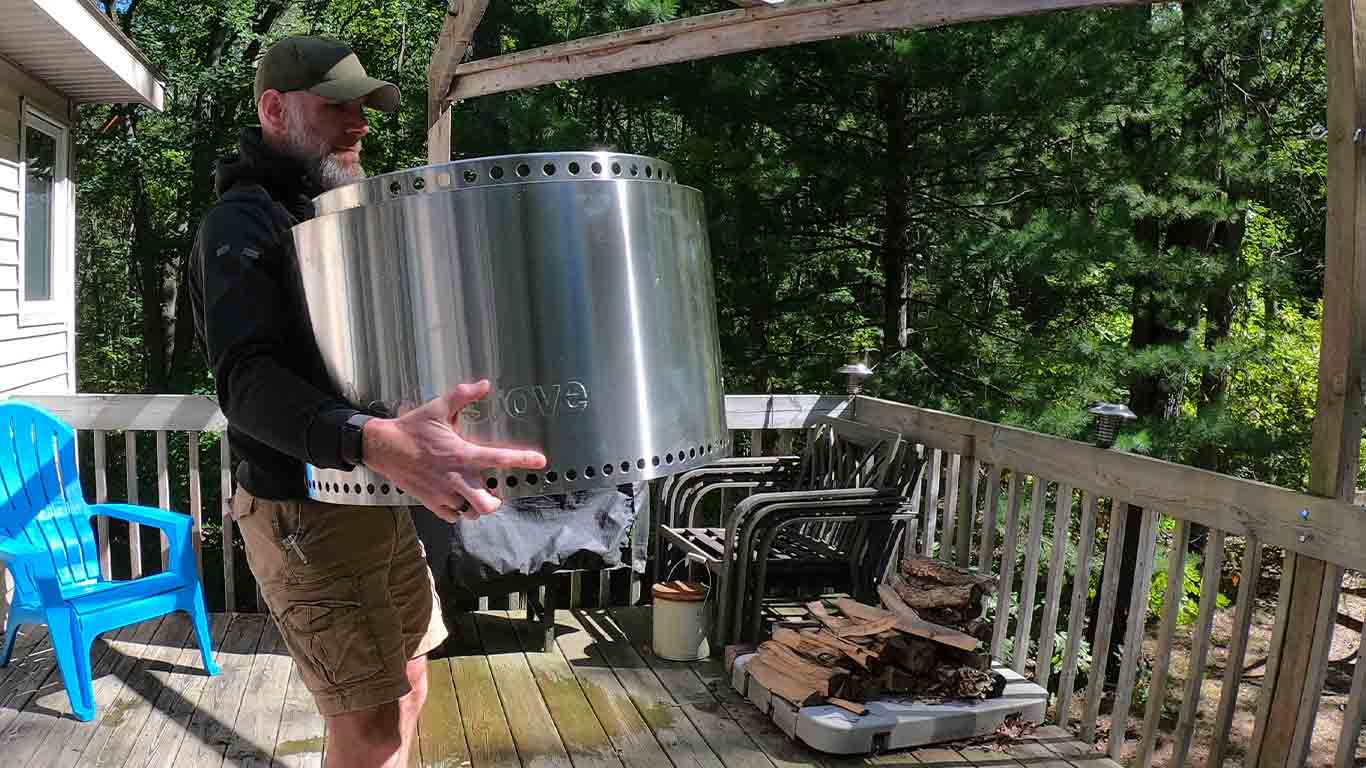 On Solo Stove’s Yukon 2.0 page, they call this thing “Ultra Portable” and state the following; “Weighing in at just over 41 pounds, your fire pit was made to move.” I am no slouch when it comes lifting weights, but at 41 pounds, I am not sure that I would put this in the “Ultra Portable” category, nor say that it was made to move. Can it be portable – Yes. Do I want to move it to every outdoor setting that I want to have a campfire at – No. For me the Yukon is at home in the backyard or on the deck and just maybe I would pack it up and bring it along to some special outings, but if I am going for portable, I would be looking at one of Solo Stove’s smaller firepits, maybe the Bonfire or even the Ranger.

To expand on Solo Stove’s “Ultra Portable” a bit, I should note that they also say, “Spark up smokeless adventures in the front yard or the backyard.” So if you take it from the standpoint of yard portability, then I would agree the Yukon is easy enough to move around the yard, but when we generally dealing in terms of Ultra light camp camping stoves, 41 pounds is not even in the same solar system.

Durability of the Solo Stove Yukon 2.0

The Yukon 2.0 is constructed with 304 stainless steel that is highly durable and doesn’t cave under the pressure of extreme heat. The Solo Stove Yukon 2.0 is built strong and every indication points to it providing a lifetime of fires. 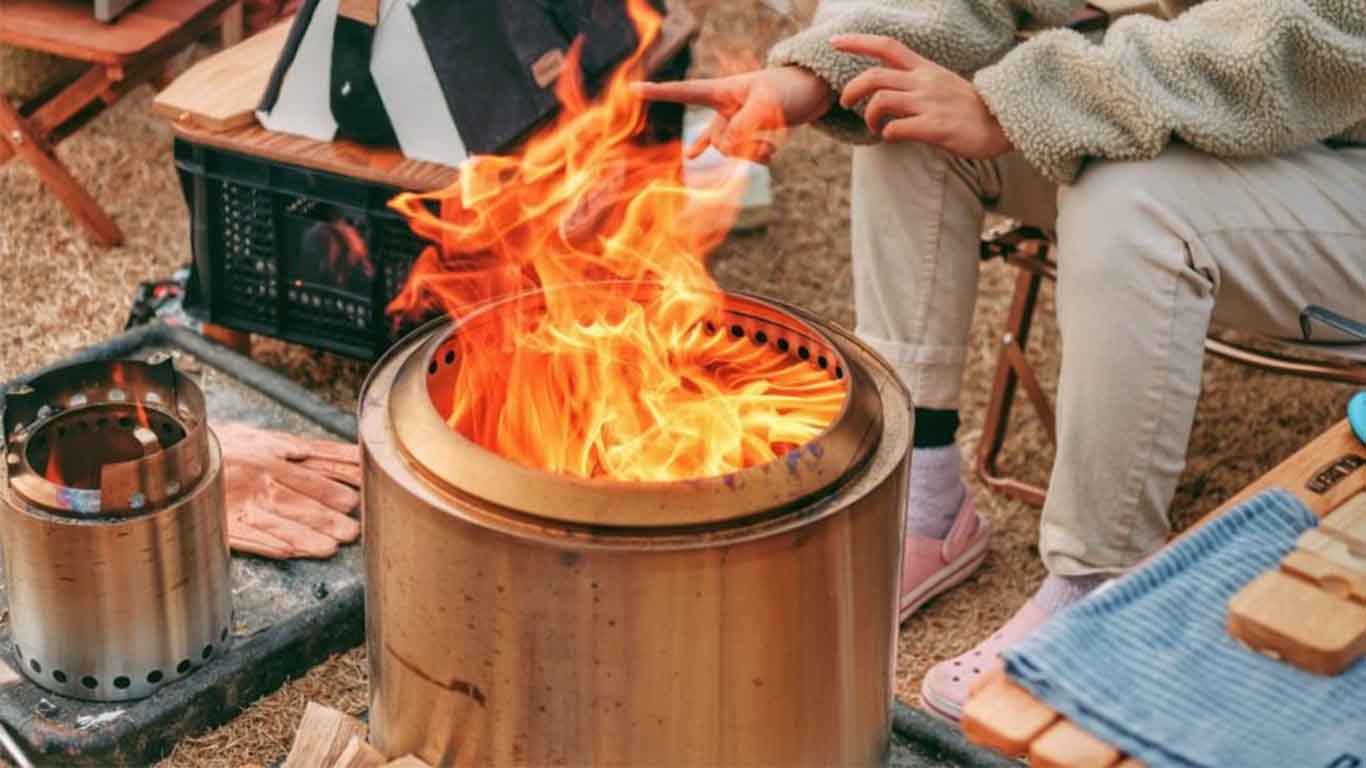 Due to the heat there will be a patina that develops on the outside of the fire pit, which in my opinion gives it a unique look, but if that is not your thing, Barkeeper’s friend is the great way to restore some of the original shine.

Versatility of the Solo Stove Yukon 2.0 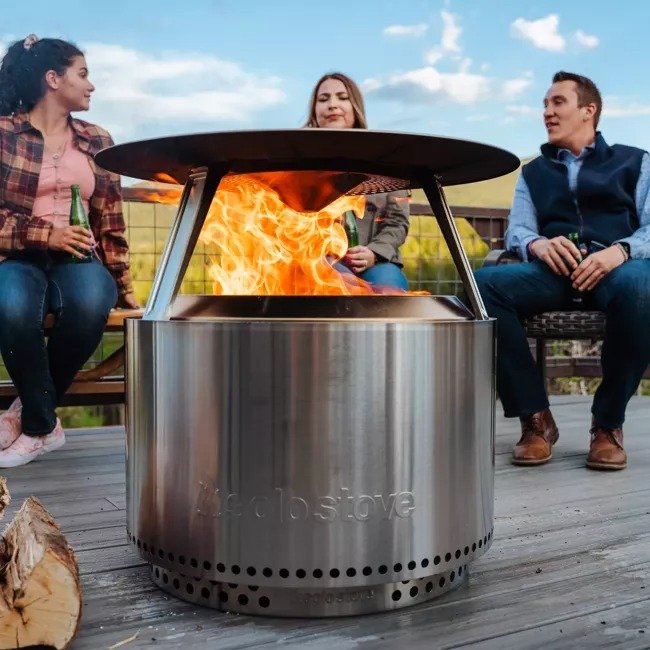 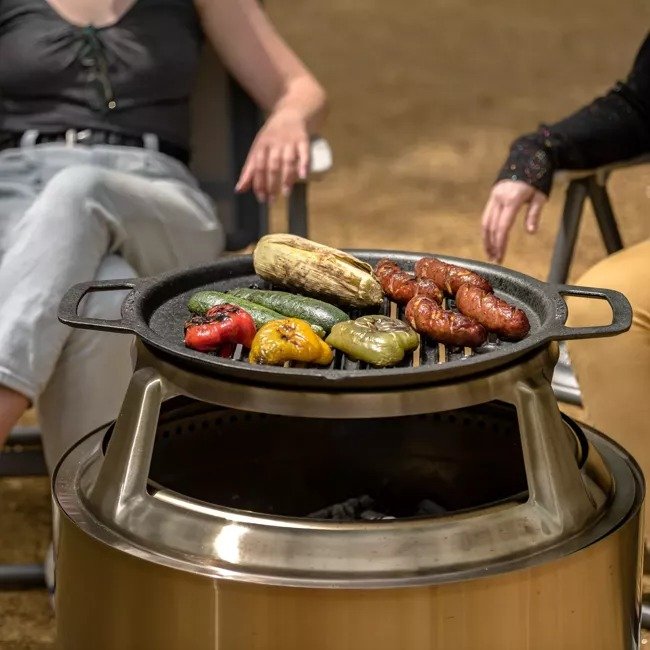 Solo Stove offers a whole slew of accessories for the Yukon 2.0, that will let you maximize your open flame fun. They have added safety with their Shield, a warm night around the fire enhanced by the Heat Deflector or even use the Yukon for a cookout with their Cast Iron Cooktops. To learn more about accessorizing Solo Stoves fire pits, check out their accessory guide.

Specs on the Solo Stove Yukon 2.0 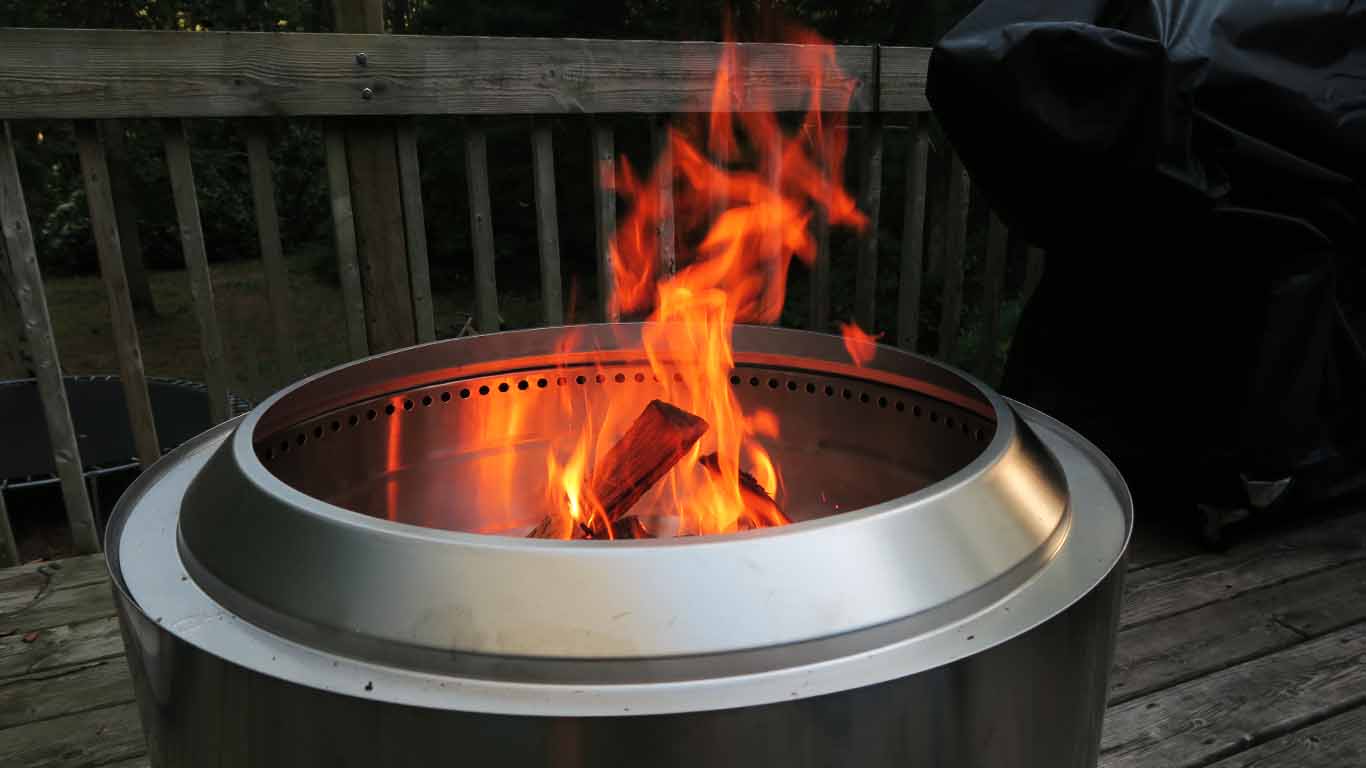 The Solo Stove Yukon 2.0 takes the backyard fire pit to the next level, by removing the smoke. Being able to sit and enjoy a fire without having to get up and move away from the smoke really makes relaxing around the fire infinitely more enjoyable. If you are ready to improve your fireside experience, I highly recommend taking a closer look at any of Solo Stove’s new 2.0 firepits.

For more info on the Yukon 2.0 and other Solo Stove products, visit www.solostove.com.