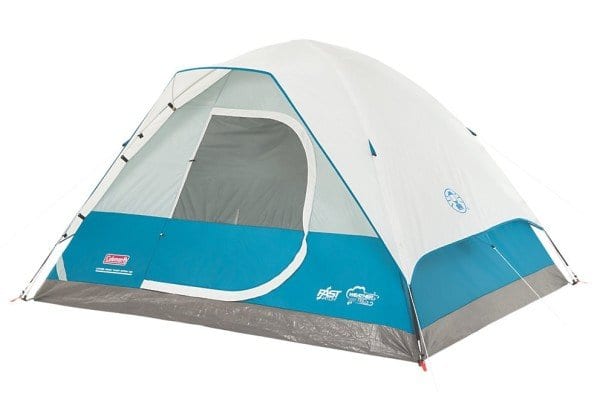 Coleman, long a staple in the outdoor community, adds yet another tent to their storied lineup with the Coleman Longs Peak Fast Pitch 4. Designed for car campers and family excursions, the Coleman Longs Peak Fast Pitch 4 promises to set up quickly and easily, allowing you more time to enjoy gathering fire wood, or chasing your children away from the edge of a perilous cliff – ahem – I mean, allowing you more time to truly enjoy your family camping experience. Coleman markets it as a basic, no frills traditional one room tent – it includes only what you really need, and cuts out all the extras you don’t. 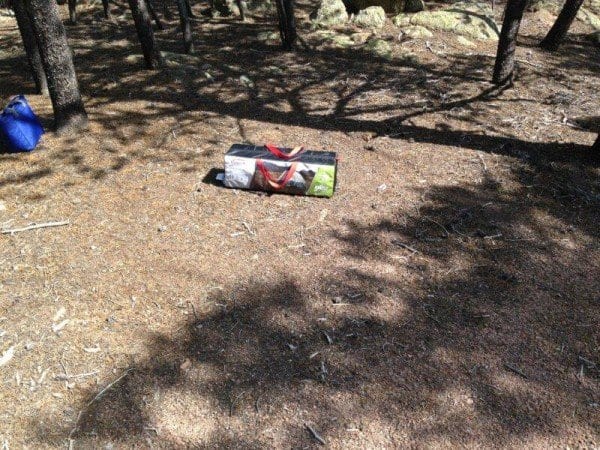 Ready to set up at the campsite – easy enough to throw in the car in it’s included carry sack.

I was really pleased to be testing the Coleman Longs Peak Fast Pitch 4, as it’s been years since I’d been out in a Coleman tent. My first go round with Coleman dates back to family excursions as a kid – and that Coleman tent was a heavy juggernaut of a six person tent. I remember it being confusing to set up, even more confusing to take down, and pretty much just a job for dad to do while we played with the fire and burned our marshmallows. Come to think of it – while the Coleman product has changed, not much about family camping has.

The Coleman Longs Peak Fast Pitch 4 comes with everything you need in one bag – no need to go out and buy an additional footprint, rain fly, pack attachment, etc. It’s truly all in the bag, from stakes to rainfly. Inside the bag, you’ll even find a set of handy instructions (which I promptly ignored – hey, it’s a tent) but in retrospect ARE pretty handy if you’ve never set up a tent before. 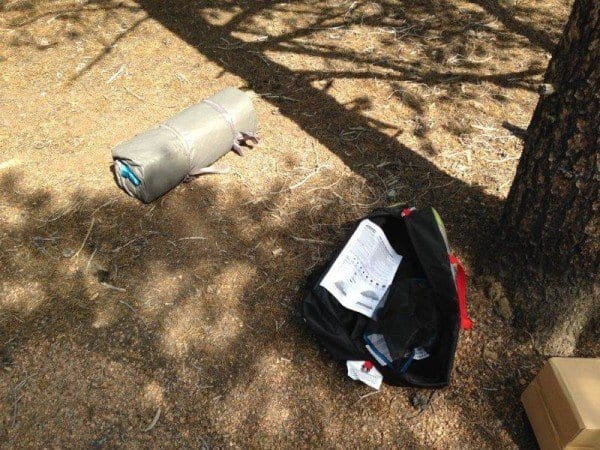 Everything you need, all in one bag… including instructions.

Our testing phase consisted of a couple of weekend long car camping adventures in which we encountered only the lightest of rain, some medium speed wind gusts, and basically just awesome Colorado camping weather. Bad for testing the Coleman Longs Peak Fast Pitch 4, but extremely enjoyable for us. As noted above, both excursions were full family affairs in which we brought along our two wrecking balls (read: sons) aged 5 and 3. This is the first reason I truly appreciated the construction of the Coleman Longs Peak Fast Pitch 4 – it was a cinch to set up and take down on both outings, and provided me the ability to set up the tent while keeping an eye on the kiddos – and if you have young spawn, you know that they usually require as many eyes on them as possible to keep them from pushing their brother into the fire pit (unlit, but still messy) or from chasing imaginary bears… with a camp ax. 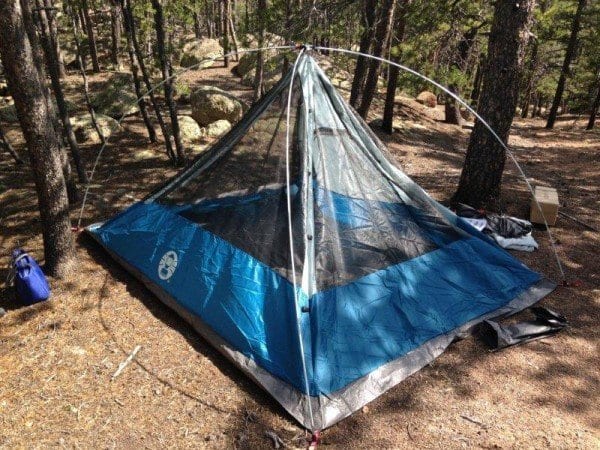 Set up was pretty much as easy as unrolling the tent and clipping it up to the polls.

The layout is pretty much standard affair for most tents – the rectangular shape maximizes space inside, and is easy to roll out and stake down. The tents “poles” are bungied together within the roll of tent itself, and only allow for one way to piece together. Really, the only part where you could go wrong is the orientation of the poles to the tent itself – most tents come with a “color coded” pole end to show you where to orient the poles onto the tent grommet/stake point. I looked at all four tent pole bottoms and couldn’t puzzle it out until my buddy pointed out that the actual pole connector (up top when the tent is set up, see the photo below) is what has the color “code” on it – this corresponds to one of the stake points. Not immediately obvious, but not super confusing either. Once this is established, the tent alone takes another 2 minutes and 45 seconds to put up with a beer in one hand. There are a  series of clips which attach to the poles, making it easy for you to walk around and “clip” the tent to the poles. I’ve always been a fan of this type of construction – although, it does leave you somewhat up a creek if one of the clips break. 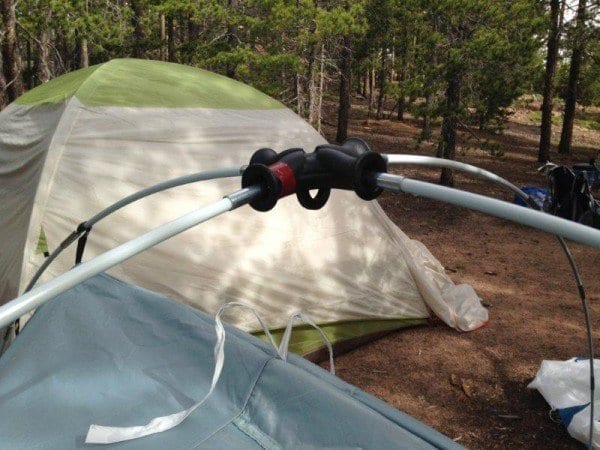 The rainfly was also fairly straight forward, as it (much like the tent poles on the Coleman Longs Peak Fast Pitch 4) only orients itself in the one direction. There is only the single door on the tent (two doors would have been nice, but remember the part where I said no frills?), so when looking at the rainfly, you could see the cutout designed to hang over the door. There is an extra tent pole which goes through a sleeve along the outer edge of the rainfly – this is also easily distinguished, as it’s the only pole which is separate from the others. The resulting “eave” that it creates really is only for looks – it’s not wide enough to keep rain from coming in the tent when you open the only tent flap – but it does make for really easy access into and out of the tent when the rainfly is on, which is a HUGE bonus with young children around. 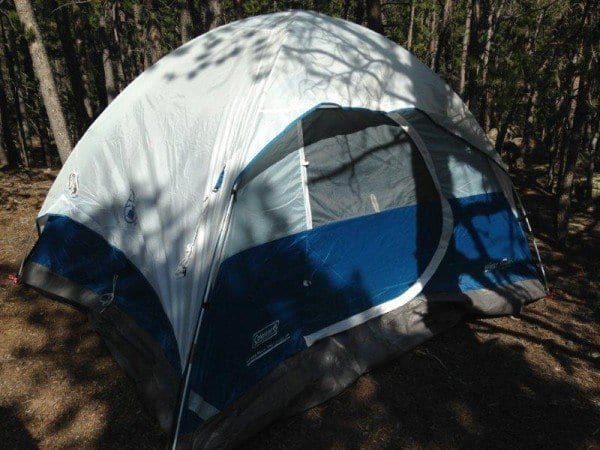 The included rain fly is easy to get on, too. Not really wide enough for protect you if you open the front in a downpour.

Rounding out the setup of the tent and rainfly is a series of guy lines attached to the outer corners of the fly – the only anchor points for the tent itself are at the four corners. I prefer some attachment points on the “sides” of the rectangle itself, but for the winds we experienced, it didn’t seem to make much difference. Really, the only thing I could see here is that if you wanted to use the tent without the fly it wouldn’t have any guy lines holding it solid. The guy lines which are attached to the rain fly are straightforward as well; as a bonus, they are already tied for you. All you need to do is stake them out, pull them taught, and you are good to go. This led to my only real beef about the tent – once the rain fly is staked tight, the poles bend in weird angles. It turns out that even though it’s specifically made for car camping, the poles are so lightweight that they don’t support a whole lot of weight from the fly. When the fly is loosened so that the poles don’t bend under the stress, the fly flaps around in the wind. This would become a problem in a heavy rain, as the ability to stay dry inside the tent depends on the tautness of the rainfly – this is yet another “pro-tip” I learned the hard way – keep your rain fly taut. 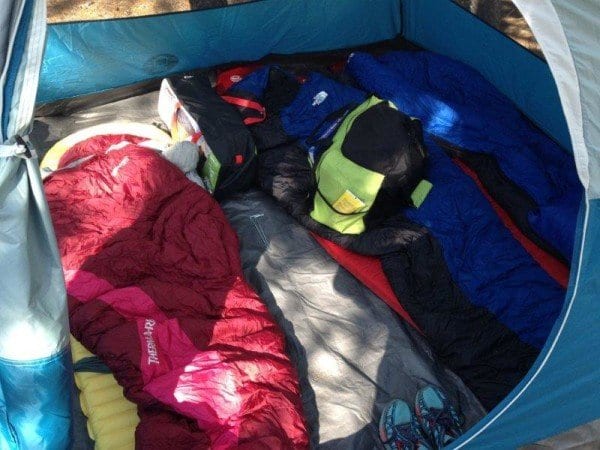 Pretty roomy on the inside.

The inside of the Coleman Longs Peak Fast Pitch 4 was fairly roomy for a four person tent – I’d say a bit large, even. The height wasn’t enough for me to stand up comfortable inside, but it also wasn’t really designed for this. There’s a tradeoff here – a lower tent is easier to set up, which I prefer, as I don’t tend to spend a lot of time standing inside my tent. Where it was large was floor space – we comfortably fit four adult sized sleeping pads, and had room for a couple of packs, childs toys, water bottles, shoes – you name it. I would say that you could probably even fit a medium sized dog inside should you want (we don’t have a dog). There are also two hang bags at the corners for small stuff, and another hang bag up top which detaches as needed. As mentioned above, the poles weren’t super strong, so I wouldn’t recommend putting anything really heavy in the top most mesh bag – but it did work for my car keys, glasses, and pocket knife which I wanted to keep out of the hands of the two crazies.

In conclusion, car camping families of four need look no further for a dependable tent than the Coleman Longs Peak Fast Pitch 4. It’s got all the features you need wrapped in easy to carry bag, and lives up to the advertised “fast pitch” name – this is crucial in any family camping endeavor. Even if you have children which aren’t inclined to climb to the very top of a 50 + foot tall pine tree.