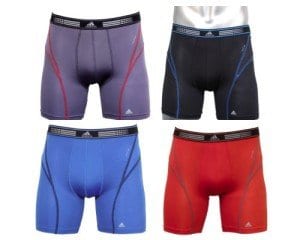 While involved in almost any activity, us guys often sweat and heat up.  For years, we have worn shirts and shorts with moisture wicking material while wearing boxers, boxer briefs, or tighty whities that are made out of cotton.  In the last couple of years, moisture wicking underwear has really started to gain some traction as it is nice to be able to stay cool and dry in places that tend to get hot and sweaty.

I have been testing the adidas Sport Performance Boxer Briefs in a number of activities including hiking, running, and going to the gym.  The adidas Sport Performance Boxer Briefs are made from the CLIMALITE and CLIMACOOL fabric that is lightweight and helps wick away moisture from your skin and body.  While testing out these boxer briefs, I found myself  staying nice and cool compared to using a traditional cotton boxer brief.  In extreme hot summer temps which I have not tested these boxer briefs in, I assume you will heat up no matter what.

The fit of the adidas Sport Performance Boxer Brief is snug, similar to the feel of spandex but with a little less stretch.  The seams of this boxer brief are flat locked, so they won’t rub against your thigh and make you uncomfortable.  There is one seem that goes up the center of the crotch on the outside which had me worried as I did not want a seam hitting me in the wrong place.  On the inside, there is an additional layer of mesh that removes the possibility of this seem rubbing you wrong.  For added comfort, there are no tags in the adidas Sport Performance Boxer.