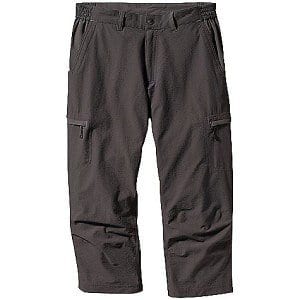 A few months ago, I decided that I would test my manhood and try out a pair of Patagonia man-pri’s.  Now I understand that capri’s are generally for women, but from time to time I would see men wearing these pants/shorts combo and I wanted to see what it was all about. When I first used my new capri’s, I went on a two week honeymoon adventure on the west coast going from San Francisco down to Big Sur and back up to Seattle.  Along the way, my new wife and I made a number of stops for adventures as we are both in love with the outdoors.

The temperatures along the west coast stay pretty cool in the summer, so I often needed both pants and shorts in the same day. Lucky for me, I brought along my Patagonia capri’s.  Now I must admit, I was a little skeptical the first 5 minutes I wore them.  I thought to myself, what are people going to think of me?  And once those 5 minutes were over, I decided not to care and carry on with my own style.

I took the capri’s out hiking, sea kayaking, boating, backpacking, and found them to be a great addition to my wardrobe.  What I like about capri’s is that I am often very warm blooded, so having some sort of ventilation is nice.  It seems like 6 inches from your shins to your ankles wouldn’t vent much, but it was just the trick.  They also do seem to do the trick in colder weather they offer just enough protection in most scenarios for spring and fall days.  I would say the perfect weather for man pri’s is in the temperature range of 40-75 F

Now I must admit, not all men should wear capri’s.  Some men just look pretty bad in capri’s.  In my mind, if you are more the slender and athletic, you are good to go.  If you are overweight or “husky”, I advise you consult with your significant other.  There are also places that are safe and not so safe to wear man pri’s.  I suggest not wearing them to the local boot scootin country bar.  Places around the country with a high outdoors population, you tend to be safe.  Places include; Colorado, Washington, Northern California, New Hampshire, and maybe a few others.  Other places around the U.S. might not be so safe, but I say go for it anyways!

The man pri’s I tested were the Patagonia Nomader Messenger Shorts(Do you notice, even Patagonia calls them shorts so guys don’t get scared??), but they are not listed on Patagonia’s website as they are out of stock for the rest of the season.  If you look elsewhere on the web, you should be able to find them though.

If you have an opinion on man pri’s, we would love to hear your thoughts!