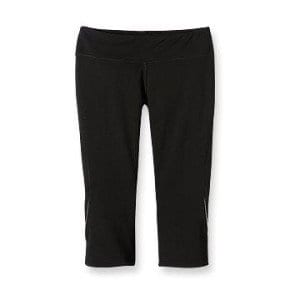 With the changing of seasons comes changing and unpredictable weather patterns; a time when you need versatile gear. As odd as it sounds, capris are an example of versatile gear as they keep your knees and quads covered during moderate temperatures and prevent overheating by letting your lower legs air out. New for Fall 2011, are the Speedwork Capris by Patagonia. As an avid capri wearer for much of my trail and road running, I have put the Speedwork’s to the test while running in drizzle up in the high country of Colorado and the windy Front Range.

The Speedwork’s are comprised of a nylon-polyester-and spandex blend. The combo works well to provide a stretchy and comfortable against the skin fabric that helps resist some of the elements, including the wind and the rain, while moving with you. The Speedwork also incorporates Gladiodor® odor control within the garment to prevent the stank that sometimes comes with technical fabrics and high intensity exercise. I typically was my garments in a tech specific wash every few months and that seems to help things smelling fresh. In a few months I hope to be able to speak more of the Gladiodor’s performance.

The pros of these capris includes the reflective logo over your right hip in the rear and reflective piping down the outside of each leg. In addition, the flat wide waist band is a big bonus, it doesn’t budge when wearing a hip-belt from a pack or a hydration belt. The draw cord is internal as well, to help keep the capris more streamlined in appearance. The capris also run true to size and don’t sag or stretch out when being worn for a few hours or when getting wet with the elements.

Despite the many pros of these capris, I would recommend the following changes. First off, I would love to see an added panel in the crotch, rather than the center seam that goes through the middle section. Most capris include this panel to add comfort in that region and avoid any annoying seams. Also, the internal key pocket is great because you don’t feel your key moving around as you run, yet the location over your hip can be kind of annoying and poke you in the hip. I sometimes throw my house key and gym pass in this pocket and would like to see it perhaps moved to the rear, just below the waistband, where it is out of the way from your stride.

Check out the Speedwork Capri and other great products at Patagonia.com