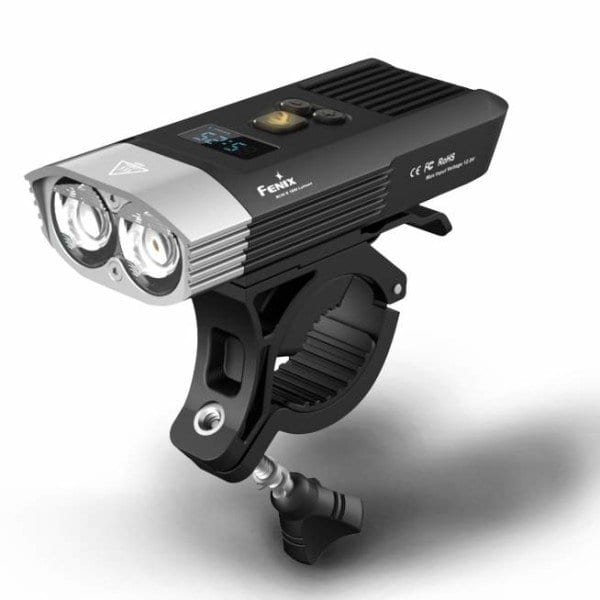 Upon receiving my Fenix BC30R, the need for light, well, it wasn’t really needed. Mid-summer, and even my early morning group rides that leave around 5:30 weren’t really dark enough to warrant a light. As the summer has come to end, and the days are becoming shorter, the need for a light is definitely there, and the BC30R is a welcome addition to my lighting arsenal. I do have a handful of red rear flashing lights, several headlamps, and a couple of simple handle bar mounted lights. From my initial view of this light, the Fenix BC30R just elevated my ability to see and be seen. 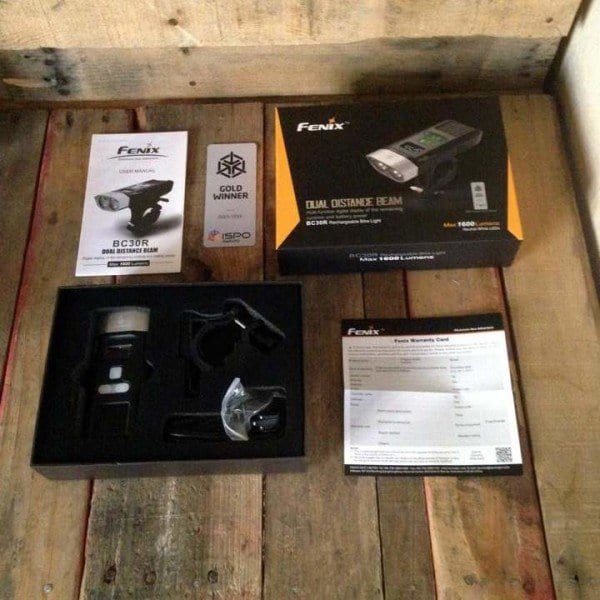 Out of the box. A solid presentation with lots of instructions.

If you are new to this debate, I did want to provide a few basic about the Lumens vs. Wattage angle. New legislature has been slowly making its way into the mainstream for the past 3-5 years, and Lumens are now the new way you will be looking for lightbulbs as well as your bike lights. Watts merely showed us the amount of energy they consume, and not the amount of light actually provided. Lumens measure how much light you are getting from a bulb, flashlight, or bike light. The higher the Lumen number, the more and brighter light you are getting from a bulb. To put it into perspective a 75 Watt bulb used to be about 830 Lumens.

The built-in rechargeable battery comes with Micro-USB charging. It this pack happens to conk out on you, the 1 year warranty will provide you with a new one. After that, a new pack would probably have to be purchased. I really can’t speak to the longevity of the bike light and pack as I’ve been testing for a couple months or so. 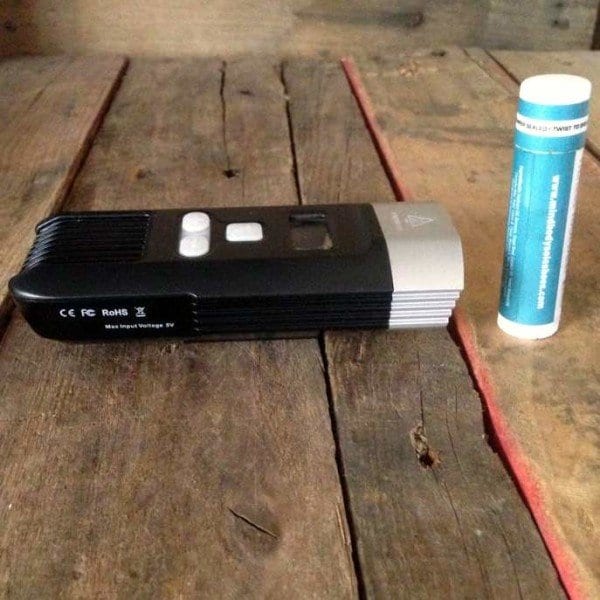 A simple yet sturdy design in a nice compact package. 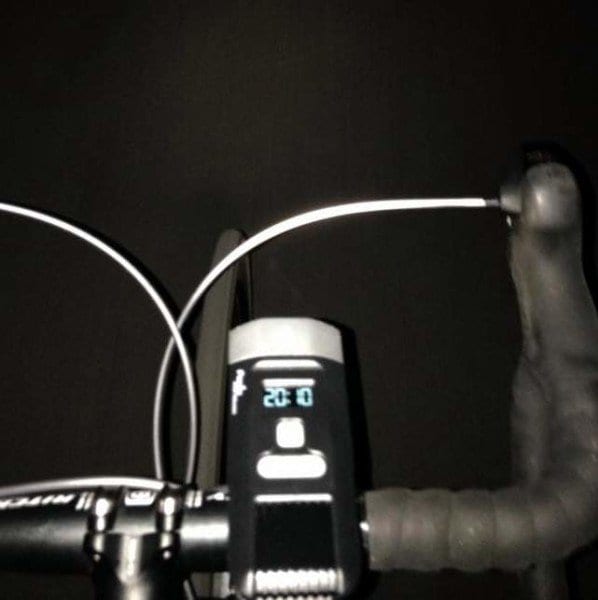 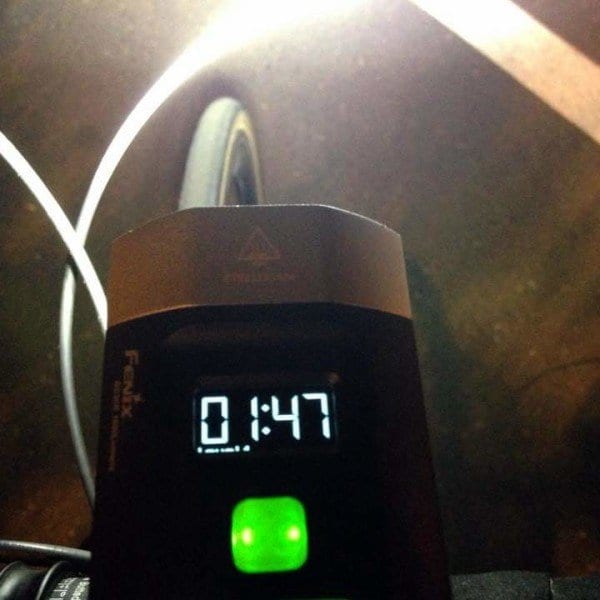 Strongest level provides 800 lumens, but only a couple hours of light.

What’s Included With Your Light

Now that we are well into the fall months, the Fenix BC30R has been seeing some serious action. Now my twice a week morning group rides are being nicely illuminated. I usually keep it on the lowest setting as the street lights, and the comfort and safety of the group with 50-60 riders keeps everyone safe and visible. Where I have really appreciated this rechargeable light is on my solo morning and evening commutes. The safety of a nearly blinding light definitely has every driver out there noticing my fast moving bicycle. Many drivers are still sleeping or with nosed buried in their coffees to notice, so I have to be quite alert. The light beam is strong and can be seen for hundreds of feet giving everyone ample time to react and take notice.

Night Mountain biking is one of the coolest things out there. You do have to have certain comfort level, but if you avoid the crazy technical stuff, the focus needed actually makes you a better cyclist, in my opinion. A single beam illuminates the trail, and that little section of visibility is all you need. There are no distractions from anything outside of that visual periphery. I did double up on lighting and put a headlamp on as well, just to capture those blind spots that can be created when hitting some switchbacks are small dips or jumps.

One really awesome ride where the various light settings came in quite well was a 20+ member group ride into the foothills of Colorado. We left at 5:00 pm to catch a surreal sunset near Golden Gate Canyon State park. That coupled with the Aspens popping some intense colors made the hills come alive. Darkness set in, and this is where I worked the various settings depending on the terrain and how close we all were. We did some gravel grinding on dirt and logging roads which made for some exhilarating descents. This is when I went to the high beam setting (#1) which only gives you about an hour and half of light, but spotting ruts, bumps, and rocks was critical. When the slope would ease up or we made it back on the Tarmac, I could easily switch to the lower light settings. Plenty of light and a huge battery savings. Our 65 mile ride time took well over 4 hours with stops and climbing, but I still had 17 hours of light left on the low setting. Good to know for longer rides or when you need to go on high beam for longer periods of time. 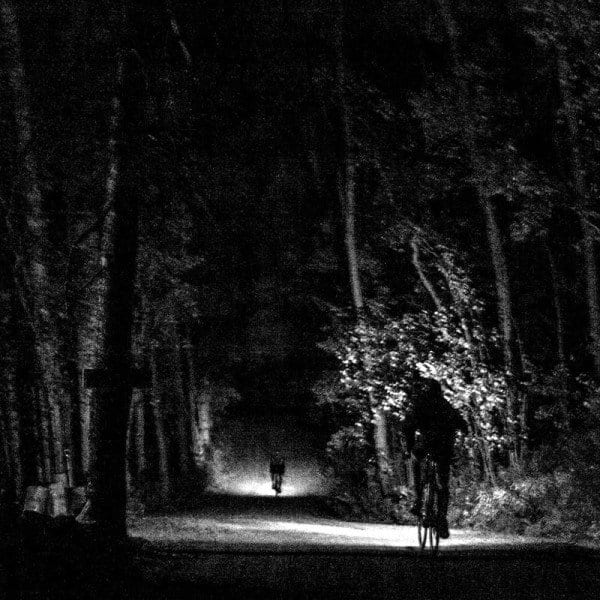 Bombing down a gravely mountain road in pitch blackness. Photo by Natalie Starr

The remote control! I have mixed feelings about this button. Sure, you can strap it right next to your handle bar grips, and flash to alert anyone. It basically goes to a super bright mode when holding the button. Hence, you can either hold it, or flash to make your presence known. On the other hand when riding a bike at night, ‘flashing’ another cyclist with the brights on could lead to some issues, the least of which are some un-saintly words from whomever just got blinded. Actually, after having thought about it for a while, I suppose you could signal oncoming car traffic of your presence. I am glad it is there, but I have only used it a couple of times. Opinions may vary on this, so try it out for yourself.

Fenix has a broad spectrum of lights that include flashlights, headlamps, bike lights, camping lanterns, and underwater flashlights.  This light will provide you with continuous light anywhere from 2:30 to 20 plus hours. After which you will have to plug in the USB Charger cord for a re-charge. No batteries, no direct additional cost buying those toxic little battery bombs. Obviously, the electricity used to charge said device does cost some money, but maybe you can do that at your favorite coffee establishment….?

Even in the world of bike lights, products are recognized as being a star performer, and the Fenix BC30R was recently awarded the ISPO Award as a Gold Winner. 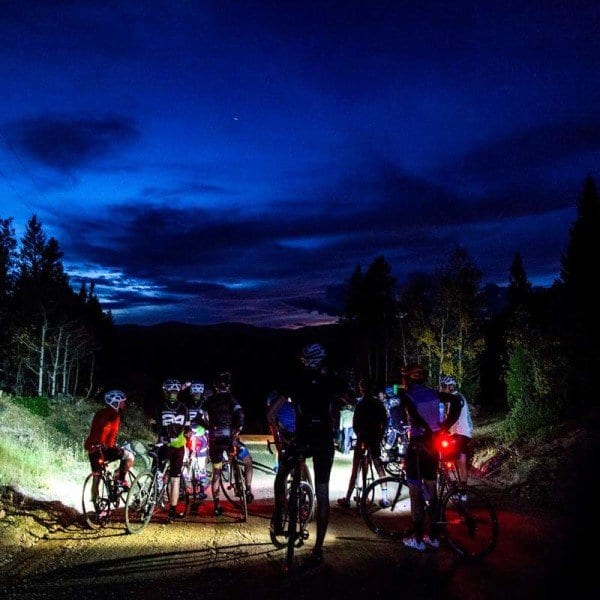 Regrouping as dusk turns to night. Lights are a must and the Fenix made my journey home a safe one. Photo by Natalie Starr

Depending on which bike tribe you subscribe to, this bike light may be a bit on the heavy side for the roadie. This light has some good heft to it which speaks to the quality and durability. With that comes that little bit of extra weight which is probably not an issue for your daily commuter, but the racing enthusiast out on an early morning ride is always looking to shave a few extra ounces. I suppose I fall somewhere in the middle, so don’t really mind its added weight, but do appreciate the durability. And hey, if it saves me from a close call with a motor vehicle, it really doesn’t matter much at all.

For more information on the wide variety of Fenix products please visit: www.fenix-store.com