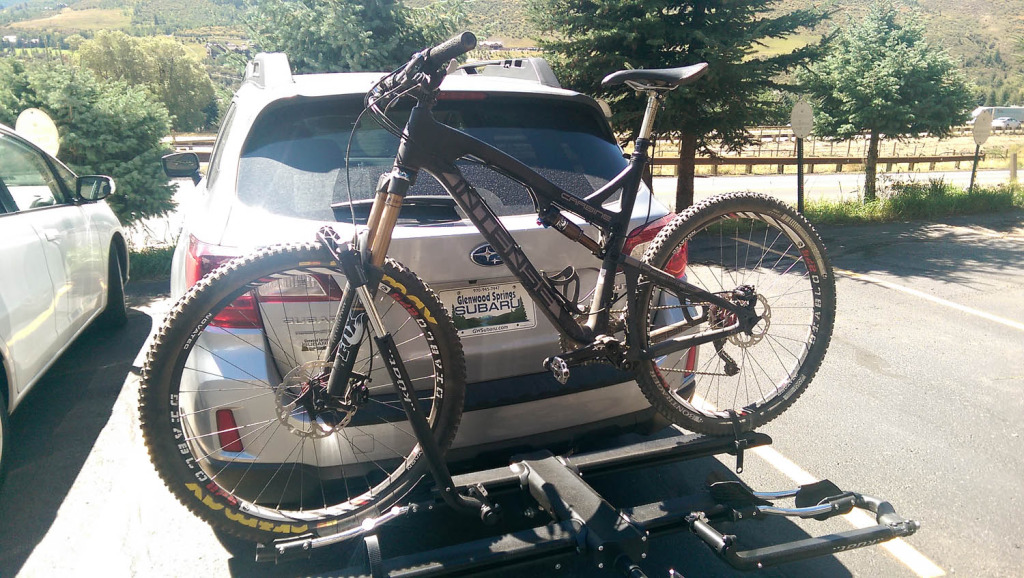 Prior to 2005, when Küat was founded, most bike racks were clunky, utilitarian pieces of equipment that merely got the job done.  The company’s founder was frustrated by this and decided to begin working on a better way to transport bikes on a car.  Fast forward to 2014 and their latest hitch mount bike rack, the Küat NV, and I can confidently say they succeeded by making one of the best options on the market.  The NV is a two bike, hitch mount rack that manages to be excellent at it’s core function of holding a bike while being attractive and offering some great bonus features.  Read below for my Küat NV Review.

Starting at the beginning, you should know that the Kuat NV rack requires some assembly when you get it home. In order to keep shipping costs reasonable, the rack is partly assembled and then arranged in a box in a nice game of Tetris.  The box includes everything you need for assembly so you don’t have to scramble for any tools.  The assembly is very straight forward and the directions are clear and easy to follow with color pictures.  I’d say pretty much anyone could put the Kuat NV together without any mechanical knowledge.  It took me about 40 minutes to get it all together by myself and I think that time could be cut in half if you have a partner. 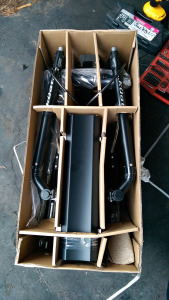 The Kuat NV comes partially assembled and stuffed neatly into the box. 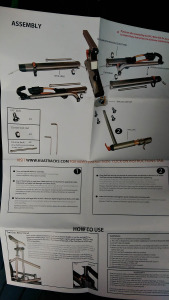 Clear, color directions show you how to complete the final assembly. 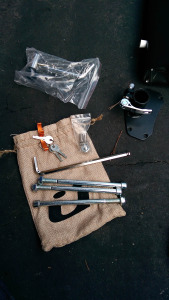 All of the hardware and tools needed for assembly are included. Here you can also see the nice bottle opener keychain Kuat throws in with the included keys.

Once assembled, the Kuat NV rack easily slips into your car’s trailer hitch like anything else.  However, it has a great feature that separates it from the competition.  Once inserted into the hitch and the included locking hitch pin is installed, you use a spinning knob at the end of the rack attachment to secure it in the hitch by tightening it.  This keeps the rack solidly in place and not rattling around. 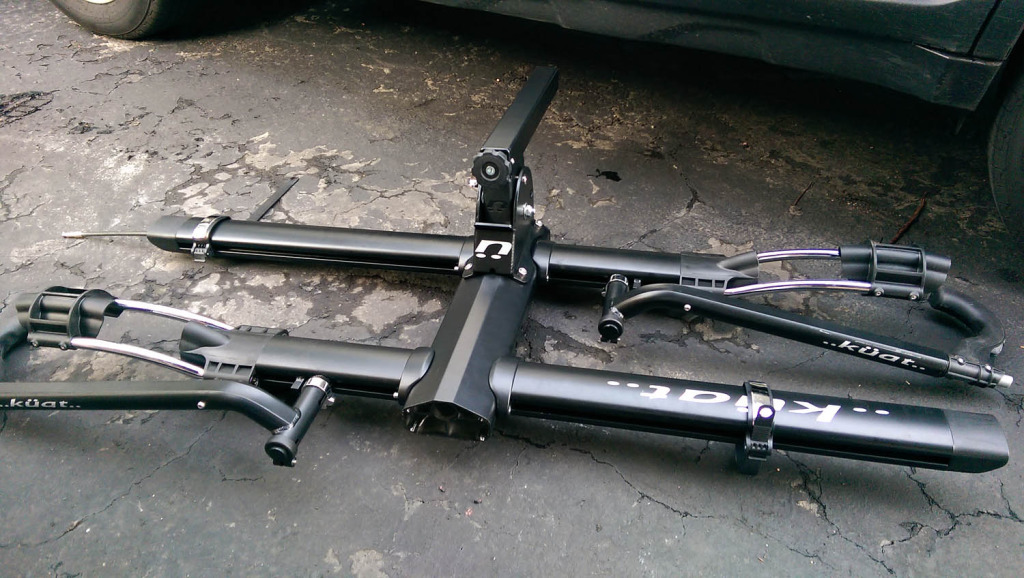 The assembled rack upside down and ready to be installed. 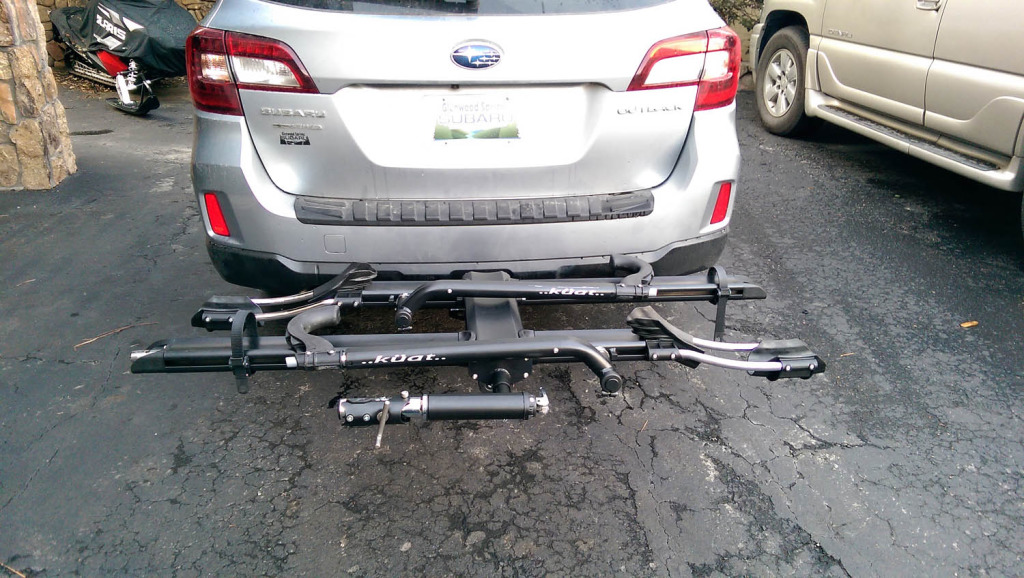 The rack is quite sleek and matches a lot of new cars nicely when compared to most bike racks. 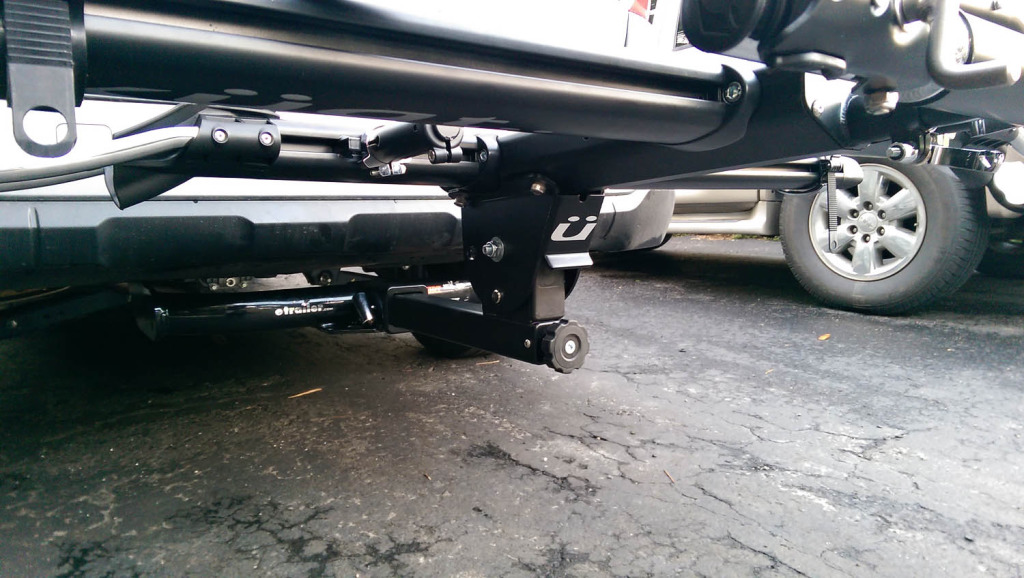 This spinning knob tightens the rack inside the hitch.

Kuat took the time to think about the best ways to attach a bike to a rack and it shows.  This style of rack has the advantage of only contacting your precious bikes on the rubber of the tires and not clamping onto any metal or carbon.  The NV accommodates almost every bike on the market with the ability to accept 20″-29″ wheels (with up to a 4″ tire) and up to a 48″ wheelbase.  I tested it with a beach cruiser, a 27.5″ mountain bike, a 29″ mountain bike, and a traditional steel road bike and they all fit securely.  Loading a bike on the Kuat NV rack is simple and fast.  Slide the rear tire strap to the approximate location of the center of the wheel, fit the front tire into the wheel well, pull out and tighten down the front ratchet arm on the tire near the fork, and secure the rear tire strap.  One of the design elements that adds to a clean look is that the front ratchet arm slides inside the housing instead of having a long bar that is slides along, which would leave the top awkwardly exposed.  A key feature of the ratchet is the very small travel between tightening ‘clicks’.  This allows you to get a very precise and secure fit regardless of wheel size.  Loading two large mountain bikes on a hitch rack is always challenging but Kuat did it’s best to leave a best-in-class (according to them) 13″ between bikes, which makes things a bit easier.  To push it to the limits, I loaded two enduro-style all mountain bikes with super wide handle bars and was able to get them on there with just a little adjustment of the seat posts.  If you don’t have dropper seat posts, the easiest thing to do would be to just pull the seatposts out entirely.  Unlike non-platform style bike racks, I felt quite safe with my expensive bikes on this rack and didn’t worry about them getting damaged from banging into each other.  Throughout the course of my Kuat NV review, I’ve transported bikes hundreds of miles on highways and dirt roads and they’ve always arrived safe and sound. 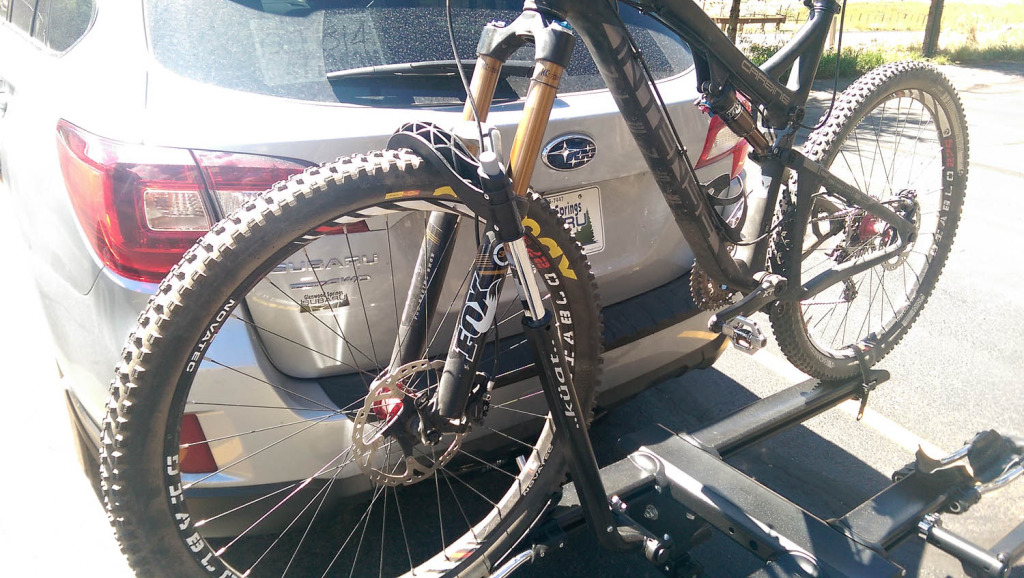 The arm ratchets down onto the tire near the fork. 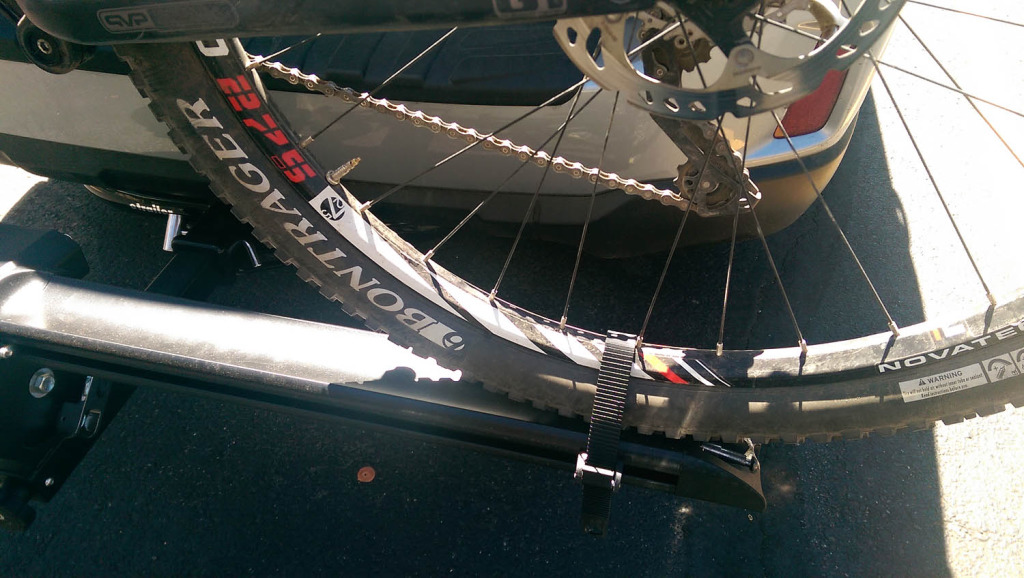 The rear tire clip slides along the track to accommodate different wheelbases. I do with that there was a ratchet to help tighten this. 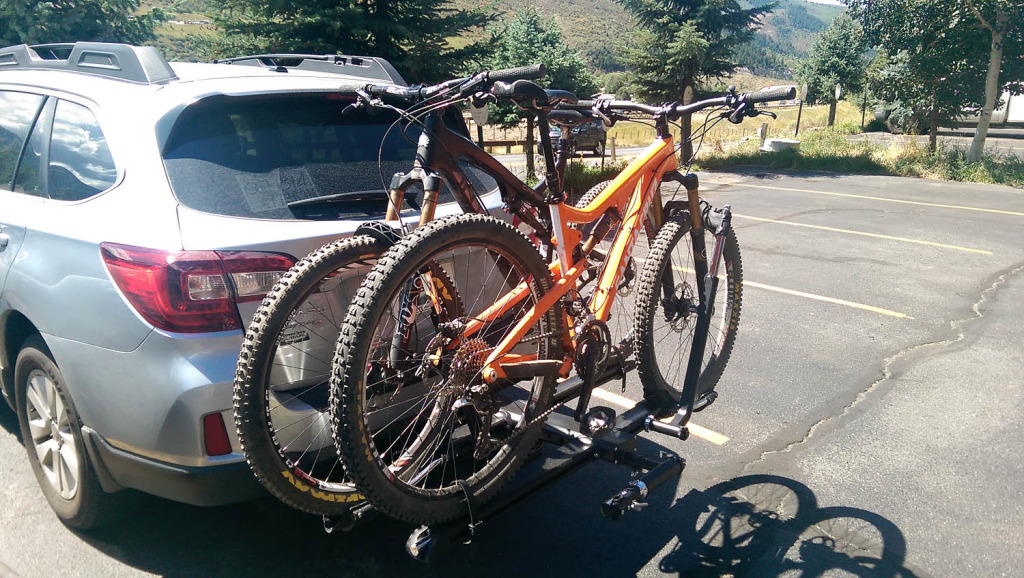 Two large enduro style bikes can be held on the Kuat NV without problems. 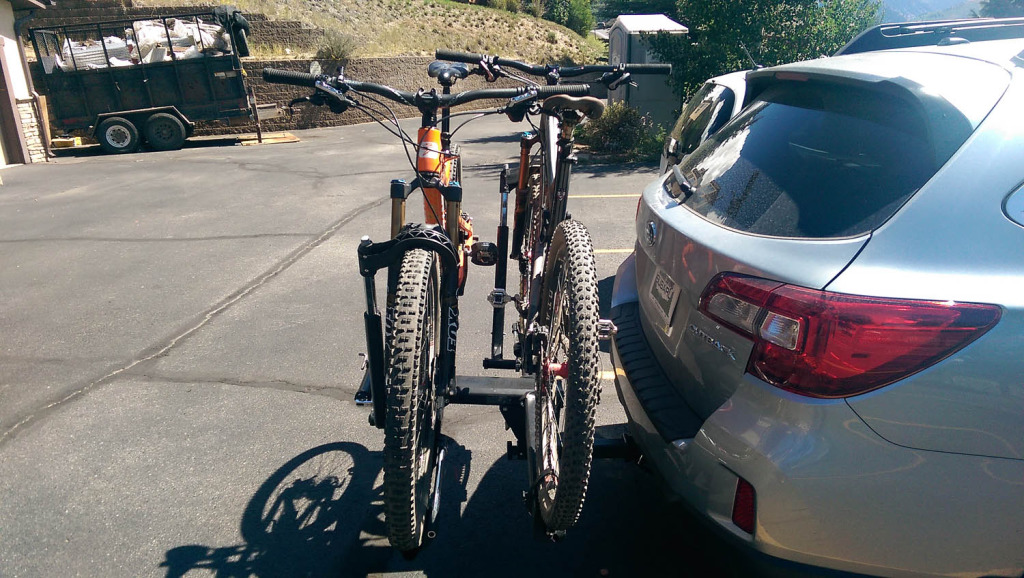 Plenty of distance between the two bikes to ensure that pedals and drive trains don’t hit each other. 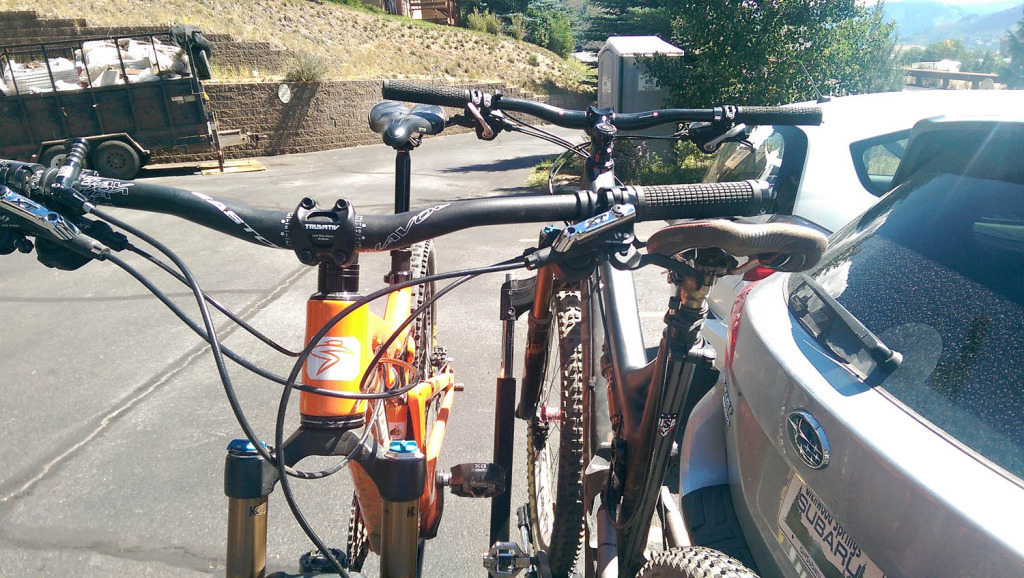 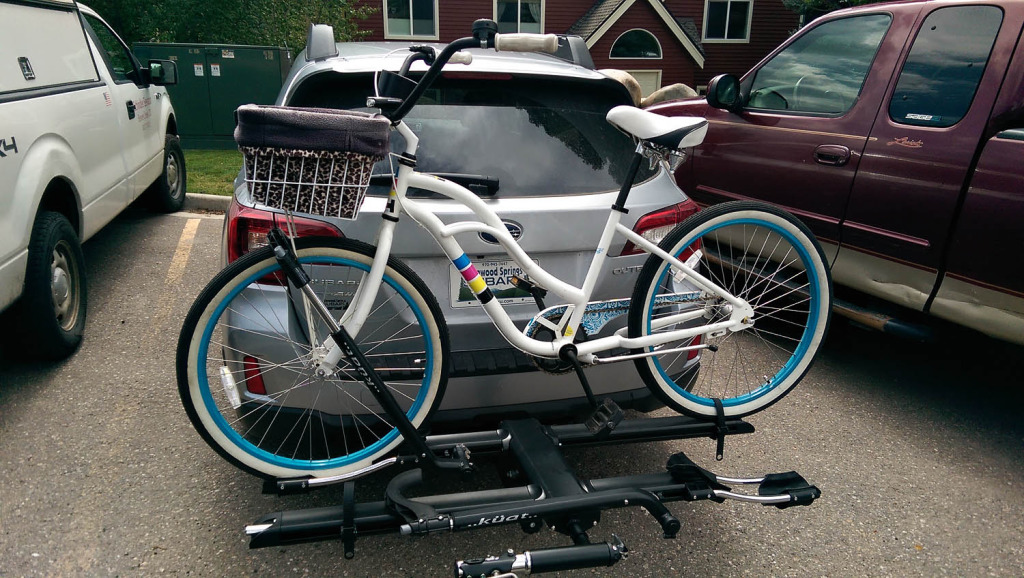 The Kuat NV rack can accommodate all kinds of bikes including this beautiful cruiser.

Attention to detail and thoughtful features are what set the Kuat NV rack apart.  On a hatch/trunk mounted rack, the weight of the rack and bikes makes it impossible to access your gear without removing everything.  One of the big advantages of a hitch mounted rack is that you can still open your hatch by tilting down the rack out of the way.  The NV has a nice, large lever at the base that lets you quickly accomplish this task and have full access to your trunk with two bikes still loaded on the rack.  This same lever also allows you to quickly tilt up the the empty rack for more compact storage when not in use.  One of the unique features of the Kuat NV is the TRAIL DOC ™ repair stand that makes mechanical repairs and maintenance much easier by lifting your bike off the ground and letting the wheels spin freely.  The TRAIL DOC has a rather ingenious deployment mechanism that utilizes the “stowed” position of the rack for added height.  The repair stand is stored in the base of the rack and is pretty much completely out of the way when not in use.  It takes maybe 2 minutes to get it set up with a couple of quick releases.  The bike clamp can rotate in to multiple positions so that you can use it on any type of bike.  Another great feature of the NV is the built in cable lock system. Like everything on the Kuat NV, thought was given to storage of the lock and when it’s not in use, it stows inside of the rack and magnets keep the ends in place.  The cable extends from the back right and front left of the rack and meets in the middle with a lock.  I would be remiss to not mention that a cable lock is NOT a super secure way of  locking up your bikes because a pair of wire cutters can get through a cable pretty quick.  I strongly recommend the use of a u-lock attached to a permanent structure if you have to leave your bikes for an extended period of time.  That said, I used the NV’s built in cable lock when I was in relatively safe areas or I wasn’t going to be gone for long.  My one complaint is that the cable is just a tad short and is somewhat difficult to use on two large bikes. 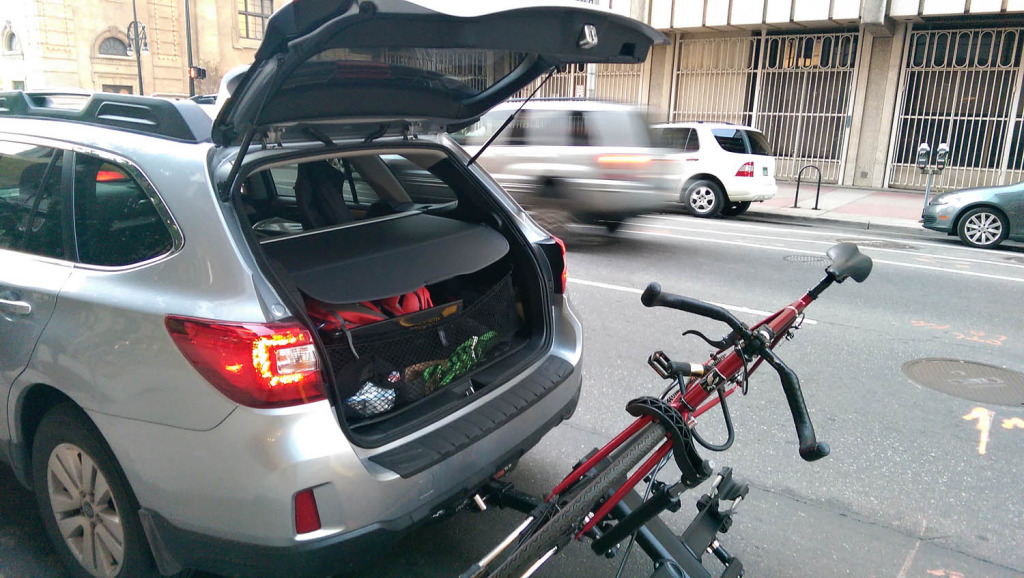 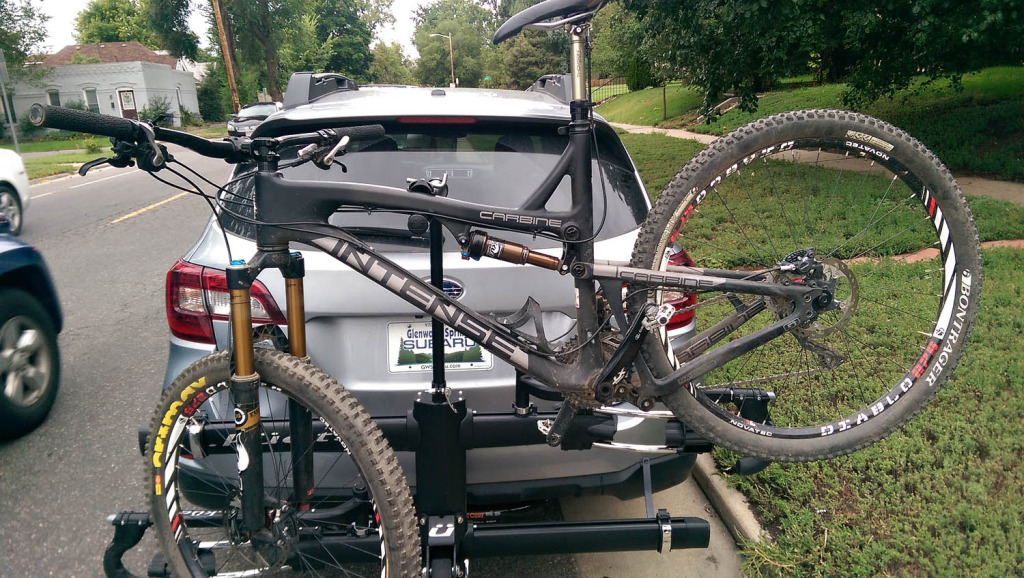 My final verdict on the Kuat NV bike rack is that it truly is one of, if not the best ways to transport a bike on your car.  It looks as slick as any bike rack can while doing a great job at its core function.  The rack offers an easy to use and secure method of attaching your bikes that will keep them damage free and added features make it stand out from the competition.  Thoughtful features and attention to detail, like the hitch mount tightening cam and TRAIL DOC built-in repair stand are useful and well designed.  At $549, the Kuat NV is a significant investment, but it also does the job better than any other option and it is my top choice for a hitch mount bike rack.  If you need to carry four bikes at once, Kuat makes it easy by purchasing the NV Add-on, which adds 2 more bikes when needed.  For more information and purchase please visit www.kuatracks.com