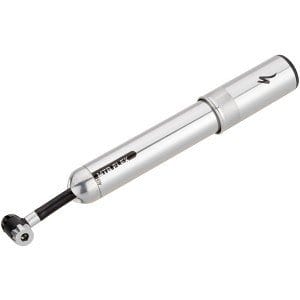 Flats happen. No matter the trail, the tires and tubes, or lack thereof, eventually you will be on the side of the trail fixing a flat tire. It’s at these times that little things matter. The Specialized AirTool MTB Flex pump incorporates a few nice features that can take some of the frustration out of flat tires. Even with the advent of tubeless tires, which I run on my mountain bike, I’ve had more than a few instances that left me putting a tube in along the side of the trail. At these frustrating moments having a pump that works quickly and flawlessly is more than just a convenience, it’s a must. 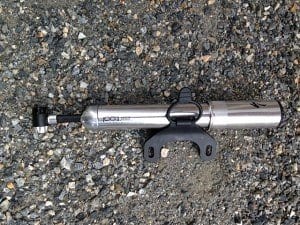 While a bike pump isn’t the most technologically advanced product, the AirTool has some nice features that set it apart. First, it features Twin Head technology so whether you’re using Presta or Schrader valves you’re covered. Additionally, rather than being secured by a lever, the head screws on directly for a secure fit. Second, the retractable flexible hose makes it much easier to pump once you’ve attached the pump head. Last, the double barrel chamber puts more air in per pump, so you’re not winded just from pumping up your tire.

Bad for me in general but good for this review, I had two weekend rides in a row that were interrupted by flat tires. Despite running tubeless technology a slash across my tire left me putting in a tube. Attaching the pump head is made much easier with the flexible hose. Tucked into the pump itself, the hose measures about six inches long and makes it more convenient to attach the head and pump air into the tube. Rather than a lever, the AirTool screws directly onto the valve itself. Compatible with Presta and Schrader valves all you need to do is match the correct side of the head with your type of valve and screw it on. This makes a secure connection ensuring every bit of air goes into the tube. My only concern here is that some Presta valve stems have removable cores. Conceivably, when unscrewing the pump head you could unscrew the core from the stem, letting out all the air. I advise you to make sure your replacement tube is a solid core variety to avoid this potential issue. 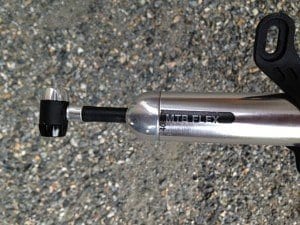 Once secured you can start pumping away. Here again the flexible hose comes into play. You can twist and orient the pump to get into a comfortable position. It’s a good sized pump, one that fits in a hydration bag easily but may be a bit large to throw in a jersey pocket. The double chamber feature puts in a good amount of air per stroke. It’s not the most efficient, but it will get job done in a reasonable time frame. With 29er wheels, it took me a good three to four minutes of pumping to get around 45 psi. That’s quite a bit of pressure for a mountain bike, but when running tubes I tend to add more psi to avoid a pinch flat- especially when I’ve used my last tube.

It’s a pump, I know. But it’s a pump that works well and makes fixing a flat a bit more convenient. The flexible, retracting hose, screw on pump head, twin compatibility and good air chamber make it a product worth throwing in your hydration pack. The Specialized AirTool MTB pump is a product you don’t want to use but will be a handy one to have when you do.