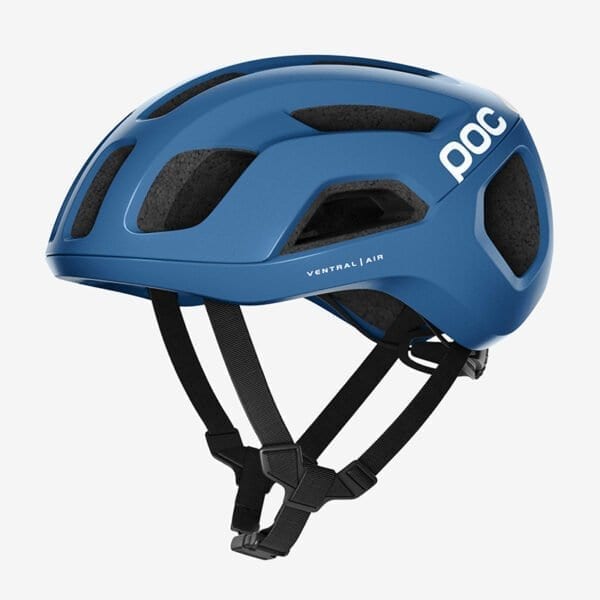 The POC Ventral Air Spin is one of their latest entries into the cycling helmet space. With a focus on ventilation, aerodynamics, and comfort, the Ventral Air Spin attempts to check all the boxes.

POC has been in the helmet game for quite some time and continues evolving their product offering on the cycling side. The Swedish company cut their teeth back in 2005 in the ski industry, but soon expanded into other markets as they started picking up steam, establishing themselves as a leader in the protective-wear market.

My time with the POC Ventral Air Spin was spent on both the road and gravel rides. Seasonal conditions lined up nicely for testing of a helmet that bills ventilation as its number one attribute as the Colorado Front Range was experiencing some mid to upper 90-degree temperatures for most of the testing period. Being a heavy sweater, I was eager to see if I noticed a difference compared to my usual stable of cycling helmets. 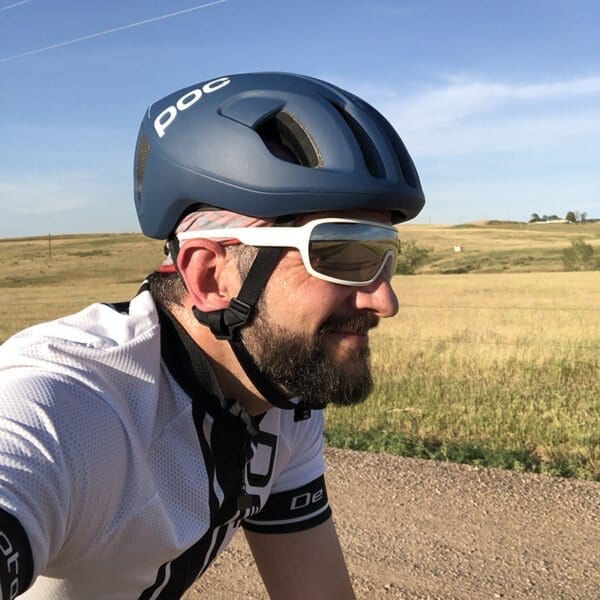 Since POC comes out of the gate hard with ventilation as the hallmark attribute of the Ventral Air Spin, I was pumped to see if real-world testing lived up to all the marketing speak. POC talks at length about the placement and size of ventilation ports and internal channels that work to control airflow over the head as you ride in hot, steamy conditions.

I can attest to the fact that POC got this right. My go-to helmet for the past several years is the Kask Protone, which I find to be my sweet spot in the fit category. The Protone has never felt overly warm to me as I never really considered it on hot days…so no harm, no foul, right? Well, within the first 10 minutes of my first ride with the POC Ventral Air Spin, I immediately felt a pretty hefty airflow increase over the Protone. Basically, I didn’t know what I was missing. 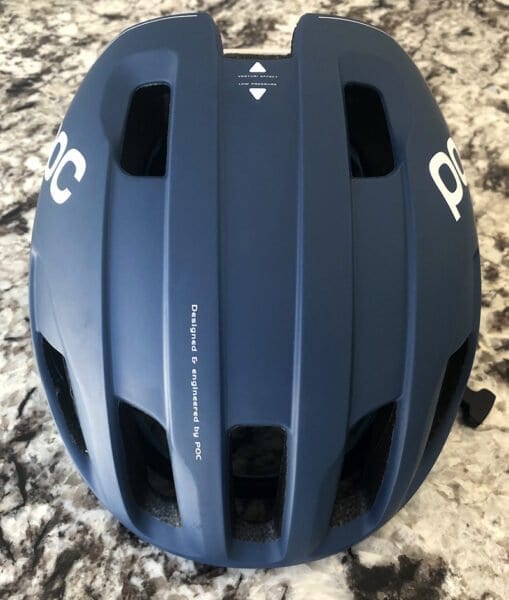 Test conditions on that first ride we reasonably brutal…4 pm on a 93-degree day on a rolling gravel course with some sharp, steep climbs where airflow was minimal on the ups. Not a problem for the Ventral Air Spin. I was noticeably cooler than I normally would be with my go-to lid. So much so that at one point I fiddled with the helmet a bit to make sure it was on correctly and not pushed back, exposing my forehead to the air. Yeah, it was THAT noticeable. For the remainder of that ride, I was very aware of the increased airflow over my noggin, and when I hit some descents it was like someone turned a fan on. Pretty awesome. 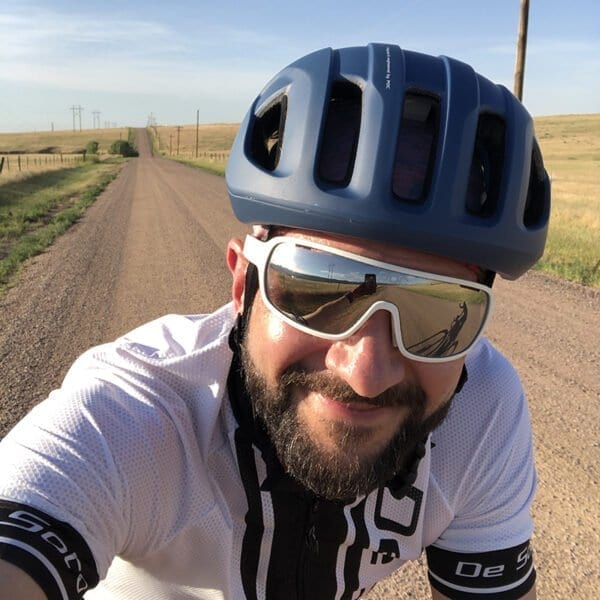 My second ride was on the road bike where I found myself on a sustained, 10-mile mountain road climb. I wanted to see if the ventilation benefit would be there over a sustained 7 – 10 mph climb for an hour or so. Again, temps in the low 90’s, which turned into a bit of a sufferfest…all in the name of thorough testing!

As mentioned earlier, I sweat like a beast…ask anyone. So although there’s nothing that’s going to mitigate that particular trait, the Ventral Air Spin did allow for a bit more relief over my melon than I’m typically used to. At lower speeds, ventilation isn’t as robust, obviously, but there was still a noticeable difference in the amount of sweat that was dripping down my forehead, into my eyes and glasses. Not scientific by any means, but nonetheless, it was real.

Once the road pointed down, the helmet really came into its own. I’d have to say the Ventral Air Spin comes as close to feeling like you’re not wearing protective headwear as any helmet can achieve, at least from a ventilation standpoint. By the time I hit the bottom of the descent, my head was completely dry from the cooling airflow the helmet provided. For me, that’s really saying something, particularly in those conditions. 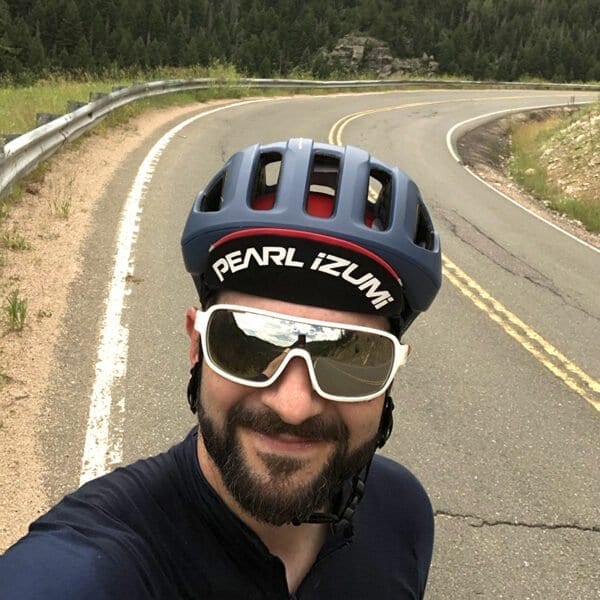 Without doing some wind tunnel testing, or at least more robust real-world testing involving different days with similar testing conditions and multiple helmets, it’s pretty difficult to quantify claims of aerodynamic benefits. Did I notice that I was appreciably faster on my test rides? No, not particularly, but that doesn’t mean there wasn’t a benefit. POC claims that the trailing edge of the helmet helps calm the flow of air as the air passes over and through the helmet. For those of us that grew up in the 1980s and rocked a spoiler on their rig of choice, you know what I’m talking about. 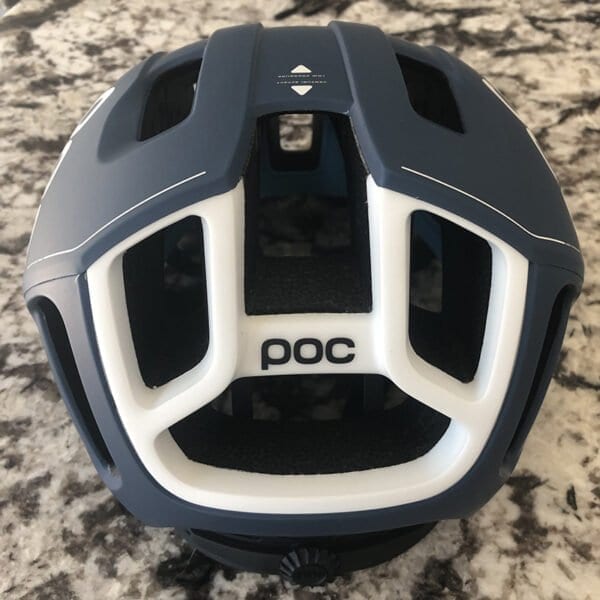 The Ventral Air Spin was developed using CFD (Computational Fluid Dynamics) in an effort to get the best airflow and aerodynamics packed into a lid that’ll keep you cool and calm the flow of air as it leaves the helmet. A lot of companies are employing the use of CFD these days. It’s a great way to test multiple versions of a design without the magnificent expense of building live model after live model and taking them to a wind tunnel. To this end, POC worked hard at helping such a well-ventilated helmet slip through the wind without feeling like you’re wearing a piano on your head (even if it kind of looks like you are…more on that below).

So yeah, did I notice a big increase in how slippery I was through the wind? Not really. But, as an aside, the helmet did create a rather interesting wind sound as I rode, particularly at speeds above 20 mph, so maybe that’s the aerodynamics at work? I’ll let you be the judge.

What good is a well ventilated, aerodynamic helmet if it doesn’t protect you in the event of a crash? Although I can happily say that I wasn’t able to test the crash-worthiness of the POC Ventral Air Spin, I can speak a bit to what POC has baked into this helmet in an effort to keep us all out of the ER.

What does all the mean to you? It means that POC makes protecting your noggin a priority. POC’s mission is pretty simple and straight forward, “POC is a Swedish company with a strong mission to do the best we can to possibly save lives and to reduce the consequences of accidents for gravity sports athletes and cyclists.” I think that boils down to the idea that POC takes protection very seriously with the Ventral Air Spin.

As I’ve stated in several reviews in the past, fit is a highly personal experience. That being said, the Ventral Air Spin and I got along OK together. I mentioned earlier that my go-to helmet is the Kask Protone. Why? Because it fits me like a friggin’ glove. That helmet goes on and then disappears within seconds and I never consider it again until I’m taking it off. I can’t say that was the case with the Ventral Air Spin.

Did it fit poorly? Absolutely not. However, it was a case of fairly regular adjustments to relieve some pressure on the front of my skull. Not really uncommon for me as I apparently have a Neanderthal shaped head. Front forehead discomfort is an issue I’ve faced with helmets from the likes of Giro, Bell, Lazer, etc. POC wasn’t immune to being lumped into that unfortunate category as well. That being said, it was far from the worst offender. I merely found myself shifting the helmet fore and aft every 15 or 20 minutes. Not a huge deal for me, but it did remind me that fit on something like a helmet is wildly personal. For those of you with the gift of an aesthetically pleasing head shape, I’m guessing your experience would be much better.

Forehead discomfort aside, the Ventral Air Spin’s retention system was top notch. The ratchet system was smooth, precise and highly adjustable. And once you cinched it down, the cradle gave my head a lovely little hug that said, “Don’t worry boss, I’ve got this.” Very reassuring. 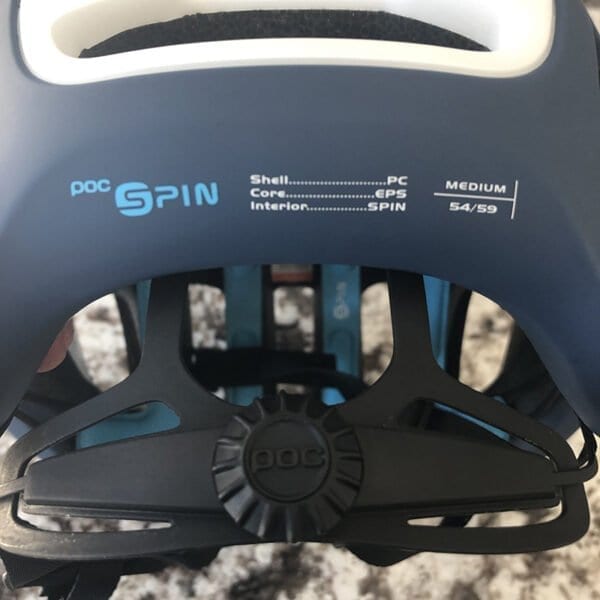 The straps and buckle offer enough adjustment to dial in your desired fit. Regardless if you have Bilbo Baggins ears or a Jay Leno jawline, you shouldn’t have any issue with finding a happy place for the strap and buckle placement. 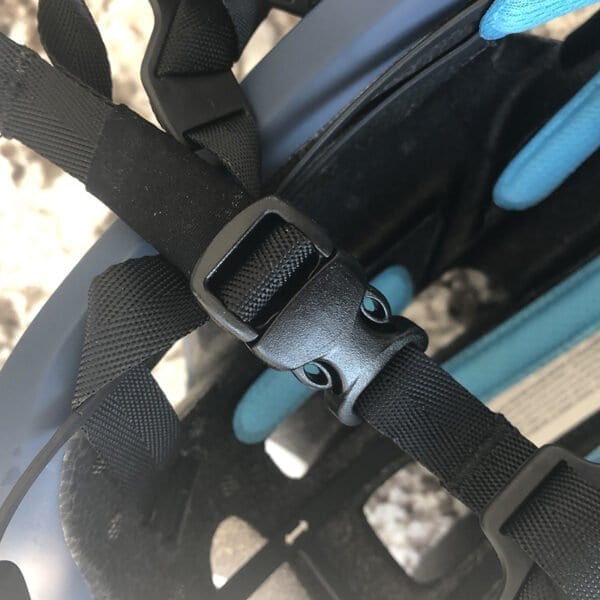 One of the first things I noticed upon unboxing the Ventral Air Spin was the striking level of finish on this helmet. POC really knows how to produce a top-shelf helmet. The Stibium Blue Matte color was flawless and the junctions where the hard exterior shell met the foam protective layer were seamless. Truly one of the most professional finishes I’ve ever seen in a cycling helmet. 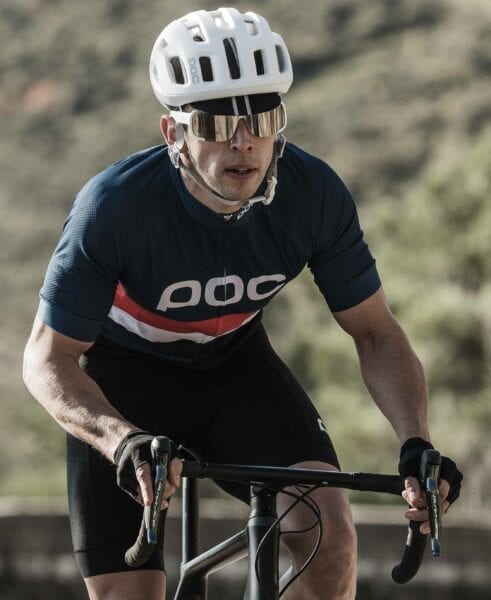 A small, but nifty little feature is the “sunglass garage”. Sunglasses, like POC’s own Eye Dos, fit seamlessly into the front vents for secure storage on and off the bike.

Aesthetically, the helmet is a bit polarizing. If you’re looking for a svelte looking lid, this isn’t it. At least on my head, the Ventral Air Spin has a bit of a lightbulb shape to it. Did it bother me? Definitely not as the benefits heavily outweighed the downsides. However, some people may find the helmet to resemble a garbage can, so buyer beware if you’re into the style side of cycling.

A highly ventilated helmet with a claimed aerodynamic edge that looks like it was produced in a cleanroom.

Barring a small, but rather annoying fit issue, the POC Ventral Air Spin proved to be a welcome companion on some seriously hot rides where airflow was a top priority in keeping me comfortable. The fit and finish are truly top-notch and contribute to an all-around feeling of noggin-superiority when donning the POC.

POC prices the Ventral Air Spin at $250 and can be purchased via their website at pocsports.com.