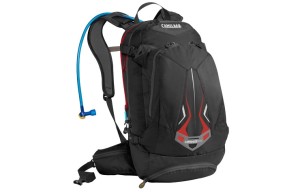 If you’re me and like to go for long mountain bike rides, you need a pack that carries more than just a spare tube and an energy bar. The longer and more remote the ride, the larger the need is to carry more gear and essentials. But you also don’t want to have to switch packs for shorter, close to home rides either. With this in mind, I’ve tested several “mid- to large-sized” hydration packs in the past couple of months. The CamelBak H.A.W.G. NV hydration pack is the largest mountain bike pack from one of the category’s oldest brands, and is a solid entry at this size. I rode with the H.A.W.G. NV loaded with all the gear I could think to take on multiple rides throughout the Front Range of Colorado.

Fit and Comfort of the CamelBak H.A.W.G. NV

The anatomically shaped shoulder straps have a nice amount of padding, and are ventilated. Coupled with the D-Fit suspension system, which allows the straps to articulate according to the wearer’s shoulder width, make for a really comfortable pack without needing much adjustment. The waist straps aren’t as wide as other brand’s offerings, but when combined with the wider hip panels do the trick at keeping the pack in place. 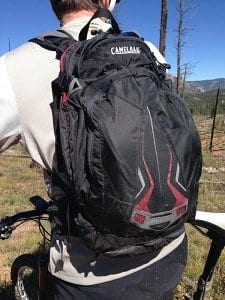 The H.A.W.G. NV uses what CamelBak calls the NV Back Panel, which is comprised of four articulating and ventilated “pods” that keep the main surface area of the pack away from your back. While I certainly appreciated the extra breathability—the system does work—the bottom pod always rested on my back in a slightly uncomfortable spot. It was less noticeable when riding, and not enough to cause me to wreck, but it is worth mentioning. As far as fit goes, the only issue I found is that at 6’2″, the hose is just a touch shorter than I’d like. Not so short I can’t use it, but just short enough I have to turn my head just slightly to take a drink. All in all this is one of the better packs I’ve tried as far as staying put while riding. It didn’t bounce or move around excessively, even on the long rocky descents Colorado can be known for.

The hydration reservoir gets it’s own compartment in the CamelBak H.A.W.G. NV hydration pack, and it sits closest to your back. The next compartment outward is the main pocket which is fairly huge, and has a separator that could be used to to hold a second hydration bladder in place. The next area is a non-zippered open “stash pocket” that expands large enough to fit a helmet, but would be equally as good for a rain jacket or other layer of clothing you want quick access to. Furthest out are the vertically divided tool pockets, one on the left and one on the right. These pockets are fairly tall, and can hold all but the longest of mini-pumps. One side has internal mesh dividers to keep your tools organized, plus a key clip. The other side is more open, but has an elastic loop that can hold a mini-pump, flashlight, or other cylindrical piece of gear. 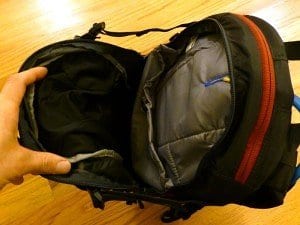 On either side of the H.A.W.G. NV are two small “helmet hooks” which function as a way of carrying a bike helmet by the straps. The idea is to loop the strap in the hook and let it hang from the pack, but I found them difficult to use. Not a big deal since the outside “stash pocket” is large enough to fit a helmet. Hip belt pockets large enough for a cell phone or a couple of energy bars, a fleece-lined top pocket for electronics or other easily scratched items, and a stashable rain cover round out the list of great organizational features.

So Just How Big is the CamelBak H.A.W.G. NV?

I take a lot of stuff on long rides, and this pack holds all of it with leftover space. The stated size of of this pack is 14L, plus an additional 3L for the reservoir, meant plenty of room for all my tools, several spare tubes, a rain jacket, arm warmers, beanie, patch kit, first aid, kit, extra gloves, spare small parts, and a few other items I always take with me. The stashable rain cover is situated at the bottom of the pack, with the vertical tool pockets above it. This moves the weight load distribution towards the top of the pack a bit, but it was still stable while riding. 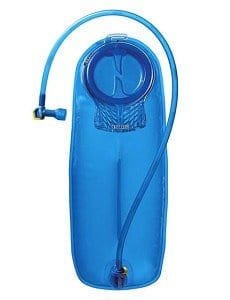 The CamelBak H.A.W.G. NV Hydration Pack comes with a 3L Antidote™ Reservoir which features several nice touches. The opening is located on the side of the bladder, and is a round 1/4-turn cap that is large enough to put ice cubes through and fill fairly easily. The bite valve locks down by a lever which is moderately easy to flip open or closed with one hand. Compared to other hydration packs, the CamelBak Big Bite™ Valve has one of the best water flows I’ve tested and used. It’s also one of the simplest, without any complicated internal parts to wear out or break. I have noticed when the bladder and the pack are really full, the pressure on the bladder can occasionally cause water to leak from the bite valve, although this is easily remedied by closing the shut-off lever. The hose disconnects from the reservoir, which makes it simple to take the reservoir out of the pack to fill it.

The Bottom Line on the CamelBak H.A.W.G. NV Hydration Pack

CamelBak makes a solid hydration pack, and the H.A.W.G. NV is no exception. Usable compartments for organizing your stuff and the versatile size make it a good option for riders looking for a pack to take with them on any length of ride. This pack weighs in at 2 lbs 9 oz including the reservoir, and measures 19″ H x 9″ W x 9″ D. The CamelBak H.A.W.G. NV is available in pirate black or volcano and retails for $150.00. For more information, please visit https://www.camelbak.com/

Evan moved to Colorado in 1998 specifically to mountain bike and snowboard. Sure, he may have told his parents the move was "for school", but after getting that distraction out of the way he started enthusiastically exploring Colorado. His focus in the summer is riding mountain bikes across a variety of disciplines from cross country and trail riding, to downhill and Enduro, dual slalom, dirtjumping, and even a little racing here and there. Evan fills winter primarily with skiing, having switched from snowboarding in 2009, and puts in nearly 50 days on snow each season with a mix of resort and backcountry days. In between skiing or biking Evan can found hiking, camping, backpacking, road cycling, sampling or brewing tasty craft beer, working on a 1970 VW desert race car, cooking at home with his girlfriend, and occasionally utilizing that pesky college degree as a freelance graphic and web designer.