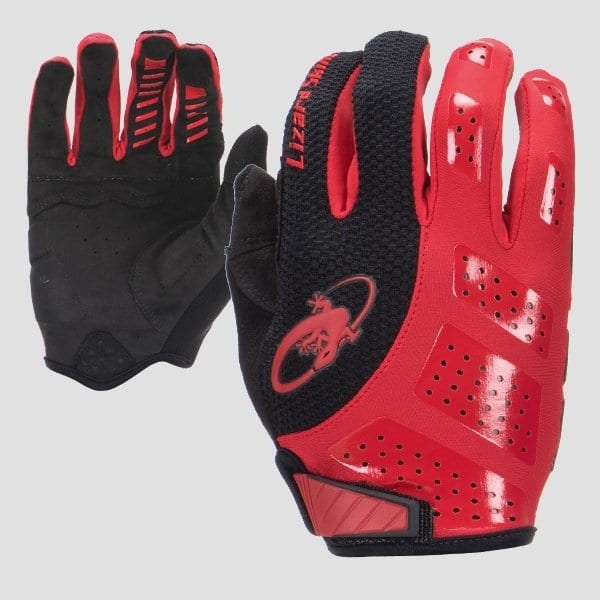 Did you know Lizard Skins made gloves? Neither did I. Lizard Skins has always been a go-to when it comes to bar tape (read our review on their bar tape (HERE), mountain bike grips and frame protection, but gloves? I had no clue. The kicker is they’ve been producing gloves for road, mountain and BMX for over 10 years now. Say what? Yeah, I know.

Now that we’re on the same page regarding Lizard Skins and they’re under-the-radar glove development, we can dive into the Lizard Skins Monitor SL Gel Gloves. The Monitor SL’s are part of Lizard Skins’ mountain bike line and as such, aim to be an all a-rounder that can also do double duty as a baller pair of gravel, CX or even road gloves when you need a little extra protection from the elements.

Most of my time with Monitor SL’s was spent on the mountain bike, but I did manage to take them out on a couple of gravel rides as well as one road ride when the morning temps were just a bit too chilly for traditional road gloves, but not cool enough for an insulated pair. 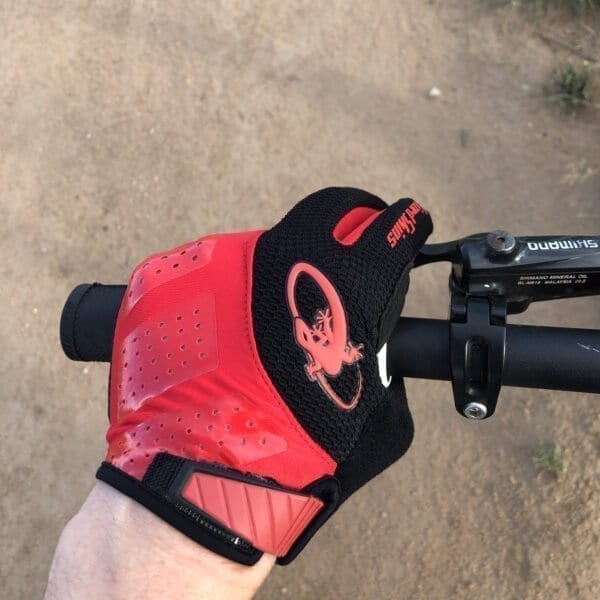 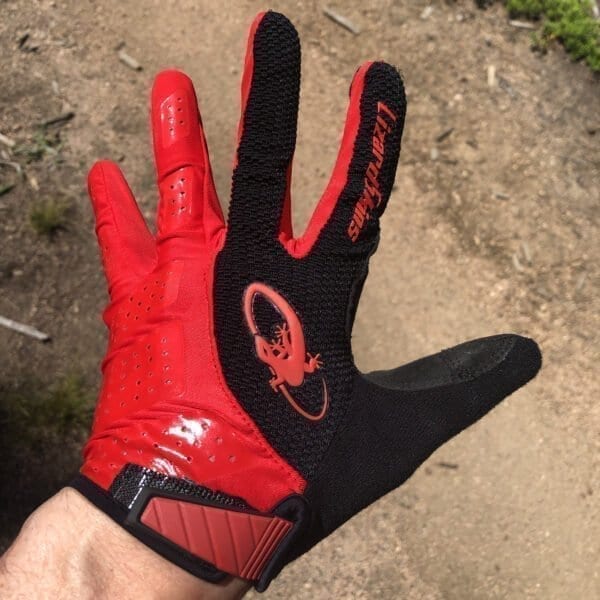 If you’ve read any of my previous reviews, you know I’m a stickler for wearable accessories and fit. My motto being if it doesn’t fit just right, you’re likely not going to wear it. This definitely applies to gloves as contact points on the bike (feet, butt, and hands) will cause serious aggravation if you’re struggling with fit issues.

Sizing is the single most important factor when it comes to gloves. Too large and they feel sloppy, bunch up and have the potential for causing blisters. Too small and you feel like your hands are wrapped in tight Saran Wrap. No good. As far as my personal size, I’m a tried and true size large in nearly any glove I wear, whether it’s for sport, casual, etc. So my when my size large Lizard Skins Monitor SL Gel Gloves arrived, I was pumped to see just how well these bad boys fit considering Lizard Skins touts the superior fit and detailed articulation of their various lines.

I can attest to the fact that they did their homework on getting the Lizard Skins Monitor SL Gel Gloves to mold to the shape of your hand in a rather spectacular way. The gloves fit like, well, like gloves. The Monitor SL Gels almost felt sprayed on…in a good way. There was no slop or movement and they molded to my hand in a way that I found very reassuring.

Finger articulation and movement was also very good. The Monitor SL’s have a subtle curve baked into the design that marries nicely to the natural position your hand will find itself in while grasping a set of handlebars. Again, Lizard Skins didn’t skimp on the R&D phase of the design process.

Comfort is another subjective entity, but I definitely had some ups and downs with the Monitor SL’s.

Breathability was top-notch. Both on the palm and back-of-hand areas. There’s nothing worse than being out on a hot day and having to deal with soup inside your gloves. No worries on that point with the Lizard Skins Monitor SL Gel Gloves.

The materials Lizard Skins used on the Monitor SL’s was also a nice surprise. The use of Lizard Skins’ Perforated AX Suede on the palm not only felt good at first touch but gripped nicely and looks to be a durable material that will hold up to some serious abuse. The back of the gloves have a thin stretchy material that cradled the back of my hand and accomplished one of my favorite things in regards to wearable accessories…it just disappeared. I’m a huge fan of forgetting I’m wearing something and the Monitor SL’s nailed that. Mostly.

That being said, I did have an issue with one part of the fit that caused some discomfort. For whatever reason, the thumbs on both hands came in just a tad short of what I typically prefer. I noticed that issue as soon as I put them on, but wanted to see how the lack of length in the thumb would affect real-world performance. Not 10 minutes into my first ride, I noticed how the tip of my thumbs felt a bit constricted and some unwanted pressure started to appear. I fiddled with the gloves a bit, trying to stretch the thumb a touch and went from there. After 30 minutes or so, I noticed my thumbnail becoming a bit sore from the tightness. Drag-o-Rama. Now, I don’t know if I have freakishly long thumbs, but I typically don’t have this issue with most size large gloves from other brands.

One encouraging point: after wearing the gloves for several weeks in a host of different riding situations, the thumbs have loosened just a bit through stretching and normal wear. My concern, however, is how the constant pressure in that area will affect durability over the long haul as I could imagine a scenario where the thumb starts to rip through over time. Right now, all is well, but we’ll see.

I’m a bit of a princess when it comes to hand protection. I have the most delicate, beautiful, piano player’s hands and I would like to keep them that way. So, when it comes to mountain bike gloves, I tend to gravitate toward the end of the spectrum with more robust padding. The Lizard Skins Monitor SL Gel Gloves are certainly more on the subtle padding end of the spectrum.

I never had any real problems with the level of padding, but I never took them out for more than a couple of hours. Let’s say I were heading out for an all-day epic on the mountain bike, I’m not sure the padding would suffice for my level of delicacy. Granted, I think I’m a bit of an outlier here as most of my riding partners seem to prefer a lower level of pad in order to feel more connected to what’s going on at the front end of the bike. Again, I’m a delicate flower.

For the gravel and road bike rides, this level of pad suited me perfectly. The lower level of road abuse you take on those types of rides had these gloves feeling good. We’ll say this bowl of porridge was just right in that regard.

A final note on protection: if you’re shredding the gnar on the regular, it’s worth noting that there isn’t any back-of-hand protection on the Monitor SL’s. Not a problem for me as I’m a pretty tame trail rider, but if you’re bendin’ it like Beckham, it’s worth considering.

As mentioned above, I tested these bad boys on mountain, gravel and road rides. In my humble opinion, they straddle a middle ground of being able to do a lot of things well. I never felt over gunned on the road bike with the Lizard Skins Monitor SL Gel Gloves, but likewise, never felt like I was left wanting on the trail. Again, if I were doing an all-day ride on the MTB, I might change my tune on that, but for those 2 hour after work rides, these gloves fit the bill nicely. 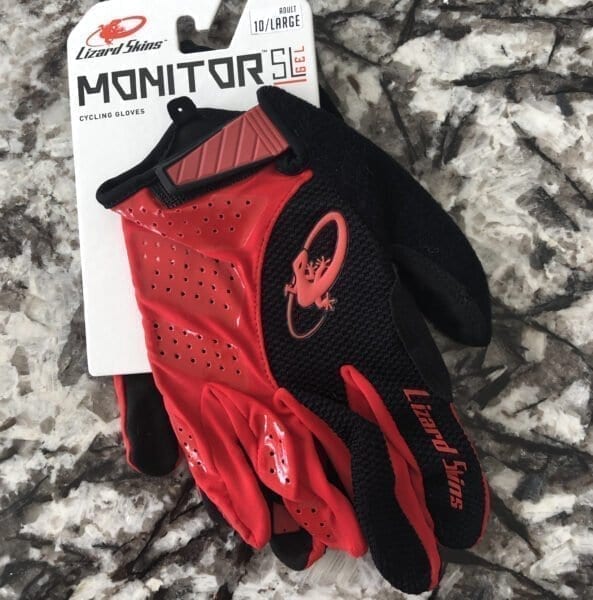 Red is the fastest color, so naturally, that’s where I went. The color is hot and always looked good as I worked through my test period. What more can you say? Red is fast, so get after it. 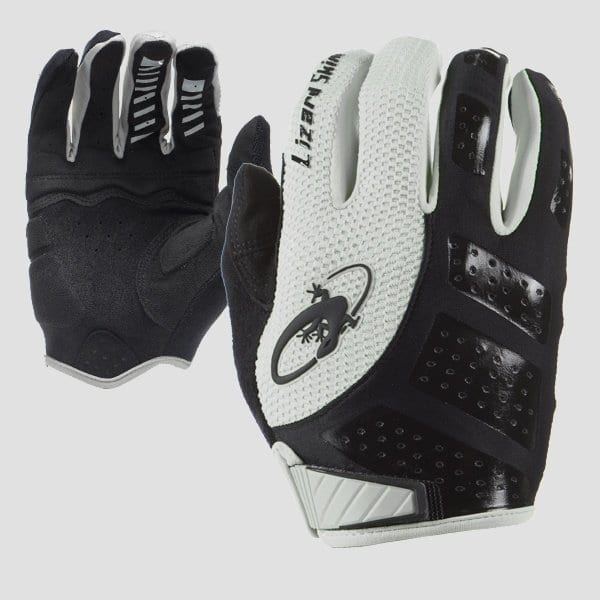 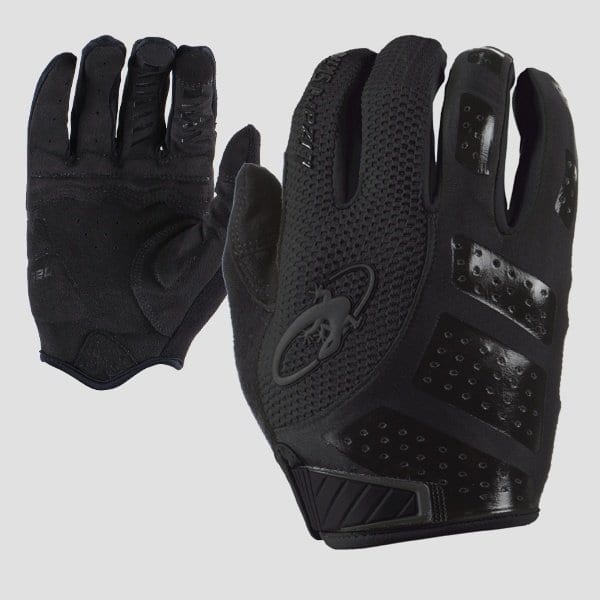 The Lizard Skins Monitor SL Gel Gloves are a good all-around glove with a precision fit that can do double duty on both flat and drop bars.

The Lizard Skins Monitor SL Gel Gloves do a great job positioning themselves as a mainstay in your glove arsenal. Barring one small (but annoying) fit issue, the Monitor SL’s proved versatile and comfortable which allowed them to work well in an array of cycling situations. The one glove to rule them all? I’ll let you be the judge of that.