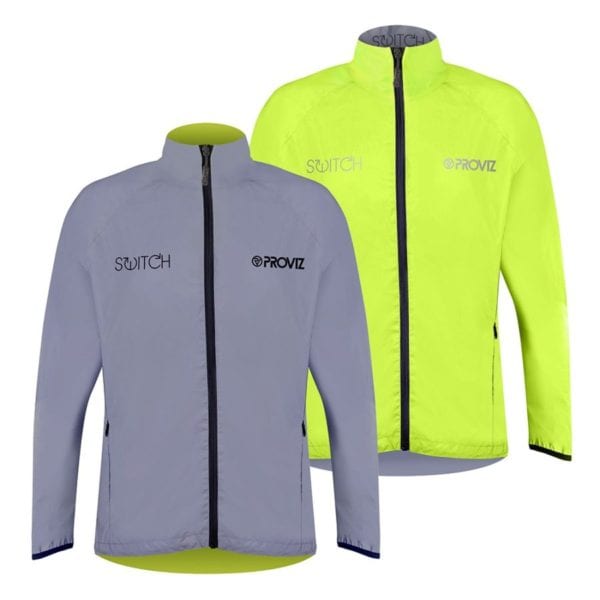 I received the Proviz gear mid summer, and I was super excited about it. I want to be seen and stay safe out there. The thing is, we have had this endless summer around here, and the sleeveless jacket, shoe covers, and gloves also have some warmth built into it. It is now late September, and even though I leave the house at 5:00 for my rides the temperatures have still been in the 50’s. That is changing, and I am stoked to add this gear to my shoulder season and winter riding arsenal.

I ride in large groups two to three times a week, and there is definitely safety in numbers. That said, I still need to get to the meet-up spot, and staying lit up like a Christmas tree is just fine by me. PROVIZ is based in the UK. They know a thing or two about biking over there. Add in their climate and plenty of gray foggy days which provide a perfect testing ground for their R & D department. 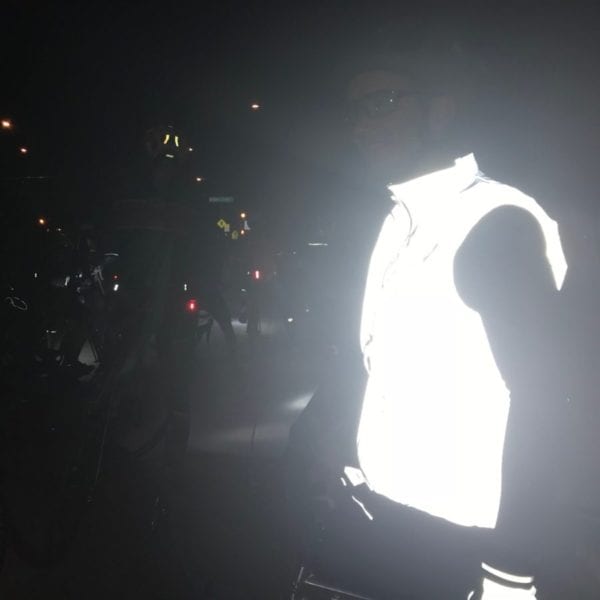 Flash photography in action showing the reflectivity and visibility.

Every review gives me the opportunity to dig a little deeper into something, and the word “Gilet” jumped out at me as a good front runner. Gi·let: pronounced ‘Zhila/ – noun. It’s a light sleeveless padded jacket. Its origins come from the late 19th century: first it was the Turkish yelek, then the Spanish jileco, and finally the French, ‘gilet.’

Gilet is not a term we throw around when going for a bike ride. However, we do love to integrate the French cycling jargon. Peleton, echelon, domestique, maillot jaune, grupeto are terms that come to mind. I’ll see how Gilet is received by my fellow riders, but I’m probably going to stick to sleeveless windbreaker on this one; a highly visible windbreaker at that. 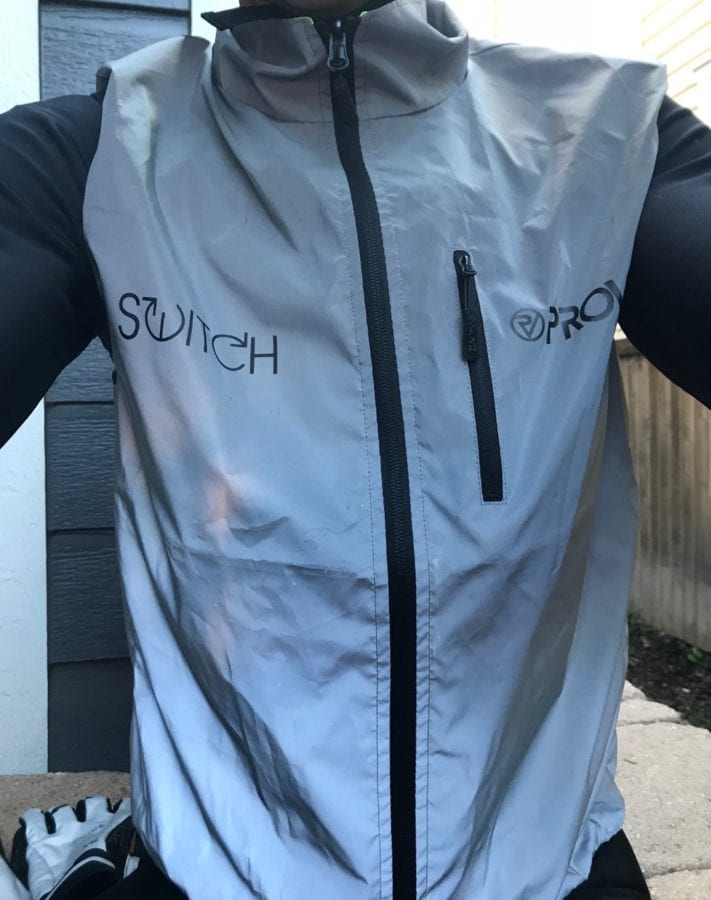 The ability to switch from reflective gray to fluorescent yellow is rather unique. It’s certainly not a new concept, but being able to pull it off has always been the tricky part. I have never been a huge fan of the fluorescent yellow gear that is out there. I get that it is super visible, and in the end that is what counts. Subsequently, that is why I like the ability to turn it over to the silver side. It’s simply a matter of style, I suppose, and I’ll certainly sport the highly visible fluorescent yellow, especially as the days get shorter. The Proviz Gilet has dual-layer reversible materials, and it is meshed for breathability. 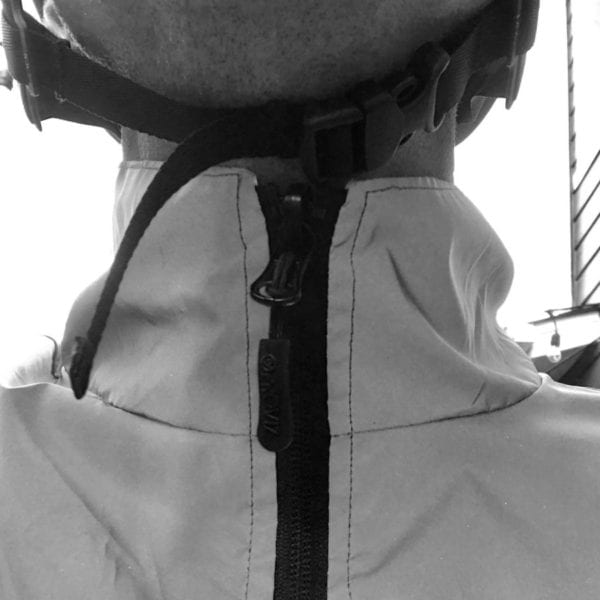 The zipper is two-way as well. A nice feature for sure, but I do wish they would have incorporated a “chin guard” on both sides to keep the stubble from catching on the zipper. A small piece of cloth where the zipper tucks into could be an option? I do think it would depend on how that would affect the two way feature. I will leave it to Proviz to figure out. 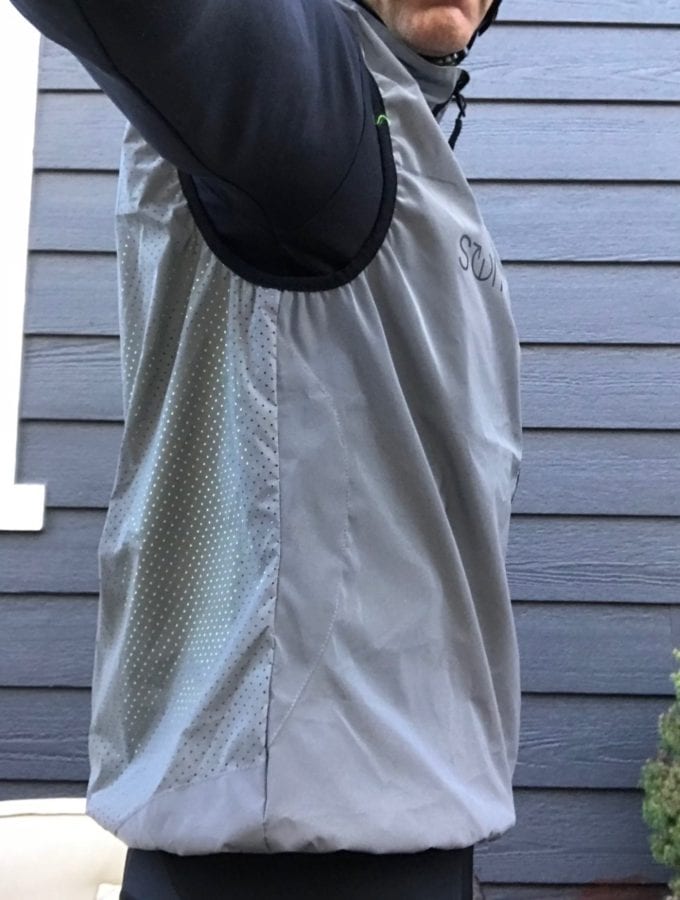 Slightly to big in my opinion, so do keep that in mind for sizing. Mine is a Medium, and that’s a size that usually works.

My first ride was in the low 50’s. It may still have been slightly too warm, but I was eager to break out the Gilet. My base layer did its job in wicking sweat. I never felt too hot during the ride, but the minute I got back there was some moisture on the inside of the PROVIZ jacket. Again, I do think it was still too warm for wearing this, and it will regulate itself better when we hit the 30’s and 40’s. 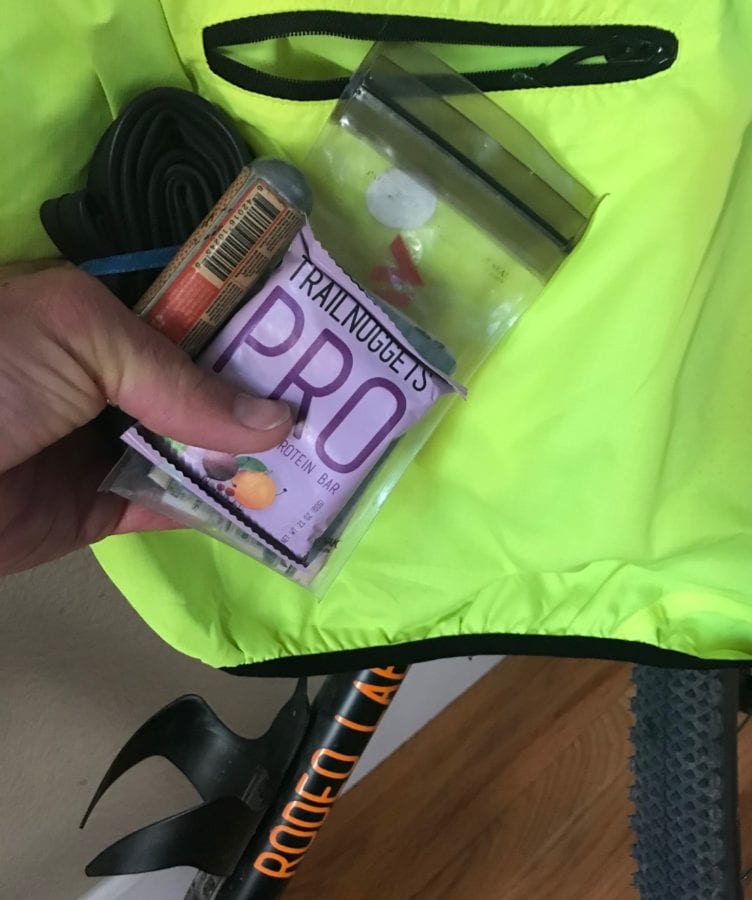 Back Pocket (only on the neon side) is big enough for food, tube, cartridge, and valuables. My phone went in the front pocket.

The Proviz Waterproof Shoe Covers are sweet looking and bright. They are going to be in-motion beacons as I traverse town. Reflect 360 is PROVIZ’ term on the visibility side of things. The Shoe Covers have a 100% reflective outer-facing paneling to aid in that bounce back flash that hopefully is noticeable to the drivers out there. If distracted drivers could only stay off their phones…… Ok, I digress, because I could write a book on that one. 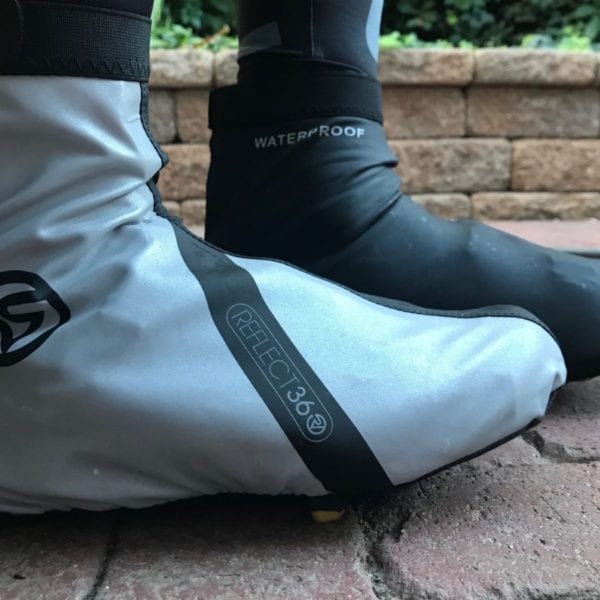 The waterproof and windproof PU coated fleece features have me super excited. Cold toes is no way to tackle a ride, and these will be fun to push to the limits. I’ll report back mid winter to tell you how they’ve handled the coldest temperature I braved. The toe and heel is reinforced, and those have me concerned a little. That is obviously the point at which the likelihood of damage can occur.  I am glad it’s there, and hope it can last several seasons of wear. The Velcro strap will surely also see some abuse as it is on the bottom of the shoe. Getting them on and off is super easy, so that’s a great start. I don’t have to fight with a full shoe cover that needs to go over the entire boot. 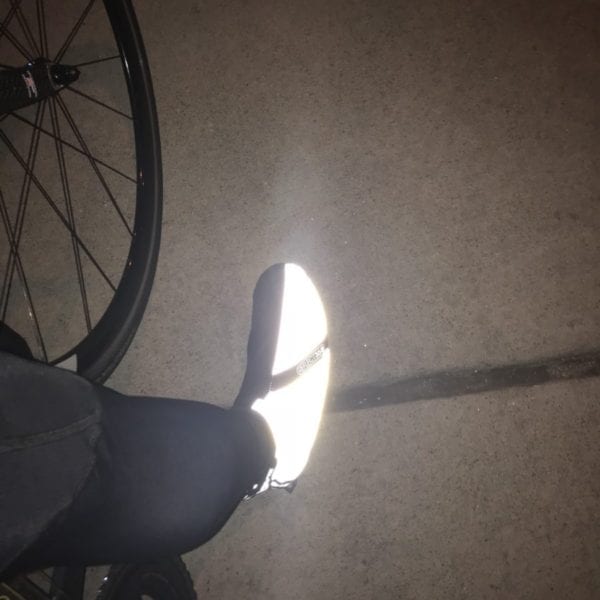 The Proviz shoe cover is a product that is going to be worth its weight in gold. 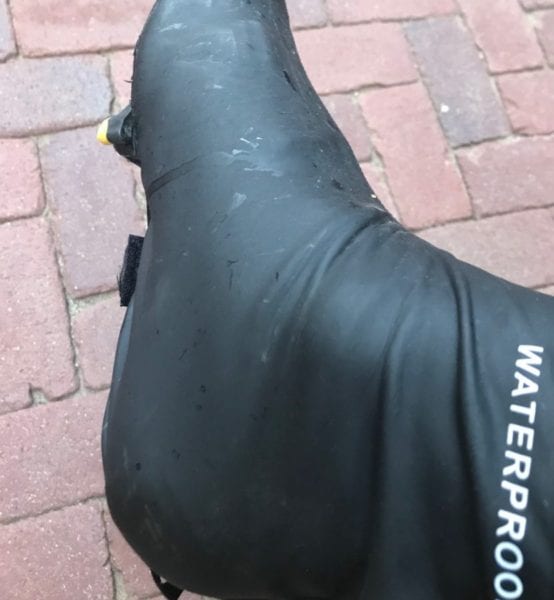 The bicycle side of the shoe cover is a stretchy rubber-like material. 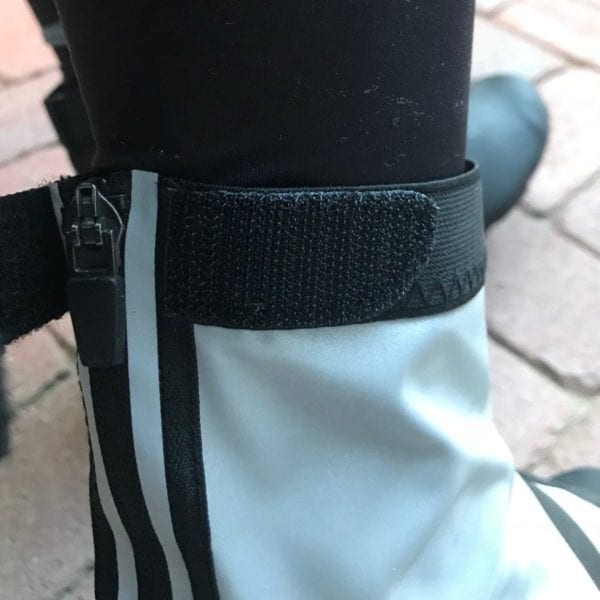 Extending the velcro for more sizing options would be good, because I have a slight gap around my ankle. 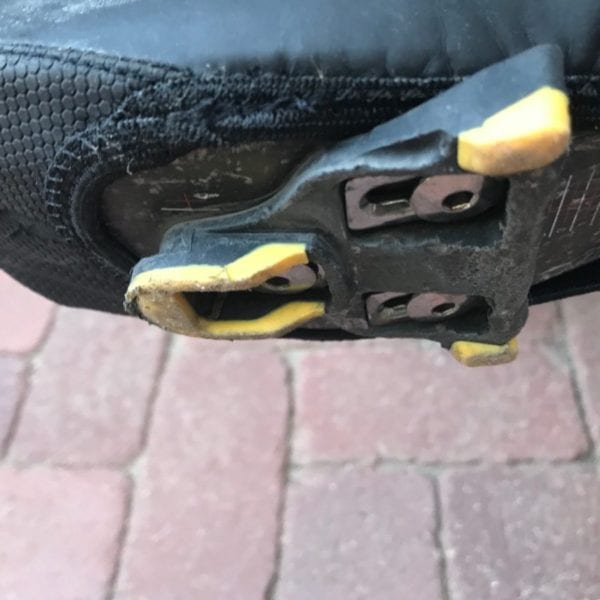 Easy to put on and take off. I do wish they went a little beefier on the toe and the edge cloth/band around the cleat. 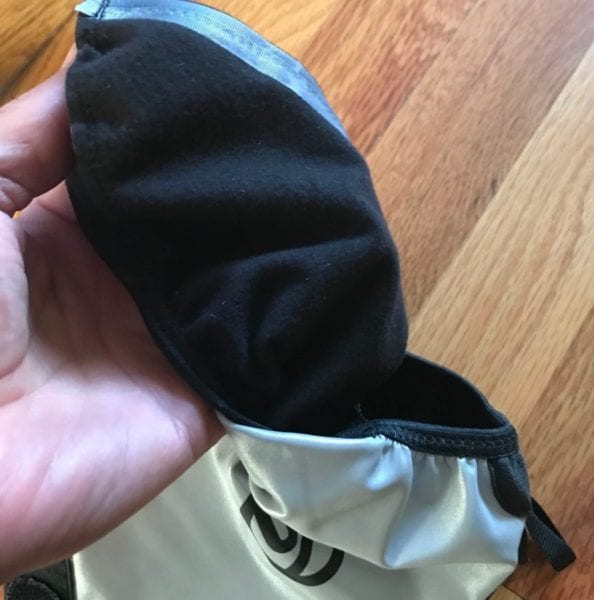 Some thermal qualities on the inside of the Proviz shoe cover are a great feature.

Check out Proviz’ video with dramatic music to provide a really good look at the impact of this reflective gear.

The Proviz Cycling Gloves also incorporate the 100% reflective materials. The lining is weatherproof and breathable made out of Korean Hipora Lining. This Hipora lining is a very unique application favored in cycling gloves as the wind chill factor is front and center. A ride can be brutal if the fingers go numb and cold. Again, in this case, the limits of the temperature range will be tested. As of right now, they have performed great with temperatures in the mid 30’s to mid 40’s. 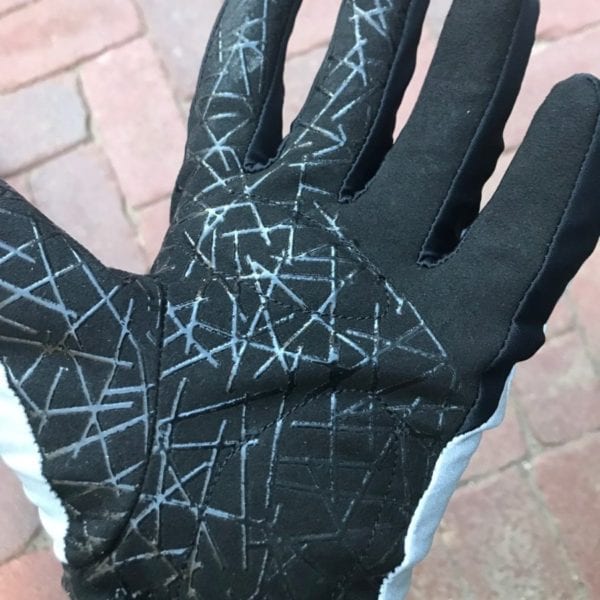 The grip is random and “grippy”. 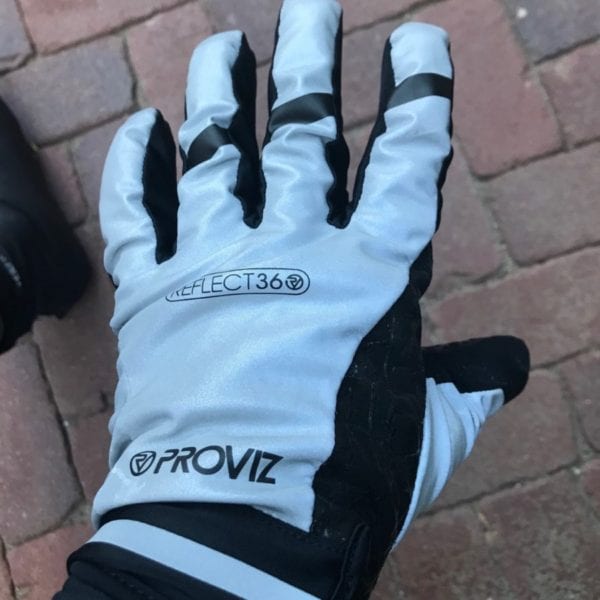 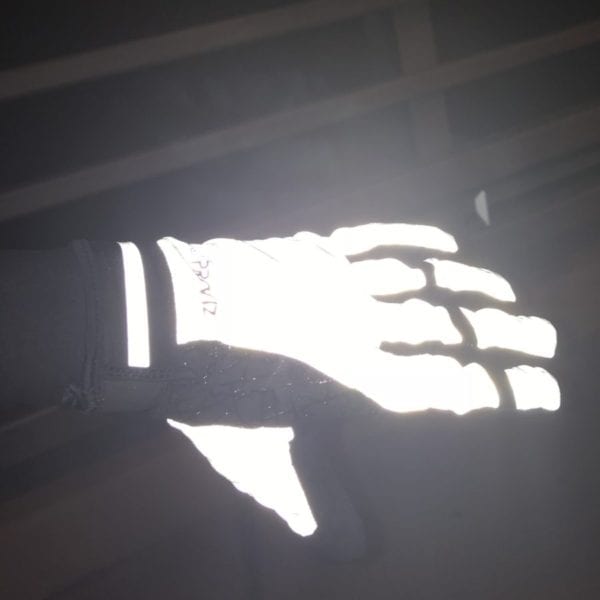 The Silicone web grip looks cool, and does its job to provide enough grip while allowing enough “feel” to shift and brake. 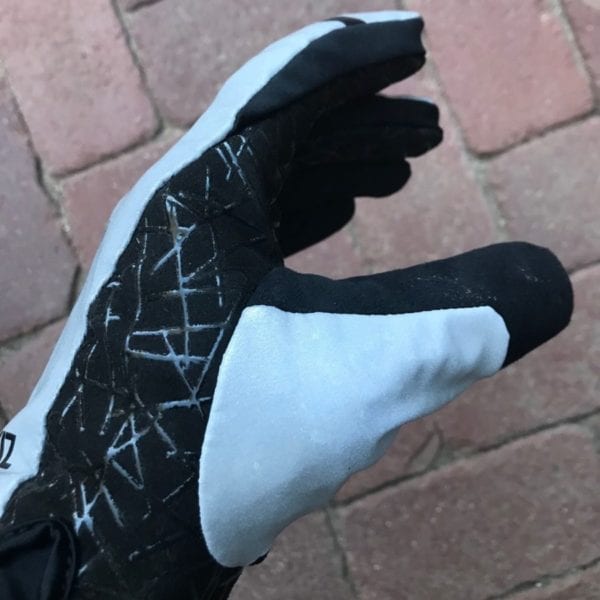 Sizing Of The Proviz Gear

Gilet: I went with a Medium, and I must say I still have quite a bit of room as it bunches slightly. I will obviously be able to add more base and mid layers as it cools off. A small simply seems absurd. I am 6’-1” and 165-170 pounds, and really don’t see myself as Small. Keep it in mind with sizing. If you can try one on first that would be perfect.

Gloves: Size Large. I have learned my lessons over time, that cycling gloves are always on the small side. The Large is even a bit snug, but will definitely work.

Shoe Covers – I went with X-Large here. I have a Euro size 45 shoe, and I would have hated for these to be too small. This is the perfect size for me, and with some stretch could surely go a few more sizes.

Kind of an interesting take that the range in the sizing spectrum for me could go from Small to Extra Large in the various items. 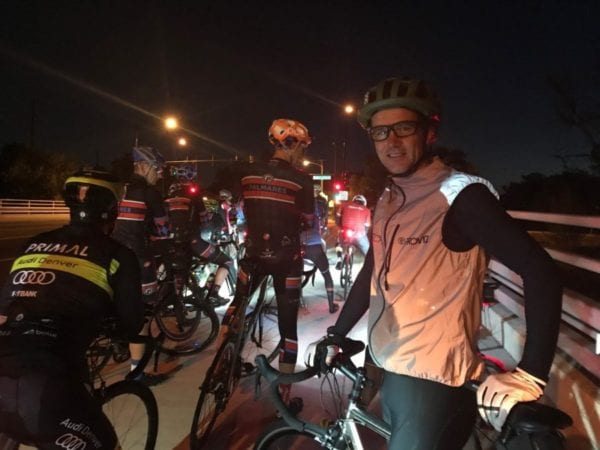 Ready for action. This is the no-flash version of being seen.

PROVIZ has a wide assortment of clothing to choose from, and for this go-around, I wanted to look at accessory items to bring to light. Many cycling clothing manufacturers have a visibility line, or certain articles that have reflective elements built into them. PROVIZ has taken this “being seen on the bike thing” to the next level. Visibility and light reflection are a constant in this review, and for good reason. Taking the extra steps to make yourself a bright shiny beacon could literally save your life. Words to live by. Therefore, go to their website, and find something that works for you. You’ll thank me later.

****prices subject to change based on exchange rate, world economic factors, and whatever markup price your favorite retailer wants to add. In either case, Proviz is well worth the safety precautions to save your life!

For more information and purchase please check out: www.provizsports.com