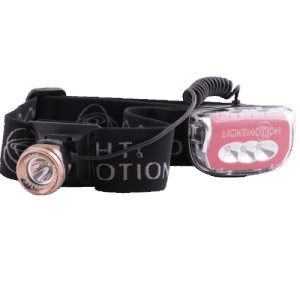 Training for a spring marathon in the Mid-West is the perfect scenario for testing this rugged and BRIGHT headlamp. The sun is barely up by 6:30 a.m. and it’s completely dark by the time I leave work at 6:00 p.m. A companion to keep me visible as well as allow me to see where I’m going is a helpful addition to my running accessory drawer. I was excited to see the Light & Motion VIS 360 Run Headlamp show up to aid in my training. 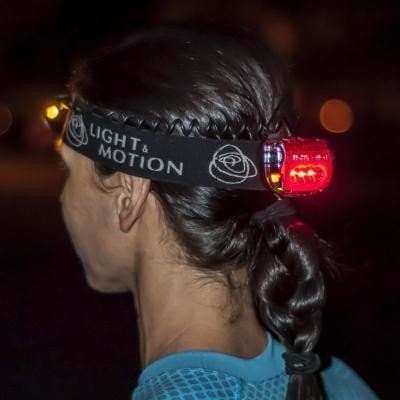 Putting the Light & Motion VIS 360 Run to the Test

The VIS 360 is structured to provide that 360 degree illumination for runners by mounting a single LED light on the front of the sturdy head strap and three smaller LED lights surrounded by reflectors at the back. The Light & Motion VIS Run 360 not only guarantees that you are able to see where you’re going, but also ensures that I am visible to other people on the roads & trails. Being seen by vehicles, bikes, and other runners is infinitely more important to me. I don’t mind being a lighthouse beacon when I’m out and about, as long as I am safe.

Light & Motion initially came into the market with “illuminated gear” for cyclists, and the Vis 360 Run is an adapted version of the VIS 360 product made to be mounted on bike helmets. The lighting system itself is identical except the mounting method for lack of a better term. The Vis 360 Run comes with a head strap that easily slides on and off, but stays put when needed. The cool thing about the Run system is that it can also be mounted on the front & back of a bike helmet.  Because of its versatility, this is definitely the one to get if you like to mix it up a bit. 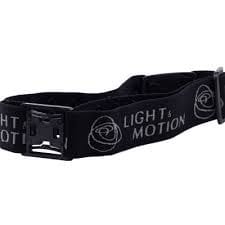 The Vis 360 Run is crazy bright and is designed to illuminate a wide area, not just a focused beam of light. I was amazed at the glowing orb of light that surrounded me illuminating everything in my path.  On the flip side, I have found the entire set up to be a little heavy. In order to keep all the pieces safely secured, the head strap is pretty thick and feels a little rubbery on the forehead. It’s a small price to pay for complete visibility and safety, but I wanted to mention it.

I would absolutely recommend this headlamp for early morning or late night trail runs where it is important to see the path ahead.  It’s critical to be able to adjust your footing, and for runs where you’re focused more on technically navigating a course then setting a road race PR. I would suggest that if you’re wearing the lamp for any significant distance that you wear it over a hat or a bandana. The strap is sturdy and stays in place, but the elastic material has a bit of a rubbery feel that doesn’t really breathe and feels a little tight after 30 minutes of running (at least for me). A hat took care of that problem for me, and I was able to go for an hour or more without any issues. 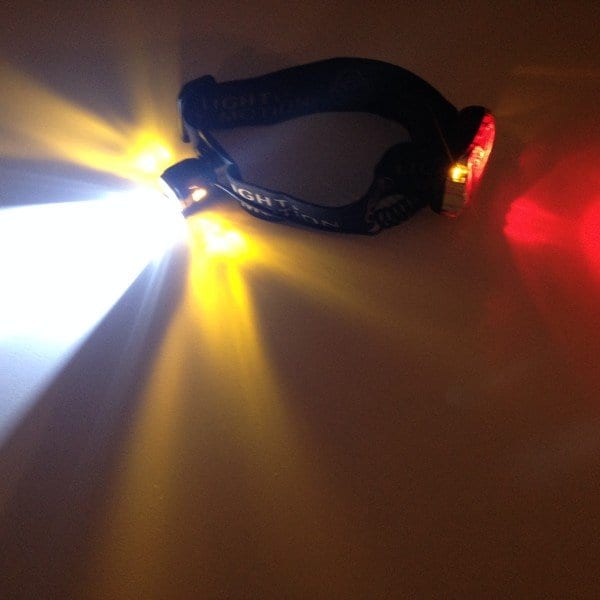 Check out the front, side and rear illumination cast by VIS 360

This headlamp is a really nice option for being able to see out on the roads and trails. The plus side is that you will be quite visible from every angle.  While this might not be the perfect head lamp for every run as sometimes the moonlight provides adequate lighting (It is darn good for trail runs in the dark though), the VIS 360 Run is also great for the commuting cyclist. VIS 360 components connect easily and securely to the front & back of all helmets. The bright front light illuminated the full road ahead of me when commuting, and the taillight is bright enough to ensure all drivers on the road will see you. The VIS 360 gear is built to last. It is sturdy, well designed and has a rechargeable battery (re-charge via USB cable). At $110, this is a good value for staying safe no matter where you are. This light now has me contemplating attempting an ultra….