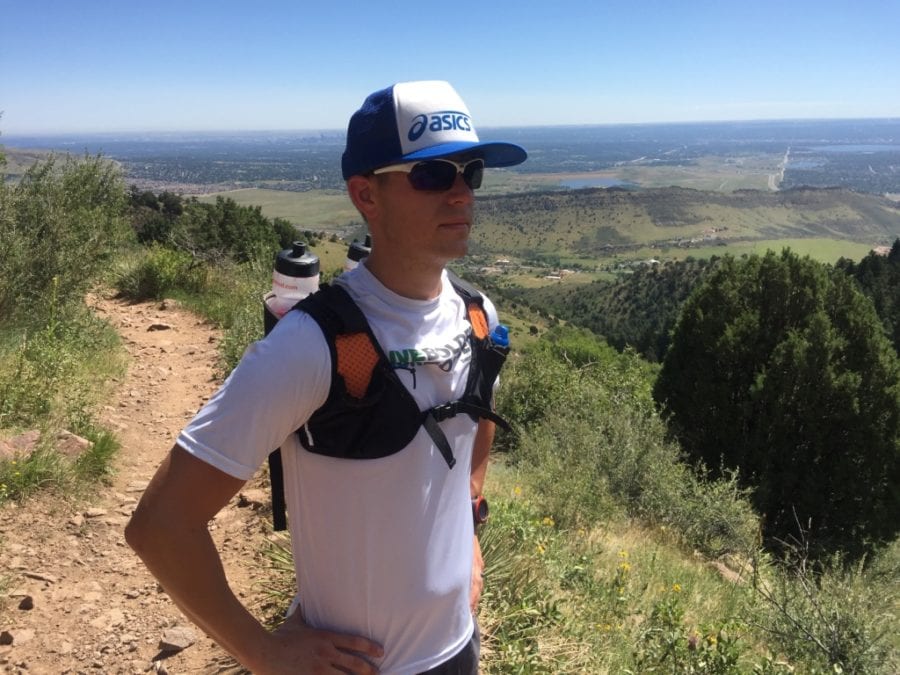 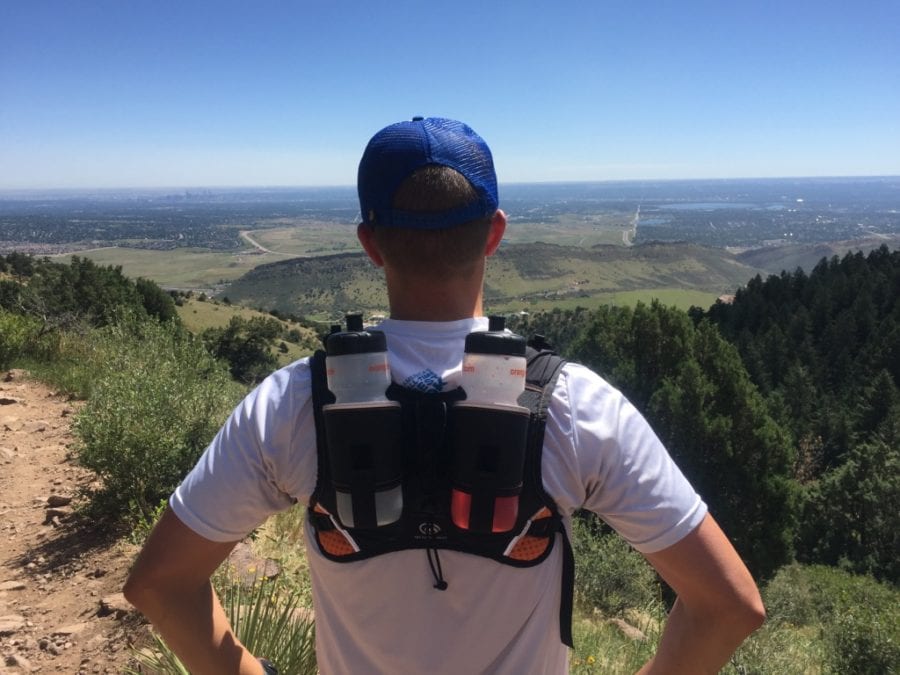 Two bottles; I use one for fuel (carb loaded drink of your choice) and one for water – Vest Pack 2 = added pockets and features 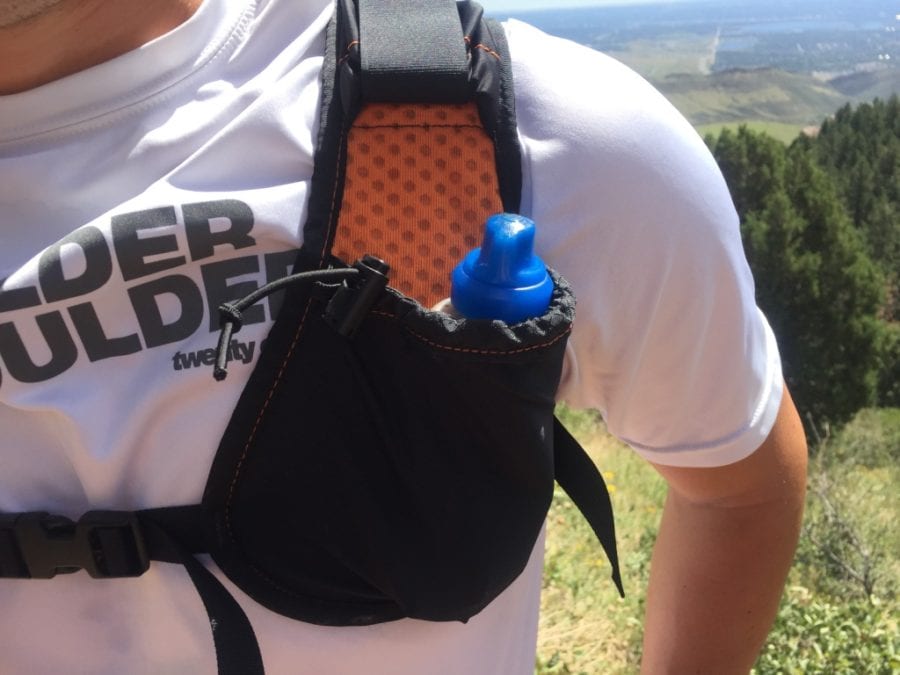 Pouches on either side allow you to carry extra fuel, but are nicely ventilated 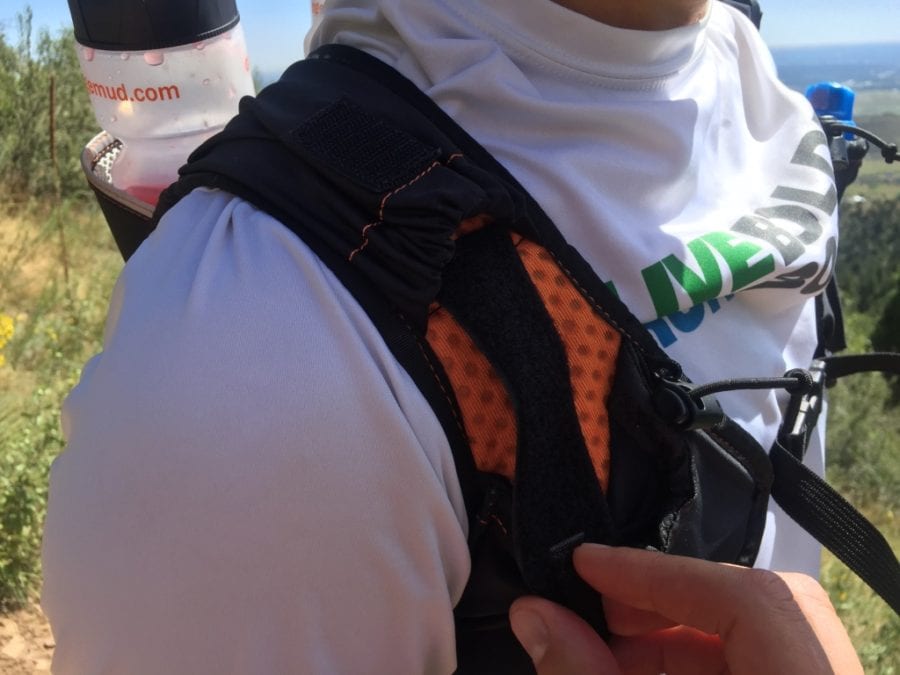 An extra “stash” pouch with velcro closure sits on either shoulder. 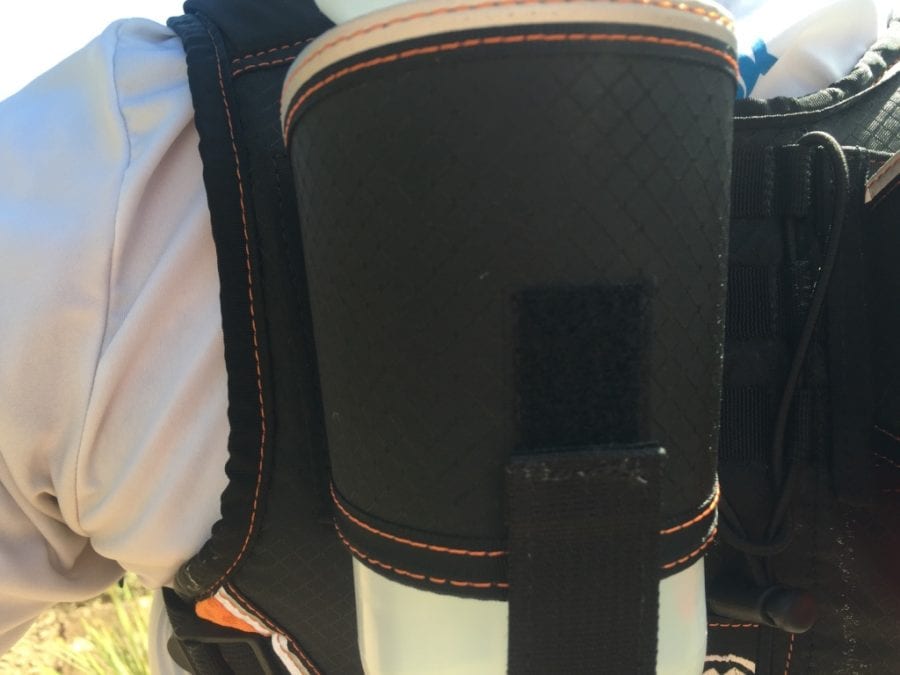 The bottle holsters have an extra long piece of velcro, allowing you to adjust the bottle position 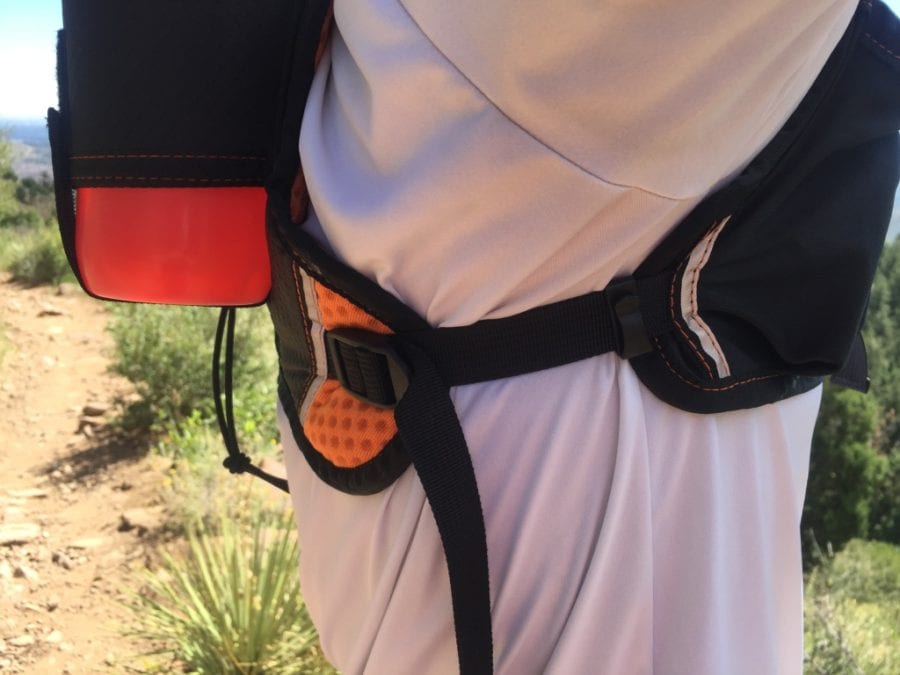 Easy to adjust straps run on either side 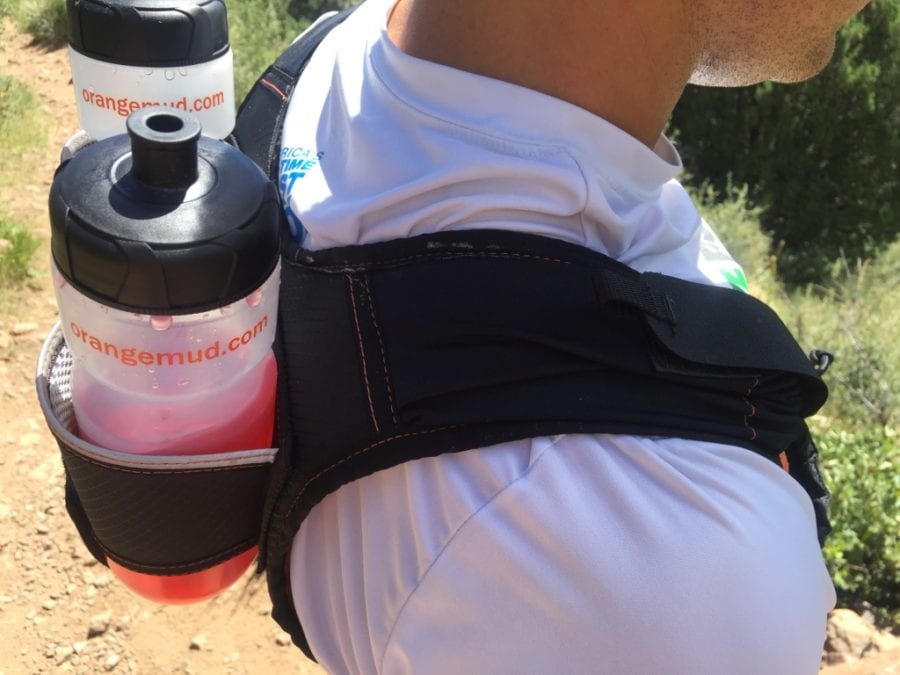 The bottles ride high up on your shoulders, eliminating annoying bounce 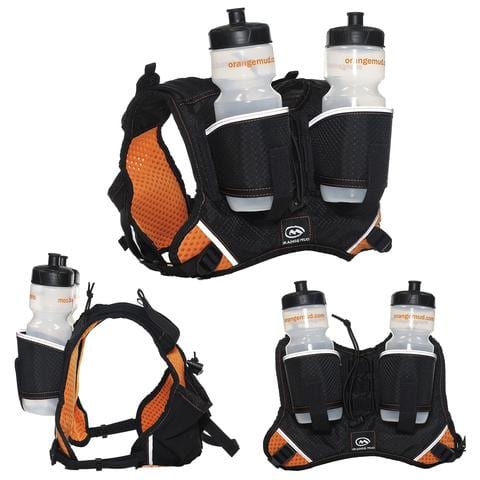 “Innovation from frustration” is the Mantra from Orange Mud founder Josh Sprague (read our interview here) – Josh was bothered by many of the same things that all runners face when using a water pack. The fit was sloppy, the pack bounced around, chafing ensued, there were too many pockets, there weren’t enough pockets, you couldn’t put your favorite drink mix in it without gumming the damn thing up – the list is practically endless. Having tested quite a few packs myself during my years at AGR, I felt his pain. I had one trusty pack that was on it’s last legs – it wasn’t perfect, but it did the job… mostly. Enter the Orange Mud Hydraquiver Vest Pack 2 which promised to cure what ailed me. But I get ahead of myself…

I first ran into the company at a marathon in Nebraska of all places. After running behind a guy with the Orange Mud Hydraquiver Vest Pack 2 on for nearly 18 miles and watching him comfortably sip cool water from his double water bottle configuration while I depended on aid stations that ran out of water, I decided maybe the company was onto something. I couldn’t stand wearing a pack for road marathons, especially really hot ones – I developed chafing, never got the fit quite right, and didn’t like where the water sat on back. Most traditional packs rode WAY too low on me, and as you can see from the photos above I’m pretty average height. This guy in front of me – he had no such issues. I talked briefly to him about the pack, but lost him in the shuffle at the finish line.

Fast forward a few months, and I see Orange Mud again, this time at a half iron distance triathlon. It immediately made sense to me – fuel and water in the same pack, with ample places to stash food and fuel. I got a much closer look this time, and realized that the pack had a great balance of features, as you can see above. It made sense to me that it had just what I needed, and not much else. The string on the back could serve to hold any kind of jacket or spare running top, the straps were fully adjustable for all body types without getting in the way, and bonus – it didn’t wrap around my gut, causing uncomfortable chafing and fit issues.

The fit on the Orange Mud Hydraquiver Vest Pack 2

Contacting Josh was pretty simple – he’s a guy who believes in his product, and stands behind it. He graciously agreed to send one along for testing, and even offered to help with fit tips and tricks. Josh needn’t have worried, because the fit is super simple. It rides high on your back (think, shoulder blades) and sits easily within reach when you put your hand behind your head. I had to monkey around with it for maybe a couple of minutes (far less than other packs we’ve tested, for comparison) before it felt like it was just gonna move with me. The key for me was in the adjustability of the strap configuration. Most packs have about a billion straps to pull (okay, like five) to get them to sit right – if you’re like me, you are constantly pulling one or the other to get the pack to sit in the right place. The Orange Mud Hydraquiver Vest Pack 2 has three straps, and they work pretty ingeniously – just throw the pack on, lock down the side straps and THEN pull the front strap as tight as you want. That’s it. Josh has a handy dandy fit video if you need it here (but seriously people, it ain’t rocket science). It immediately settled into a comfortable place, riding high, and felt comfortable. Since Orange Mud makes the claim that it’s truly unisex, I threw the pack on my wife who’s over half a foot shorter than me. A couple of quick adjustments, and she was loving it as well. It was a *bit* of a fight to get it off her so I could test it, though…

I got quite a few long, hot runs in the Orange Mud Hydraquiver Vest Pack 2 over this past summer and spring. Enough to vouch for how that pack does on runs of up to four hours, on both cold mornings with a jacket on and stupid hot days where I didn’t want to be doing anything remotely resembling a run (hey, run when you can – when work and kids get in the way, sometimes you gotta run at lunch). What more can I say than that I mostly forget I’m wearing the pack. I’m not sure why no one thought of this configuration before, but Josh and the folks at Orange Mud nailed it here. I guess if I had to be super critical I could say that the sound of water sloshing around in the bottles was annoying, but I’d be lying. It’s not that much louder than when it sloshes around in any other hydration pack, it’s just that it’s right behind your ears. If you have a problem with that, find another pack that doesn’t fit well, causes chafing, and only allows you to bring one type of liquid. The pouches up front are more than ample, allowing me to bring anything I wanted along – I detest bringing a phone with on my runs, but I was actually able to jam an iPhone in just about every pouch that’s on this thing.

I’ve said a few times that I like bringing a carb drink and water with on runs, which you might think is the best part of the Orange Mud Hydraquiver Vest Pack 2 – it is… but it also isn’t. The best part is that because you are using traditional water bottles, the clean up is a cinch. No more crappy tube systems where you can’t clean the mold out from last year and it still smells like that one time you thought it’d be a good idea to bring beer in it to your favorite local jam band (c’mon people, that’s not just me who thinks of these things). You don’t even HAVE to use the bottles that come with (even though for included water bottles, they really are pretty nice), you can jam any kind of bottle in there.

Because there’s a strap system on the bottle holsters, it was easy to adjust the bottle within a comfortable reach for me. Also for my wife, who’s arms are much shorter. I like putting the bottles back mid run, too – it feels like I’m sheathing an awesome sword. Alright, I get it, I’m super nerdy. Sue me. When not jamming an iPhone into the other pockets (just to see if I could for testing purposes) I was actually able to stash GU in the shoulder pockets – in the photos above I was carrying a GU flask in the front pocket, but pick your poison for whatever fuel you use – and carry honey stinger waffles IN A FRONT POCKET. If you love those waffles like I do, you know the issue with trying to carry them… anywhere. This pack fits ’em up front. Which rules.

It’s pretty clear to see that I dig the Orange Mud Hydraquiver Double Barrel Hydration Pack – it took the concept of a water pack, and made it not suck. Seriously – sometimes the outdoor gear world over thinks things, and Josh took the idea, stripped it down, and kept only what was useful. At a price of $149.95, it’s a great purchase considering the multi-sport use, the inclusion of the bottles, and durable construction/build. The ventilation is great even on the hottest of days, and the pockets are perfect sized for all of your fueling needs. Josh even taught me a trick when we met – while the bungee on the back of the pack was being used by myself to stash anything extra I needed to carry (usually a rain jacket/trail jacket combo thing I’ve come to love over the years) it also can be locked tight enough to carry a third bottle of water too. There’s no end to the stuff he comes up with, I swear. Head on over to the Orange Mud site for more details, or just to pick up a sweet trucker hat. Cheers.