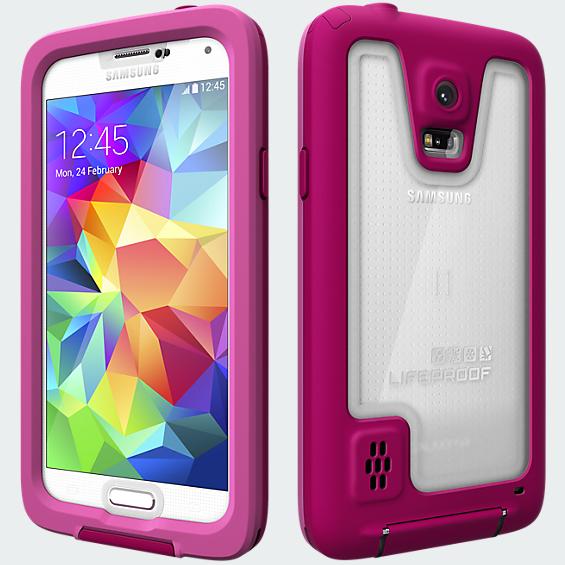 If you are an active person and take your phone on most of your adventures, then you need to ensure that your phone or rather, investment, is well protected. Thankfully, the company LifeProof exists and offers cases for not only iPhones, but also for Samsung and Motorola products. I have been testing out the LifeProof Galaxy S5 fre case for the past month or so. The phone has been involved in my day to day pursuits, which include backcountry-nordic-alpine skiing, snow running, and a busy on the go workload at the hospital. As my husband often states, “You are hard on things!” Therefore, the LifeProof Galaxy S5 fre has been a much needed addition and I have put it through the ringer. 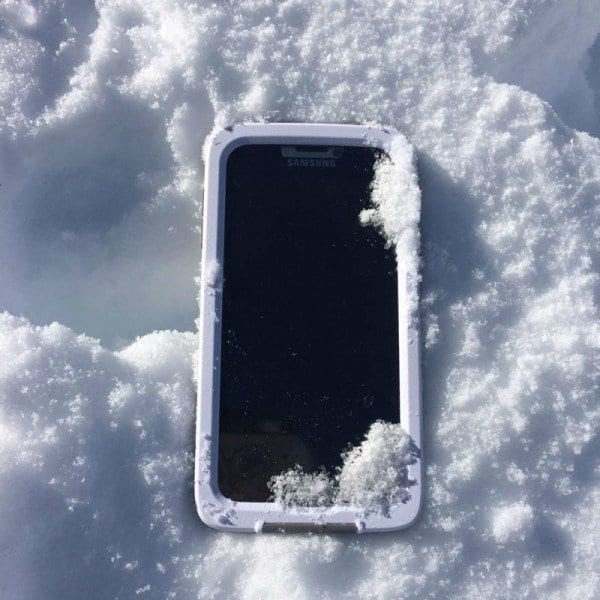 Upon initial inspection, just out of the box, the LifeProof Galaxy S5 fre appears relatively unimpressive. I have tested out various cases from Otterbox in the past, and those cases felt tough and bulky in my hand. The plastic feels relatively flimsy without the phone inside and I had some hesitation that this phone case would live up to its’ long list of accolades. For starters, the LifeProof Galaxy S5 fre has met Military Standard 810G-51.6 (technical speak!) for drop and shock protection. In layman’s terms, the LifeProof Galaxy S5 fre can withstand drops from 2m or 6.5 feet. Most drops come from about waist high, with the phone sliding out of my hand when getting out of my pack, or approximately 3.5-4 ft. I have dropped the phone in the snow, on concrete, dirt, and rocks. The phone is no worse for the wear, which is awesome, but the case does have a few scratches from the ordeals. Even if the plastic feels flimsy, it does its’ job, protect the phone.

In addition to protecting your phone from drops, the LifeProof Galaxy S5 fre case also increases the Samsung Galaxy’s waterproof rating from IP-67 to IP-68. The Samsung Galaxy S5 is water-resistant right out of the box, but cannot withstand submersion. With the addition of the LifeProof Galaxy S5 fre case, your phone can safely be submerged in up to 2m of water (6.5 ft) for up to 1 hour. The case is able to achieve this thanks to the tight seal and ringed gasket. This combination makes the phone case harder to slip on and off, but worth it in terms of what you get for protection. I am not a big water sports aficionado, but I can safely say that the phone has withstood many drops in the snow and has remained dry and functional. 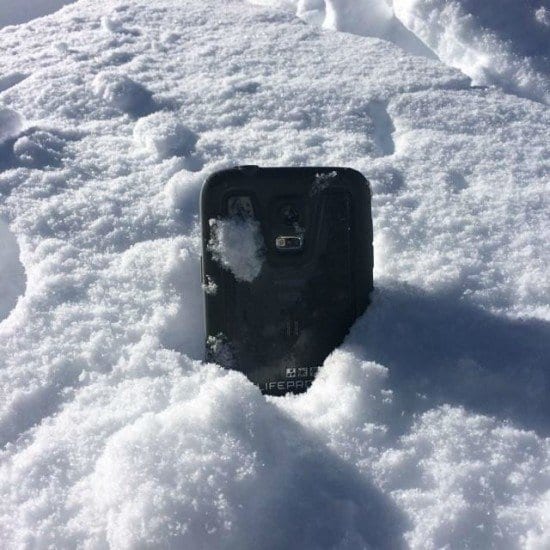 The LifeProof Samsung Galaxy S5 fre features  an integrated plastic screen protector. It is great having the protection built in, but I found some major draw backs. For starters, the screen protector smudges like crazy and my phone always looks dirty. The screen protector also has a small bit of space between the case and the front of the phone, which creates bubbles to form. I also experienced major glaring of the screen and the crisp Samsung Galaxy S5 features are quickly lost. The screen protection is not full of only negatives, as the touch screen is still completely functional in real time, without delays. You can continue to use your finger scanner at the front and the heart rate sensor just below the camera. Speaking of the camera, the lens of the camera on your phone is covered by an anti-reflective optical-glass camera lens. With the case in place, I didn’t notice a change in photo or video quality, a major plus! The same can’t be said for my dear friend that uses a plastic bag to waterproof her phone! 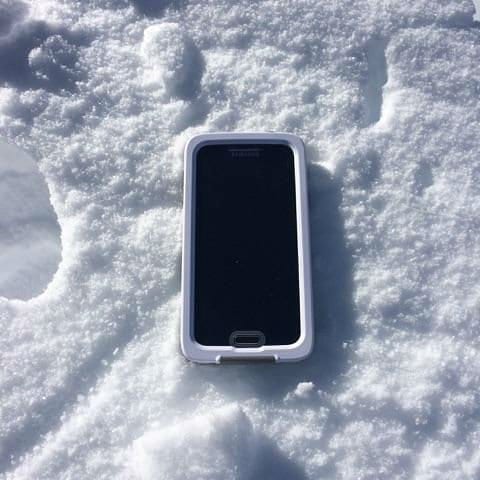 How the LifeProof Samsung Galaxy S5 fre feels in your hand

The LifeProof Samsung Galaxy S5 fre case barely adds any size to the phone, mostly in the width (top to bottom). For me, the Samsung Galaxy S5 is already a big phone and the last thing I want is a huge case to add even more size. The case features rubber along the back and sides, which feels nice in my hand and keeps the phone from slipping with or without gloves on. Without the case, I always felt like I was going to drop the Samsung Galaxy 5. I would love to see the option to add a security loop, similar to what you would find on a point and shoot camera, to aid with action shots or checking messages while on the ski lift.

With the LifeProof Samsung Galaxy S5 fre case in place, the buttons on the outside are easy to feel and use. The power and volume buttons are slightly raised and response without needing a ton of pressure. The home button remains responsive as well. The charge area is accessed by a latch that folds up and down, when down the phone is no longer waterproof. With the case in place, it is easiest to open the charge area with the phone placed screen down and sliding your fingernail along the silver piece on the phone. I don’t have long fingernails at all and found this to be an easy task. 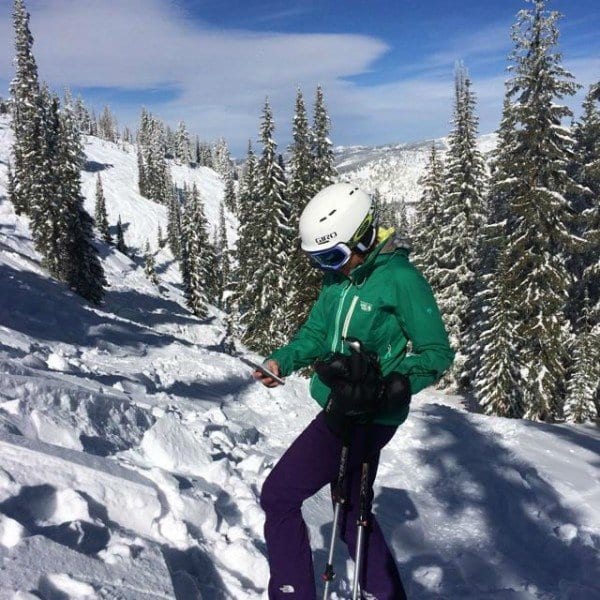 With the LifeProof Samsung Galaxy S5 fre case in place, you can easily use headphones if you are not worried about waterproofness, simply flip open the rubberized cap and plug in. If you want to maintain the waterproof seal, you will need to attach the included headphone adapter. Sound quality was no different with the headphones, but I really noticed a decrease in the volume when talking on the phone or using the speaker function. I have great hearing (at least I seem to think so), but I kept cranking up the volume during phone calls. I believe it is the case and not the phone, as I turn the volume down when I remove the case.

The case is available in 4 colors, black, white, magenta, and teal. No matter the case color, the rear of the case is open to allow for the Samsung Galaxy S5’s color to shine through. I tested out the case in white and gray, depicted in the photos above.  In the future it would be nice to see a few other gender neutral offerings, like yellow, blue, red, or orange.

The price tag for the case is a bit steep at $79. In my opinion, the case is worth it in terms of the protection it offers when I consider the alternative of buying a new phone. If you have any issues with the case, LifeProof overs a 1 year warranty. Overall, I found the case to exceed my expectations in the protection department while keeping the bulk down to a minimum with this case. I was a bit disappointed with the screen protector and sound quality, but will live with this for the protection it offers. For more info visit lifeproof.com