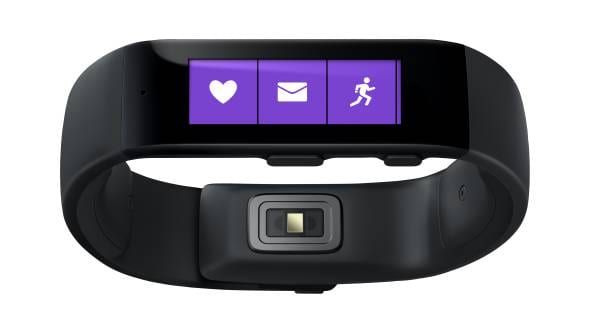 When you think of a fitness band, what’s the first thing that comes to mind? Built in pedometer, sleep tracker, stop watch, and maybe an app that can attempt to break down all that information?   That’s what you get with the average fitness band these days.  Here’s the question, is the Microsoft Band your average fitness band?  The quick and dirty answer is… NO!  When I first started looking into the Microsoft Band, I thought it might be like all other fitness bands and watches with a tad more pizazz, but I was way off, it’s much more. 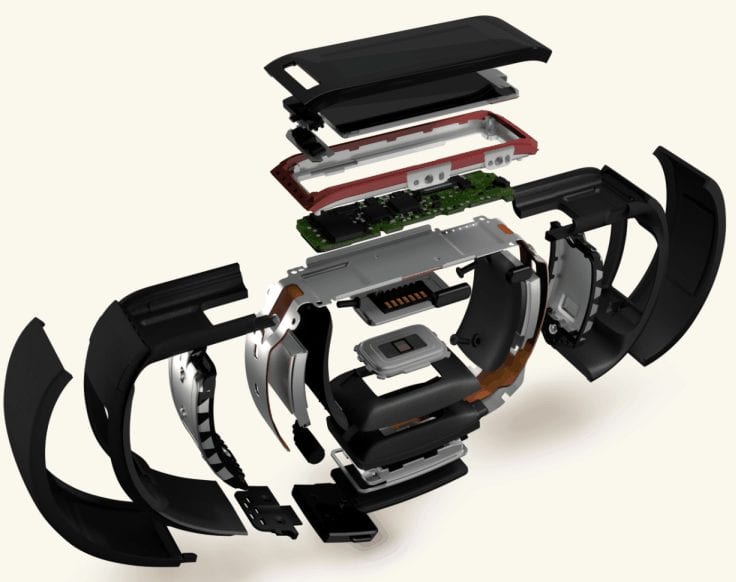 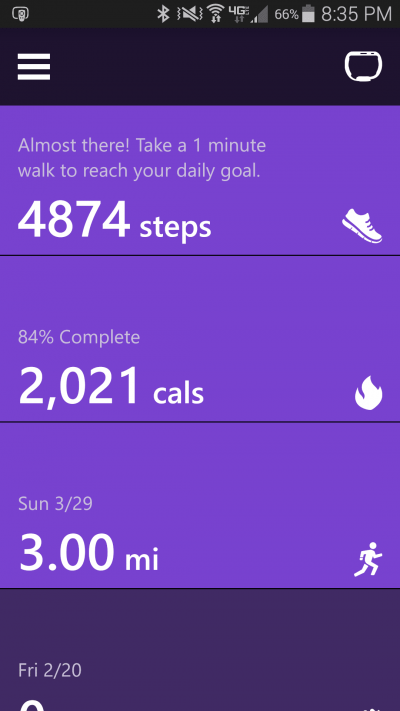 For the athlete and fitness enthusiast out there, the Microsoft Band matches all your request and needs, and then some. For the runner and cyclist, the Microsoft Band comes equipped with GPS to measure everything from distance, elevation gained and lost, and pace.

Running with the Microsoft Band 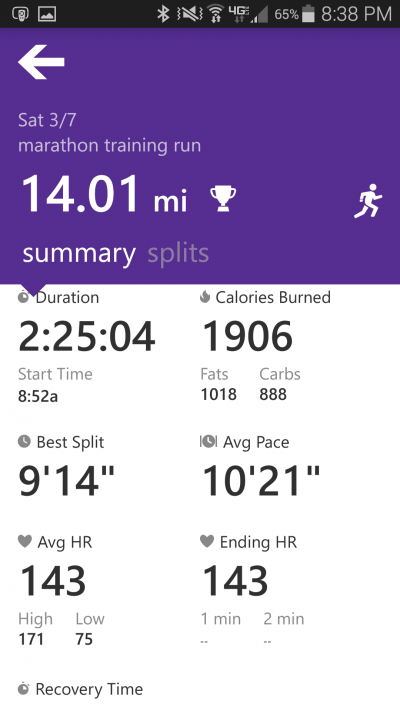 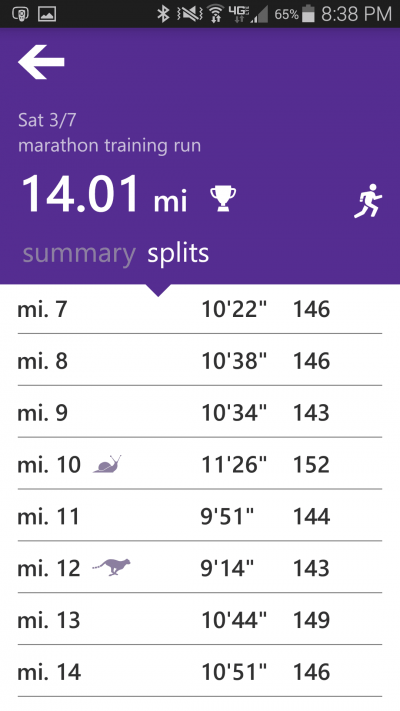 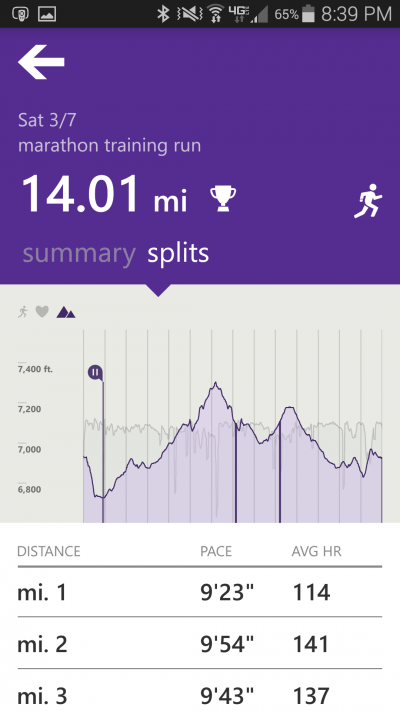 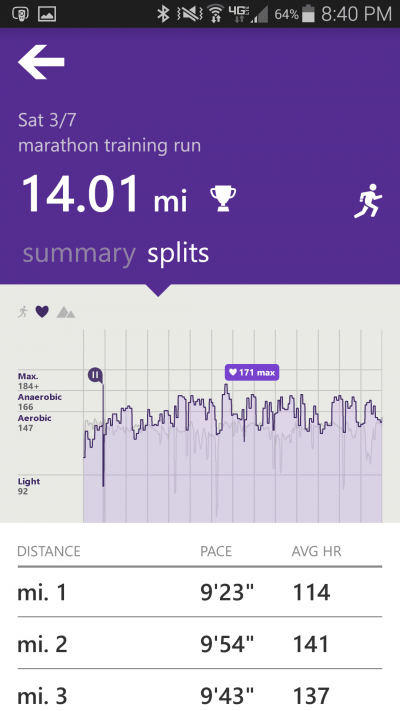 In its current version, The running setting tracks the following:

When I first started running with the Microsoft Band, I have to admit, my expectations were not high because I previously ran with other fitness bands and wearables and liked them, but was not overly excited. Typical fitness bands are fairly basic with estimated distance and steps based on an accelerometer, and estimated calories burned based on your height and weight. For the person who runs a mile or two a few days a week this is ok.  The Microsoft Band on the other-hand is great for runners who take their fitness data a little more serious.  As you can see in the items tracked above, the Microsoft Band operates like a full featured GPS watch and then some. 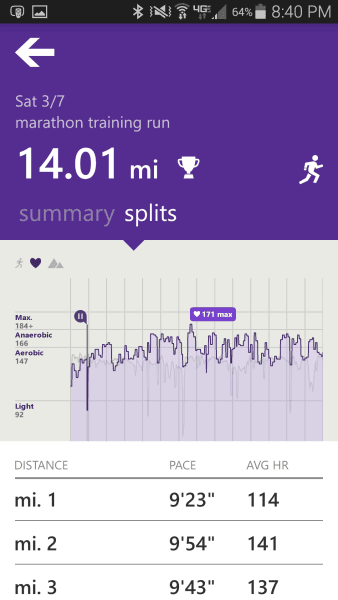 One of the features that I like best about the Microsoft Band for running is the heart rate feature. Through gathering heart rate information with the sensor in your wristband, it eliminates the need to wear a separate heart rate monitor around the chest.  To me, this is less gear that you have to mess with on a run and less that can go wrong.  Through the heart rate information gathered in addition to some of your basic information like your height, weight, age, etc. the Microsoft Band is able to put together a pretty good estimate of how many of the calories that you burn are carbs and fats.  I personally don’t use this information to guide my workouts, but it is pretty spot on as to how you burn more carbs at a faster pace and higher heart rate and less fat.  The slower the pace and lower the heart rate, more fat and less carbs are burned. 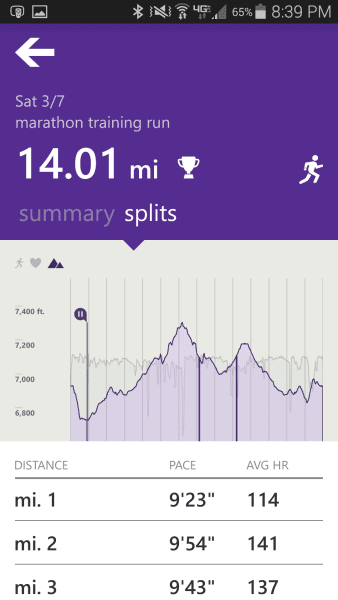 As someone who lives in a Colorado mountain town, elevation is everywhere I go.  Whether I’m trail running, hiking, biking, skiing, etc. it’s everywhere.  That said, being able to see my ascent and descent numbers is important to me.  One feature that I hope they expand upon in the future is providing that data while running, but for the time being, you can get the data after your run when sync the activity to the Microsoft Health app.

While the Microsoft Band is good for many things, there are a couple items that could be better.  What the screen shows while running is a little basic compared to a regular GPS running watch.  I hope in future updates that Microsoft allows for multiple screens to be scrolled through when running.  Currently, there are only two screens that provides time, distance, heart rate, and calories burned.  As a runner, I like to know my pace and avg. pace.  This I assume wouldn’t be too hard to add.  The other downside is that the Microsoft Band only last for 3-4 hours while running GPS.  For longer runs, this is a little bit of a bummer, but I also understand that this fitness band was not necessarily designed for ultra runners.  For 95% of runners out there, the Microsoft Band has plenty of battery.

Mountain Biking with the Microsoft Band

Mountain biking with the Microsoft Band is similar to the information listed in the running section, but there are a few features that make this mode different.  The main difference in the mountain bike mode is the numbers listed while using the band.  Instead of displaying the pace per mile in minutes, it displays your speed as miles per hour.  The other features shown are heart rate, calories burned, and distance traveled. 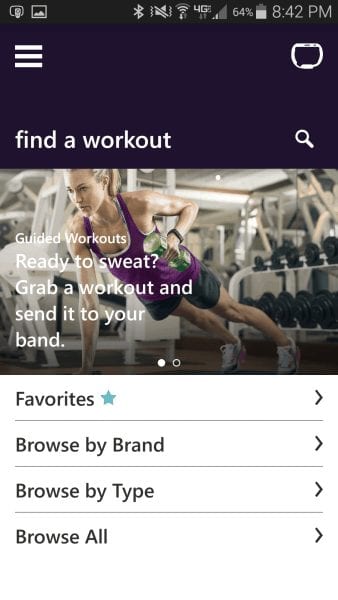 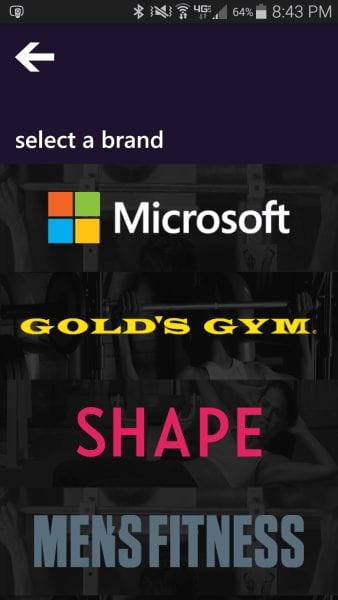 Whether you’re into fitness or not, the Microsoft Band will want to get moving.  I typically run year round and go in and out of gym spurts depending on my schedule and motivation.  The Microsoft Band and Microsoft Health App combine to make one of the best fitness platforms on the market in my mind.  I was completely blown away by all the fitness programs in the Microsoft Health App.  If you like you’re electronics and need a coach to tell you what to do, this App is for you.  There are dozens of program from toning your abs to running a half marathon. 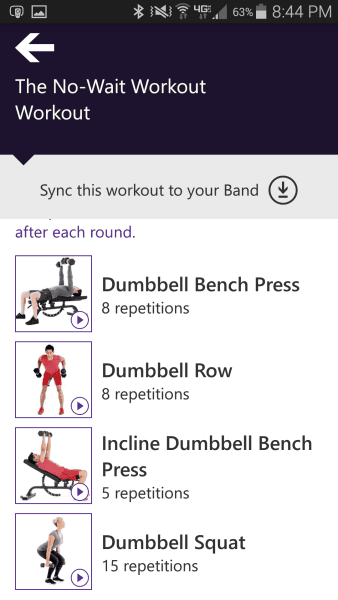 For the traditional person that likes to keep everything on pen and paper, it will definitely be a big transition for you.  For the person who loves to integrate tech into their lives, this will have you drooling and sweating your butt off at the same time. 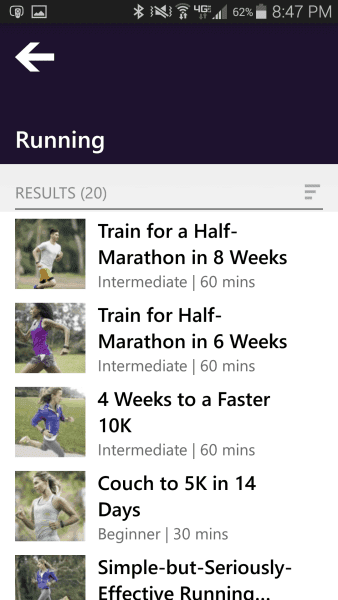 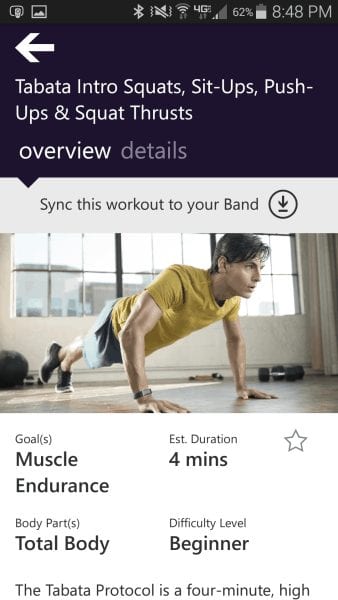 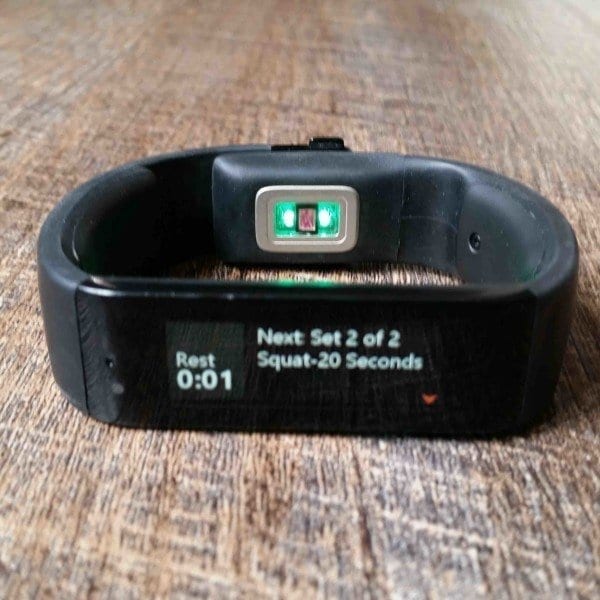 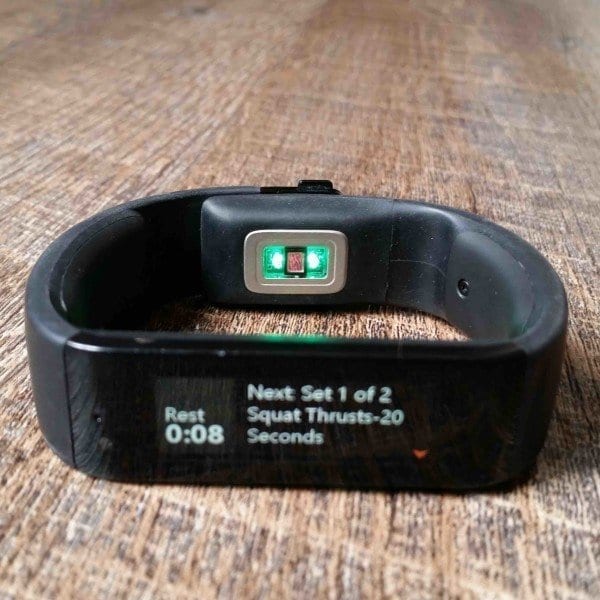 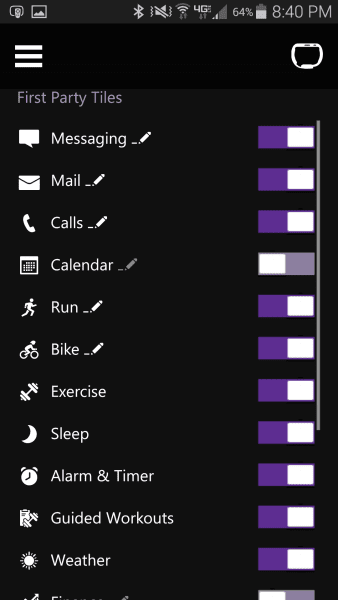 For the technofiles out there, the Microsoft Band is sure to give you something to talk over chat with your friends on the other end of the screen wearing overly tight skinny jeans.  The Microsoft Band incorporates more organization in the band than any other wearable on the market to date (not including smart watches).  The organization features include the following: 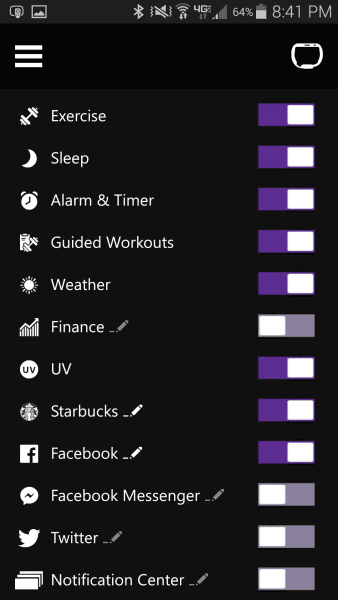 In essence, the Microsoft Band can pretty much pull most of the information on your phone through a bluetooth connection. And you might ask yourself, can’t I just look at my phone if I need or want this information?  For the most part, the answer is yes.  Where the Microsoft Band comes in handy is when your phone is in the other room and your band is sending you alerts like your boss, girlfriend, wife, kids, etc. are calling you.  This has come in handy a number of times as I have left my phone in the other room and an important calls comes in that I needed to take.  As I often leave my phone on silent or vibrate, I often miss calls, but with the Microsoft Band I get the alert on my wrist as someone is calling me.  This feature is not specific only to the Microsoft Band, but it’s still a great feature.  Much like the call notification feature, the other tiles/features such as text messages, emails, facebook alerts, twitter alerts, calendar events, etc. operate in a similar fashion. 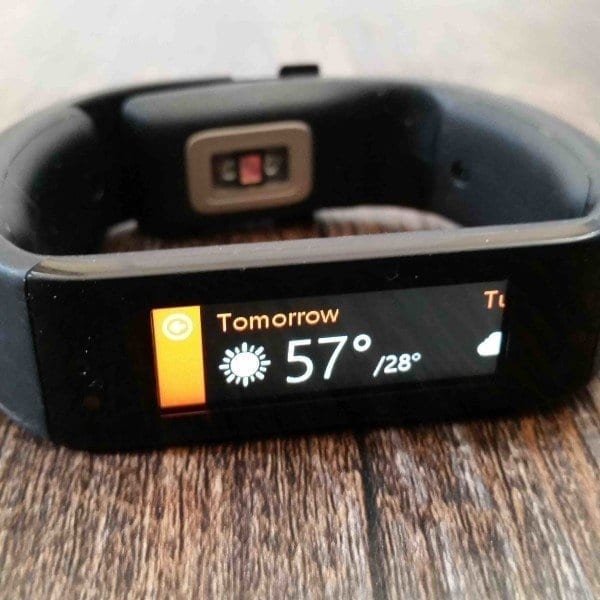 Tracking sleep patterns in fitness bands is all the rage these days and fitness band makers are sure remind you that you’re not sleeping well. I think the more connected we are to our phones, cars, computers, and fitness bands, the more our brains are in constant think mode.  I don’t have a medical degree, by my gut says this keeps us up at night a little more causing us to lose sleep.  Having tested out a few fitness bands with sleep trackers, I have found the data they provide to be interesting, but they don’t help me get more sleep.  I think by providing information on how much we get up, how many calories we burn while we sleep, and a few other pieces of information is neat to know.  The reality is that 99% of us out there aren’t going to do a whole lot more than read the data.  So, this has me asking, what is the value or purpose of a sleep tracker for the average person?  While I think sleep tracking is cool to look at, the majority of you won’t actually do anything with that data. 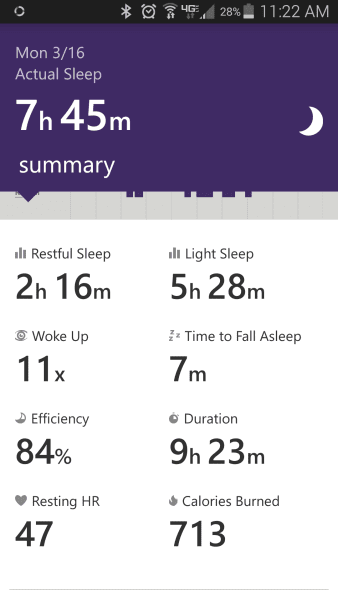 Now that I’m off my soap box, I’ll let you know that the Microsoft Band is able to provide more information than the average fitness band through its integrated heart rate monitor.  This lets you know what your resting heart rate is while sleeping, mine was between 40-50 which was interesting to me and something I can tell my friends over a beer.  The band also estimates your REM sleep cycles which is neat to relive my phycology courses in college.  Once again, I am probably not going to do much with this data. Last, the data tells you how many calories you burn at night which is interesting to know, but I probably won’t base whether I eat 2 donuts for breakfast based on that information.

From a medical standpoint, there might be some information that I am completely missing and if you think there are important uses with this sleep information in which you can take action on, I would love for you to share your knowledge. 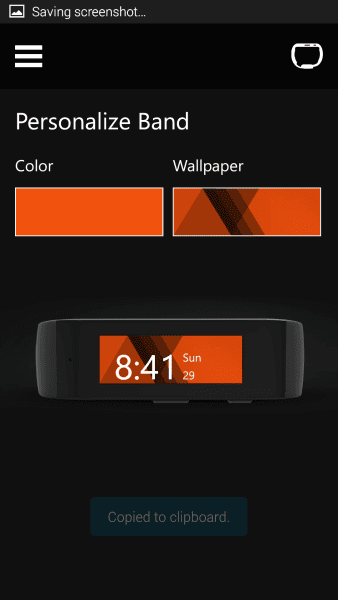 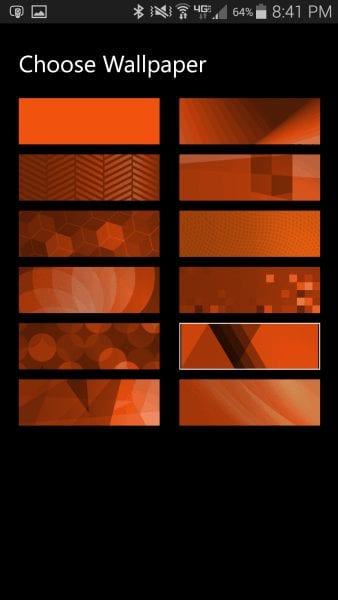 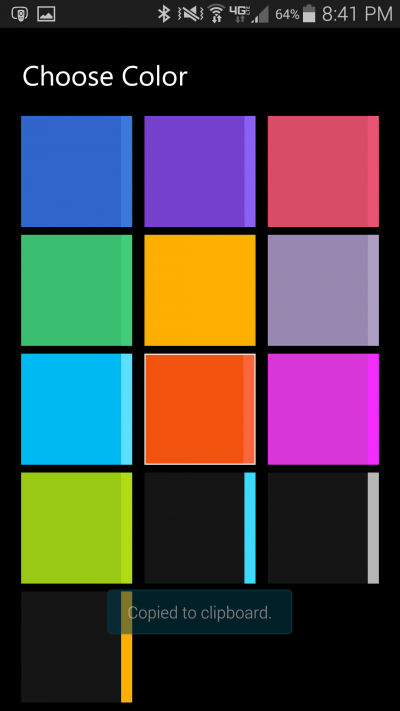 The fit of the Microsoft Band still has some room for improvement in my opinion.  When you first put the band on your wrist, it feels a little awkward which might turn some people off.  Unlike other wearables that wrap around the wrist with a well rounded and comfortable feel, the Microsoft Band feels a little boxy.  The main area of improvement is on the sides of the band where they are squared off which I think could be improved upon.  The fit is definitely not a deal breaker in my mind, but I think it’s worth noting as it takes a little getting used to. 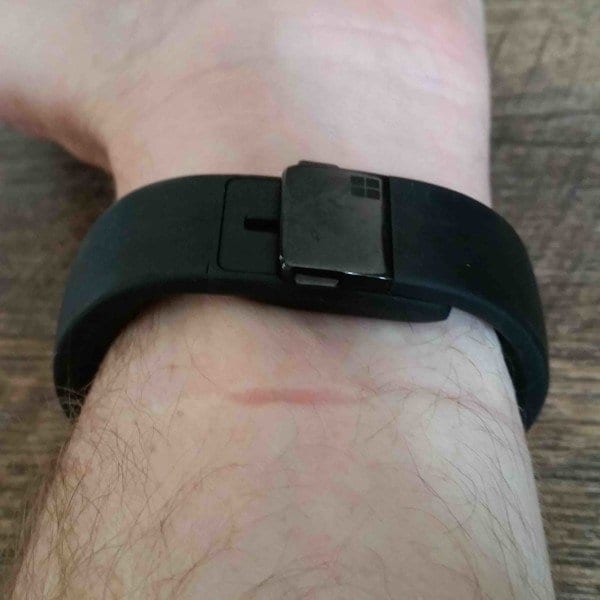 To ensure you get the right fit, Microsoft offers 3 different fit sizes for it’s band.  To get the right fit for your wrist, you are supposed to print out a PDF and then cut out a form to wrap around your wrist.  This is a little old school in my mind as all you really need to know is the circumference of your wrist and you are all set.  I consider myself to be of average size for my wrist and a medium fits great.  My wife also wears my Microsoft Band and the medium also fits her well. There is an adjustment on the band, so you can tighten or loosen as you need to. 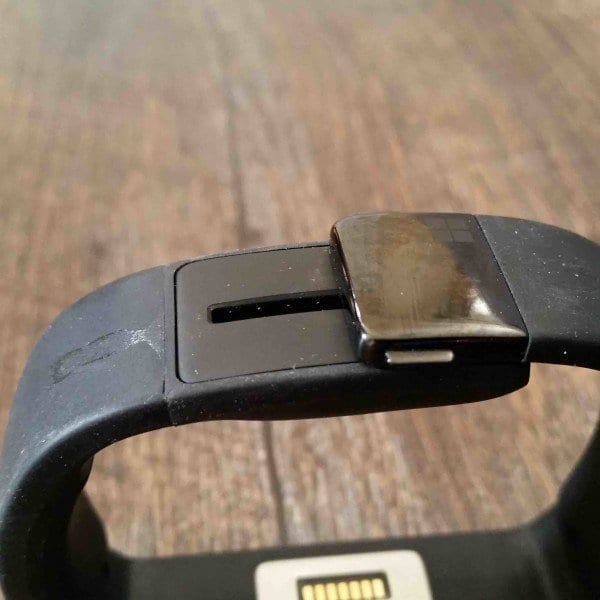 While I thought the Microsoft Band would be another run of the mill fitness band, I am honestly converted to a believer. My wife who likes to make fun of me for geeking out on all the fitness bands has started to steel the Microsoft Band from me which is a testament that this band is for techies and non-techies alike.  The information on the Microsoft page is extremely helpful and their explanations and pictures are great.  I am here to give my real world feedback on to whether I think the Microsoft Fitness band is worth the $199 price tag and if it is helpful for various types of people.  That answer to that is YES, it is definitely worth the $199 price tag and YES it is great for all types of people, especially those who are active.  For more information on the Microsoft Band, please visit amazon.com/microsoftband.