GoPro is the brand that first comes to mind when anyone starts talking about action cameras. Why? Well they have earned their name and have dominated the action camera market space since 2002. When is comes to purchasing an action camera it is hard to go wrong if you decide to invest in the world of GoPro. They stand behind their products, keep them current with software updates, have great customer service, and always seem to be leading the pack in product development. So, how did they do with the GoPro Hero 4 Black? Let’s find out… 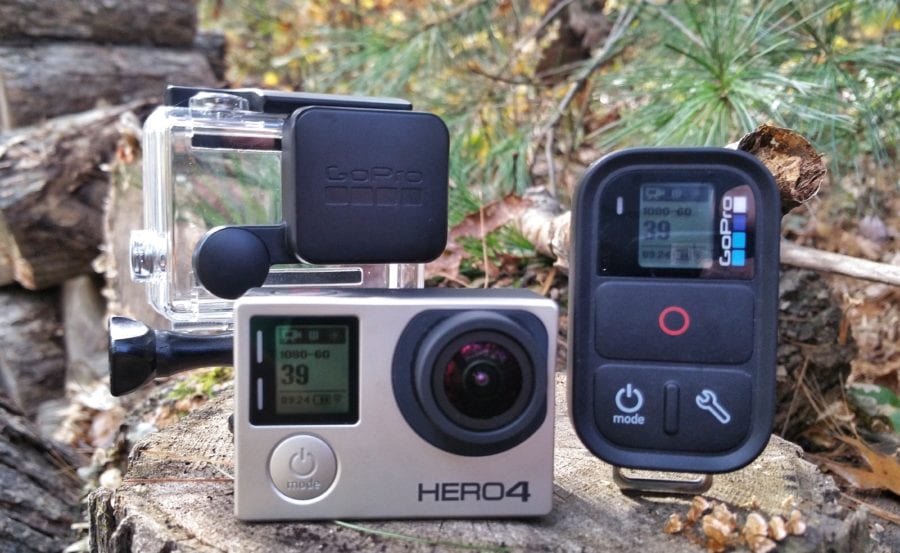 The Hero 4 Black stays with the shape and size that the GoPro cameras have been known for. Without it’s waterproof case, it’s 1.6 by 2.3 by 1.2 (Height x Width x Depth) inches and weighs in at just 3.1 ounces. Within the case the size increases to 2.6 by 2.6 by 1.4 inches and weighs 5.4 ounces. On it’s own it is not waterproof, but when installed into the case it can be submerged to a depth of 131 feet. 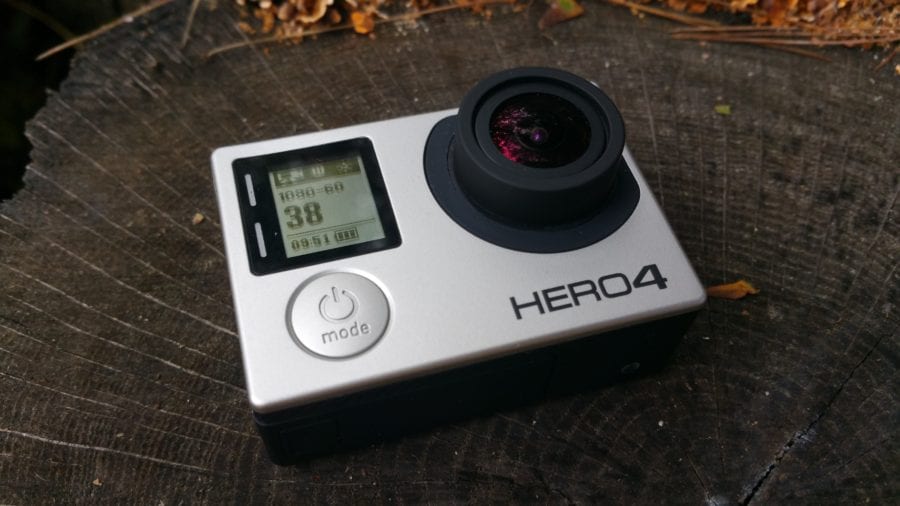 The colorway remains the same, a black body, fronted by a silver face plate. The camera incorporates three buttons, one on top, one on the front, and one on the right side. The front of the GoPro holds the fixed lens that covers an ultra-wide field of view. What is missing from the Hero 4 Black is the LCD screen on the back. Why you ask? According to GoPro, the Black’s super fast processor gives off a lot of heat while recording, and because of that, it wasn’t possible to attach the touchscreen to the action camera.

GoPro does offer a LCD Touch BacPac that will attach to the back of the camera and allow you to see the image that you are shooting, but it will set you back another $80, on top off what is already an expensive device. For a top of the line camera, this feels like a big omission and something that should have been included or already equipped on the camera. 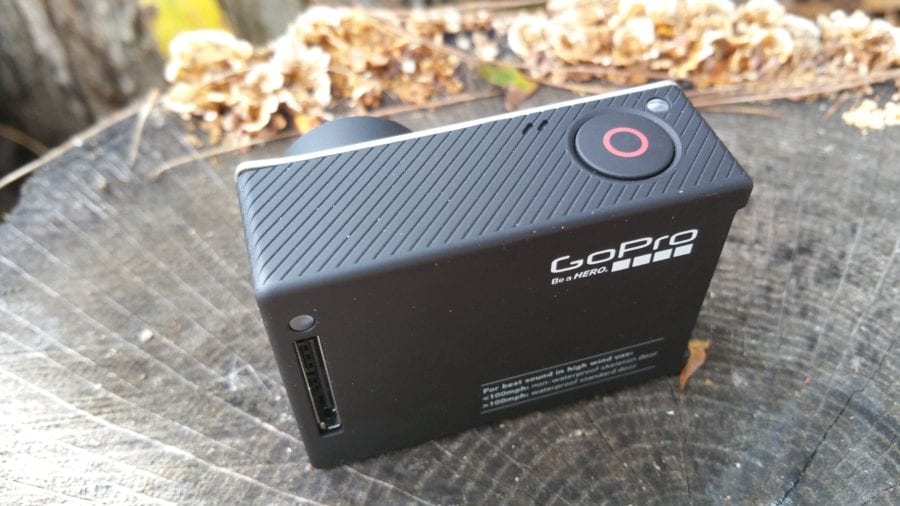 Back of GoPro Hero Black

The small monochrome LCD on the front uses a context sensitive menu system controlled by a separate button located on the right side of the camera, which is a welcome change from the previous model. Thus eliminating the need to press endless buttons to reach a desired setting. It does take some getting use to, but it was a much needed change and makes the use of the Hero 4 simpler and less frustrating of an experience. This button can also be used tag a highlight in a video, making it easier to find that spectacular moment later without having to search through hours of footage. 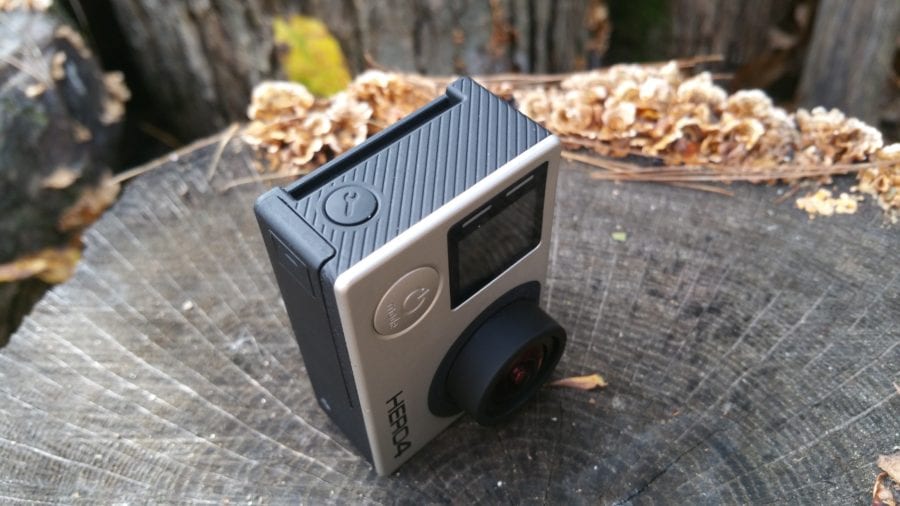 The camera’s battery size and design has changed, it no longer slides in the back anymore, it now drops into the bottom. While this is an improved design that makes it easier to change the batteries, you will now have to buy new ones if you choose to upgrade your previous model. 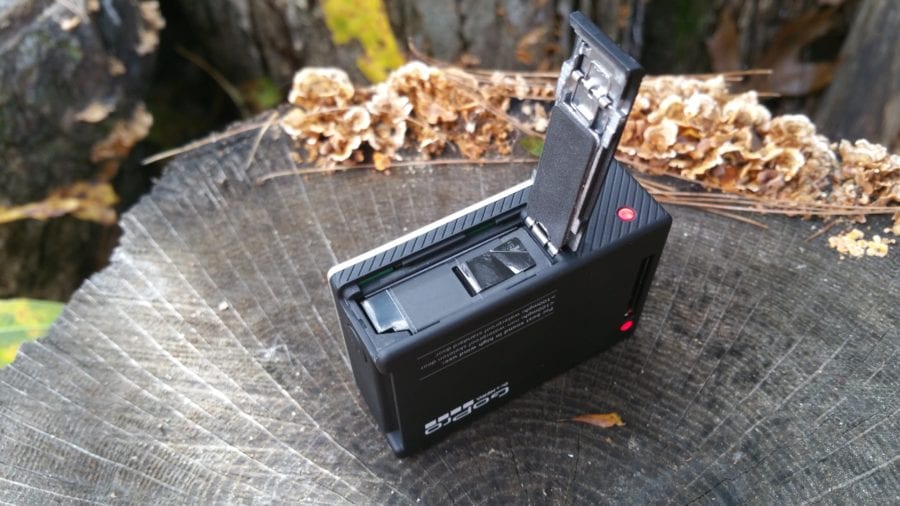 Battery life always seems to be an issue with action cameras, and the Hero 4 is no exception. This camera eats batteries like an ultra marathoner consumes calories. Shooting at 1080p and 30 fps, the camera will almost give you about 90 minutes of recording. Bumping up the frame rate and the resolution and the battery life just goes down hill. Beyond not having a LCD screen this is undoubtedly the biggest negative to the camera. The good news is, spare batteries are fairly cheap and don’t take up a lot of room to haul them along on an adventure. This is the price that is paid for having such a small camera and asking it to shoot cinema quality footage.

GoPro has also stepped up the audio quality with a analog-to-digital converter and a microphone that captures high fidelity sound with twice the dynamic range of previous models. It is also possible to record from an external source using a separately available 3.5 mm mic adapter.

The GoPro Hero 4 Black delivers twice the performance of its predecessor and captures cinema quality 4K video at 30 frames per second, unheard of in a small action camera. The frame rates for 2.7K video pushed to 50fps and 1080p video at a mind blowing 120fps, virtually eliminating rolling shutter.

The Hero 4 provides unparalleled resolution and frame rate combinations and the video quality is quite simply magnificent. The results look amazing on 4K screens and for those that don’t have those pricey displays, the option of cropping to some excellent 1080p video is always welcome. This helps with the all to common action camera shakes. On that note, it would have been nice to have seen some video stabilization technology implemented into this camera. Frustratingly, the technology is there but still did not make it this model.

Advanced users can take advantage of the ProTune editing options which unlock a vast array of manual controls to improve both videos and photos. This includes full control of the white balance, sharpness, ISO limit, color and exposure.

“A common pain-point is deciding between capturing video or photos of an experience,” stated Nick Woodman. “Each frame of 4K30 video is similar to an 8.3 megapixel photo. The result is that users can simultaneously capture eye-popping 4K30 video and impressive 8.3 megapixel photo-like video stills at 30 frames per second when using Hero 4 Black. It’s one of the many wild capabilities of this impressive new device.” 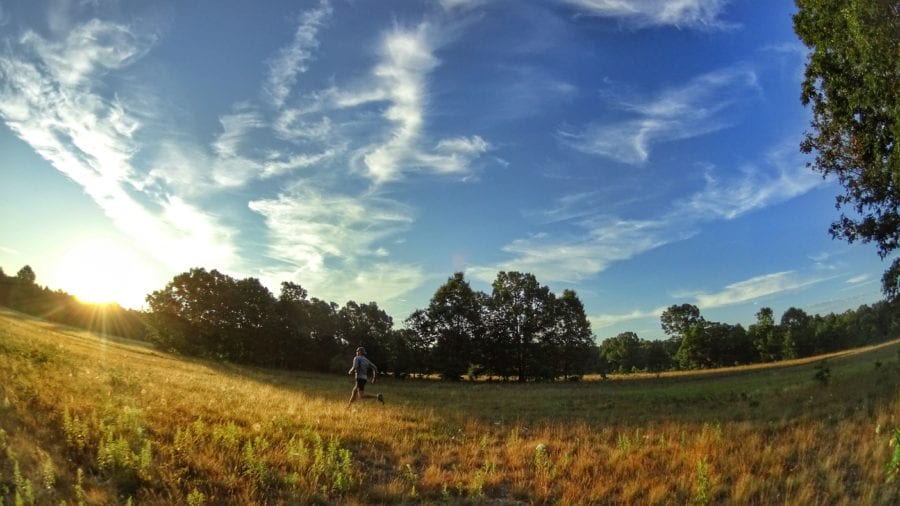 GoPro offers a free download of GoPro Studio for your computer which makes it easy to import GoPro footage from your camera to your computer to create professional-quality videos. Studio features GoPro Edit Templates that are template versions of some of GoPro’s most popular videos.  All you have to do is replace the original GoPro video clips with your own favorite clips and the editing style that has made GoPro famous becomes your own. Studio also supports the Hero 4’s HiLight Tag feature, making it easy to identify your videos’ best moments thereby allowing for faster and more convenient editing. Also included is Flux, a powerful ultra slow motion and speed ramping tool that enables the dramatic time-shifting effects GoPro has become so well known for. Want to highlight a particularly awesome moment in one of your edits? Flux that thing and share it with the world. 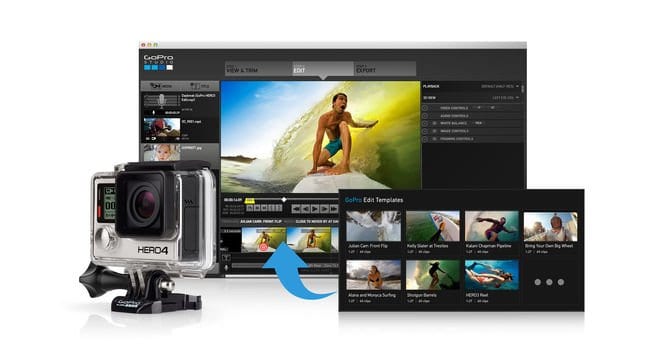 The GoPro App for Android, iOS and Windows Phone remains the best option for setting and controlling the HERO 4 Black. The app provides the link between your smartphone and camera through Wi-Fi or Bluetooth and provides a live video remote interface that gives you full control of HERO 4 Black and allows for quick and easy changes to any mode or setting, it also gives you instant access to the GoPro Channel and all of the incredible content that has made it the number one brand channel on YouTube. The expanded GoPro App support for the HERO 4 includes HiLight Tagging while recording, as well as searching for tags during playback.  As always, the GoPro App also allows for shot preview, playback and sharing of your favorite photos and videos via email, text, Facebook, Twitter and more. 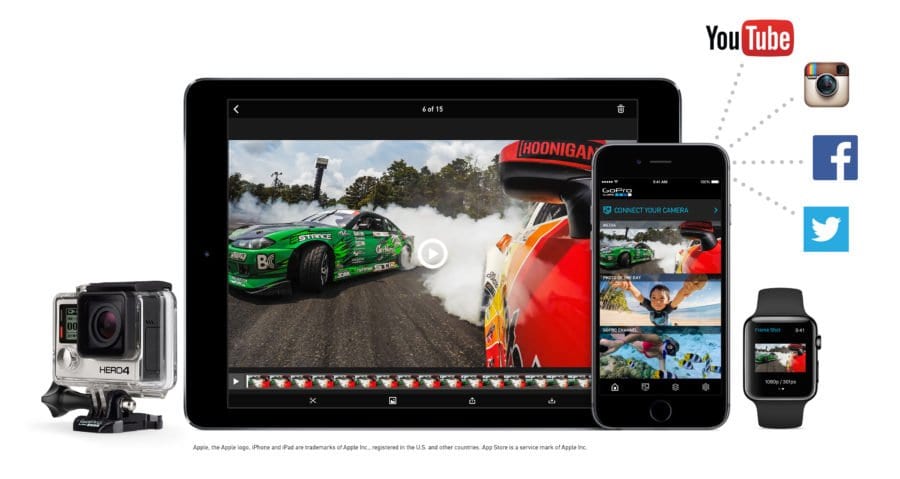 The GoPro Hero 4 Black is the highest video quality action camera that I have ever tested and does a fantastic job at capturing it. With the incredibly high resolution and ability to capture such high frame rates this is a very attractive camera for advanced users and the main reason to consider the Hero 4 Black over any other action camera.

For more information or to purchase, visit: www.gopro.com