New Balance’s Minimus has been around for several years now and continues to grow and evolve. The Minimus 10v2, to my understanding, is an updated version of the original Minimus 10 road version. To be honest, I have a difficult time telling the true differences – aside from aesthetics between much of the minimus line. 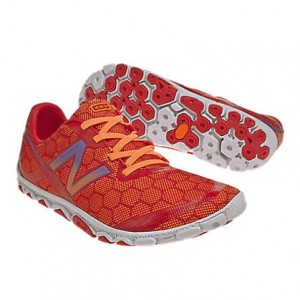 When I initially put the Minimus 10V2 on, I felt that the shape of the shoe was a bit awkward and made them feel too small. The shape is a bit more offset to the midline, meaning that the longest portion of the shoe is toward the inside, with a wide forefoot that primarily extends to the outside. In addition, the Minimus 10V2 has a decent amount of rocker to it. Both the heel and toe are off the ground and only the midfoot is touching when they are resting on the ground. I think this may have contributed to the initial snug feeling. 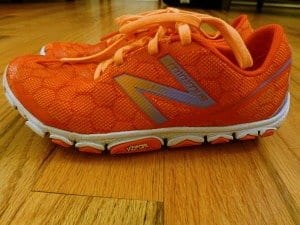 After wearing the Minimus 10V2s for a few short walks and jogs, I began wearing them as my daily go-to shoes for indoor conditioning workouts that involve a lot of short sprints, jumping, quick directional changes, and strength training. I also took them out for shorter distance (~5 miles) road runs. Once I started wearing them in a more practical setting like this, I began to like them more and more. The low profile kept me close to the ground and I never felt unstable or like I could roll or twist and ankle. 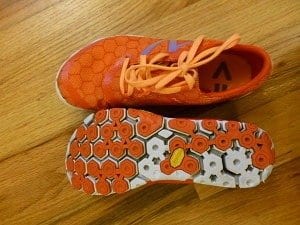 The Vibram outsole did a fantastic job of providing support and energy absorption during high-impact workouts which was a welcomed surprise. I often find minimalist shoes with Vibram soles a bit harsh when I’m doing a lot of pounding activities, but the Minimus 10V2 has a 2-3 millimeter honeycomb shaped Vibram lugged outsole affixed to their RevLite foam which also has the honeycomb pattern and is 5+ millimeters thick in some places. These two materials combined for the mid and outsole provide a firm base while still offering some cushioning. 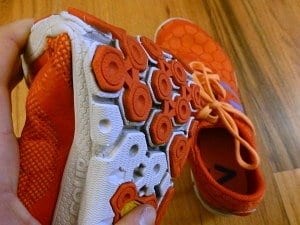 The uppers are seamless and constructed of  a tough, but thin and flexible material that mold to your foot shape. With little cushion or structure to the uppers, it lessens the chance that they will rub or cause discomfort to most foot shapes. The tongue was one area that I felt could be revamped a bit. It is a single piece that wraps from the medial side of the shoe to the lateral side, laying under the lateral laces. It didn’t’ cause discomfort and really wasn’t noticeable, but every time I laced them up, the tongue was wrinkled and I couldn’t get it to lie flat. It caused me no trouble, I just fussed with it on a regular basis

I personally am not one to go sockless, but if you’re interested in that, I cannot see that there would be any trouble wearing the Minimus 10V2 without socks. The interior is soft, absorbent, features flat seams, and the transition from the footbed to the uppers is extremely smooth.

The overall fit of the Minimus 10V2 seems true to size for a minimalist shoe that hugs your foot – average length, wider, but shallower toebox, and lower instep height. The heel-toe drop is 4mm, and the women’s size 7s I am reviewing weigh in at only 5.2oz. The Miniumus 10V2 is available for men and women in three color variations each.

Although I have  several shoes inline for me to take out on a test drive, I’ve had a hard time pulling myself away from these. They are excellent for running on smooth surfaces and cross-training. I would be hesitant to take them on a gravel or dirt trails because rocks could get stuck between the honeycomb lugs quite easily.