Spirit of a Runner After Boston 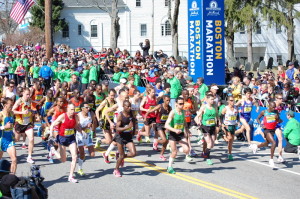 Whether you are a runner or not, April 15th , 2013 was one of the worst days in running around the world.  The despicable act of violence the terrorist carried out on the day of the 2013 Boston Marathon was no more than an act cowardism.  The total number of killed to date is 3 people including an 8-year-old boy and over 130+ injured.

There were hundreds of interviews across all the news channels with questions such as what were you thinking while this happened and will you ever run a marathon again.  On the day of the terror and the following week, the people of Boston and the runners that ran Boston will have lots of questions going through their mind.  Questions like, will these terrorist target Boston again? Will they target other marathons?  Will they target other races?  The answer to this is we don’t know, but me must carry on.  Terrorist make senseless acts like these to change the way we live and if we react by living in fear, we let them win.

Why they chose the Boston Marathon

The possible reasons why these terrorist chose to attack the Boston Marathon is multi-purposed.  First, this is a historic American event that has a lot of heritage and pride behind it.  Second, an event like the Boston Marathon and other large races have a lot of people packed into a small space.  Third, it happened at the finish line where most media and journalist are located so they would be sure to get a lot of coverage.

Races in the Future

Moving forward, security at future marathons and running races will have to be increased.  This will initially be an inconvenience  for runners but these are the days we live in and we must adapt to this change.  Looking back at other marathons I have run including New York, Chicago, Los Angeles, Seattle, San Diego, Denver, and others, it seems that police and security are often more concerned with crowd control than looking for terrorist.  The problems that marathons faced in the past have been runners jumping into faster waves, running out of water, and the occasional runner that pee’s on a bush on the side of a course.  These problems will continue to exist, but more important issues are upon race directors and the police.  The marathon experience as we know it will be a little different, but will still be amazing and potentially life changing in a good way.

Running has always been a positive activity in people’s lives and will continue to be for ages to come.  I have never talked to someone during or after running and had them tell me they feel bad about themselves.  During and after every run, endorphins are flowing through a runners body making them feel good about themselves and good about life.  It is very rare when running doesn’t make you feel better than before you started your run.  2 hours after the 2 explosions at the Boston Marathon, I decided to go out for a run to escape from all the negative news and clear my head.  That day, it was dumping snow in Colorado and I couldn’t see more than a hundred yards in front of me, but I knew that it would help me clear my head and make me feel better.  While these circumstances of the terror in Boston and dumping snow were a bit out of the norm for me, it doesn’t change the fact that whether you are running a marathon or doing a training run, you will generally feel better about yourself and life.  Runners know this and will continue to run.

To answer the questions of whether people who ran the Boston Marathon this year will run this race or another race again, the answer is runners will continue to run races.  Out of all the people who terrorist can attack, one of the last people they should have known to attack is a runner.  Runners are determined individuals and they generally think and act with a clear mind.  99% of them will not react in haste, but  they will take this senseless act and use it as motivation to do good for society.  After all, runners raise hundreds of millions of dollars each year for causes and charities for people who many of them don’t know.

In the end, marathons and other races will evolve and change to adapt to the rising levels of danger, but our spirit of running will not falter.

After browsing facebook and twitter, I am seeing there are a lot of runners embracing the will to keep on running.  There are a couple other good articles that I have run across that include an article by our friends at Elevation Outdoors Magazine and ESPN/Competitor.com

( If you have any additional 2013 Boston Marathon related articles that you think are worth sharing, please share the link with us in the comments and I will include it in this posting)