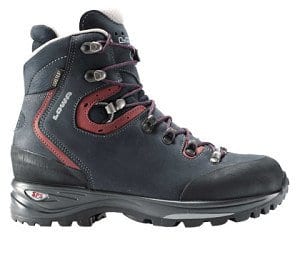 Named after a mountain range in Switzerland, the Lowa Albula GTX WS is designed to take you where you want to go, whether near or far. The Albula GTX WS is women’s specific backpacking/trekking boot, hence the WS acronym. Lowa is known for making high quality mountaineering to hiking boots, therefore their standards or definitions of boot classifications are slightly different than what a weekend warrior may be used to. With that said, Lowa classifies the Albula as a lighter weight boot within their backpacking line. With the Albula’s weighing in at 2.7 lbs for a pair of women’s size 6.5’s, some of you may have some dropped jaws, especially with the trend towards minimalist road and trail shoes. However, these boots pack a punch when it comes to stomping out the elements, thanks to some great features.

Here are some of my first impressions: right out of the box these boots were comfortable, there was no real break in period and I was able to hike for 7 hours, mostly uphill, without any hotspots or blisters. The GORE-TEX seamless liner also played a roll in the comfort of my tootsies after many hours on the trail. Despite heavy exertion, my feet remained nice and dry. The no break in period is also due in part to a soft and flexible Nubuk leather upper and Lowa’s Flexfit, which allows for a more forward flexion in the ankle region. The heel region was plenty narrow for my heel, which can be a problem in some hikers that aren’t designed for a woman’s foot. There is also a cut out in the boot to prevent rubbing near your Achilles tendon.

The boot features an easy x-lacing system with 3 metal rivets on each side to pull the laces through and a tongue stud. You are probably wondering what a tongue stud is; well it is a stud, or piece of metal in the middle of the tongue to help the laces redistribute some of the pressure away from the middle of your foot. The tongue stud eliminates or prevents the wearer from cranking down on the laces-creating a hotspot and causing your toes to fall asleep because they are too tight.

The Albula’s feature a 5mm shank in the heel and 3 mm shank in the forefoot to truly protect your foot. Pair the generous shank with the aggressive outsole, and the Albula is ready to tackle a scree field (if in a pinch), as well as the standard trail. These boots feature cut outs for crampons to easily slip onto if needed. The footbed has been relatively comfortable, providing a bit of cushion, however those with a higher arch may need to use inserts. Plenty of motion control or support in the ankle region, however a tad less than you would get with a trekking boot geared towards carrying more weight.

I have had the Albula GTXs for about 3 months now and have used them for winter trekking and snowshoeing with carrying weights of 20-40 lbs, and on dry-maintained trail systems with a few lbs of essential gear. My feet were comfortable with the higher weights and did not have added fatigue or strain at the end of the day. When paired with some gaiters, these boots have been quite versatile in the winter months. My feet rarely sweat, so it is hard to attest to the breathability of the boots: with that said, they do feature small openings within the liner to allow air to flow in and out of the boot. These openings do not allow unwanted moisture in and the boot has been 100% waterproof thus far. They run true to size and are available in 1/2 sizes from 5-10.5 in regular and wide.

The Albula GTX WS have replaced my old Sundowners (by Vasque) as my go to boot this winter and I look forward to longer treks this summer with them.

Like all Lowa products, they are crafted in Germany and carry a MSRP of $289