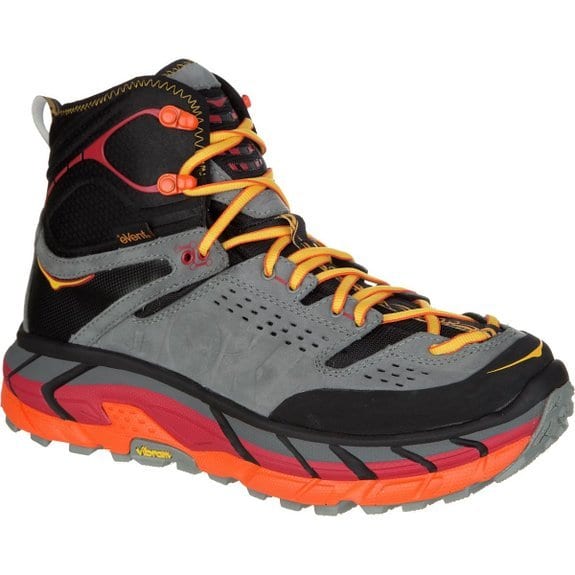 Hoka One One, after making a big splash on the running scene (if you haven’t seen any of Hoka’s offerings to the ultra cushion revolution then you probably just don’t get out enough; either way, check out our review of the Hoka One One Bondi 4 here), has elected to branch out slightly and make it’s way into the realm of hiking boots. To me, this is a fairly logical conclusion – the extreme comfort provided by over cushioning a running shoe would (in theory) translate nicely into a boot designed for wearing for hours on end. The Hoka One One Tor Ultra Hi WP, slated for release this fall, aims to do just that – bring maximal cushioning into sport themed Hiking boot/shoe hybrid.

Initial Thoughts on the Hoka One One Tor Ultra Hi WP

Much like the first run I took in the Bondi 4, the first time I slipped the Hoka One One Tor Ultra Hi WP on my feet for a quick walk around the house and over to the mailbox, I was immediately in love with how comfortable they are. Go to any running store and try any pair of Hoka One Ones on – you’ll see what I mean. There’s truly no comparison in the footwear market for how comfortable Hoka One One feels. Even if you’re familiar with the lineup and have tried out other offerings, it’s a dramatic change. My wife actually had to tell me to stop wearing them in the house – you just don’t really want to take them off. 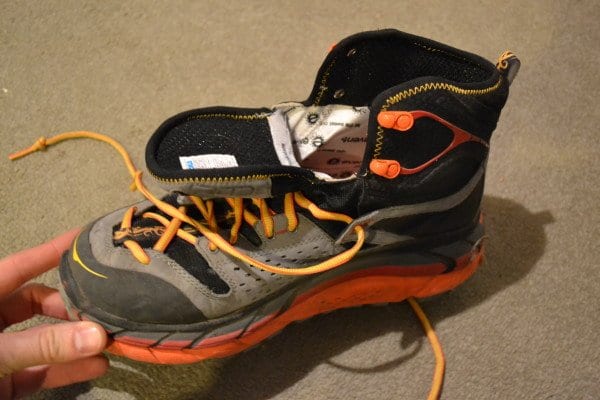 Looks… can be deceiving. These feel pretty awesome.

Testing the Hoka One One Tor Ultra Hi WP

My testing phase for the Hoka One One Tor Ultra Hi WP included a few short hikes (less than 5 miles) in the foothills near my house in Colorful Colorado, and then a weekend car camping excursion with the family during which I only took them off to sleep. I wore them both with and without a pack – two packs, actually as we brought both a large pack (for testing) and a kid carrier by Kelty – my pack weighed in around 20 lbs, and the kid carrier (with child) weighed around 25 lbs. I also gave several shoulder/piggyback rides over the weekend wearing the Hoka One One Tor Ultra Hi WP, which gave me an added shoulder weight of 32 lbs of tired 5 year old. Fortunately for us, we didn’t run into any rain/bad weather over the weekend, so I had no ability to test the water proofing of the boot – bad for testing, good for us. My sense after testing, though, is that the water proofing is pretty much legit, with the exception of a few entry points into the boot. One thing I can tell you – waterproofing tends to lead to a lack of breathability, which is miraculously NOT present on the Hoka One One Tor Ultra Hi WP. My feet were cool and dry the entire testing phase, even in the hot Colorado summer temps. 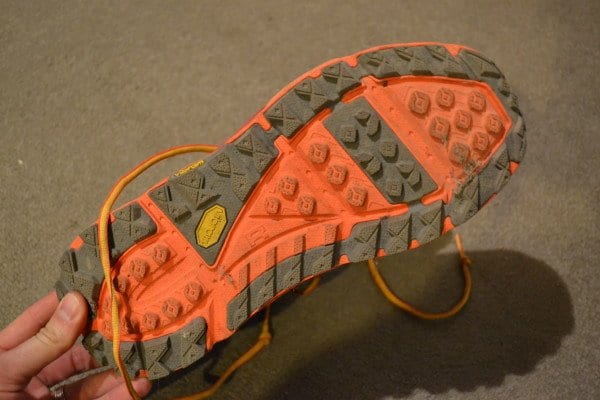 The lacing pattern is similar to what you see in other offerings across the industry, with eyelets up to the ankle and hooks above. The Hoka One One Tor Ultra Hi WP, unlike other offerings, did not come with an additional “thick” foot insert – I missed this, as the Hoka One One lineup tends to run a bit big. I even went down a half size to accommodate for the hiking boot “style” (pro-tip there – always go down a half size in hiking boots – don’t learn the hard way like me. Even though the lacing is solid, I never felt like I could get them quite as tight as I liked, especially when using a summer weight hiking sock in merino wool. This led to a bit of instability under load – when I was hiking around with only a day pack or belt pack, I had no issues. When I loaded up the kid in the carrier the Hoka One One Tor Ultra Hi WP felt a bit unstable due to the lack of lock down. And yes, before you mention it in the comments – I used the double eyelets and various lacing patterns. It didn’t really seem to matter.

The ankle construction on the Hoka One One Tor Ultra Hi WP is much more akin to a light hiker/day hiker than a trekking boot, and is made of a neoprene-like material. Once again, it’s really, really comfortable and made all day wearing a breeze. It was also really effective at keeping dirt, twigs, and other detritus out of your boot all day. I loved that part, as I hate picking stuff out of my socks at the end of the day. It didn’t offer much in the way of support, though – it wasn’t intended to; if you’re looking for a really stiff ankle collar, you’ll need to look elsewhere. 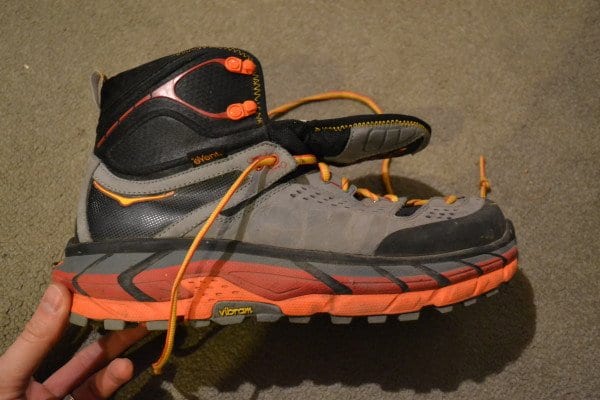 Hoka One One chose to use Vibram for the outsole construction, but with a slightly grippier twist than your standard offering. The outsole is slightly soft, and allows for excellent grip on just about all surfaces – as mentioned above, I didn’t test them out on any wet surfaces but I did get them on just about every surface that Pike National Forest has to offer. I always felt secure when finding purchase climbing up a trail, and felt sure footed on all descents. The marriage between outsole and midsole (read maximally cushioned midsole) is excellent as well – I had no hotspots or sore spots after multiple hours of wear, and really the only issue I had was with the cushion itself. It was great for hiking without load, but as mentioned above, any load made the midsole feel less stable. When under load, I felt as if I was on the verge of rolling an ankle. To be fair, this diminished slightly as the testing phase went on and my equilibrium adjusted to the maximal cushioning. This is really just more of a personal preference thing, as I have several runner friends who love the feel of maximal cushioning and aren’t bothered by this precarious feeling. To each their own.

Final Thoughts on the Hoka One One Tor Ultra Hi WP

For more info on the Tor Ultra Hi WP and other Hoka footwear visit www.hoka.com.